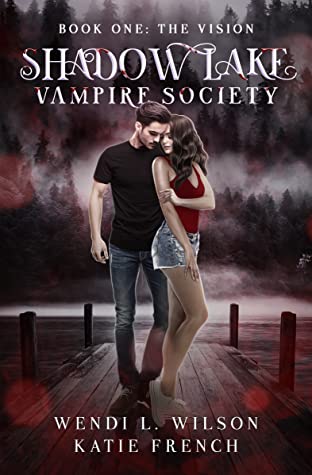 The summer after Senior Year should be all parties and fun, but for me, the world is about to change. Determined to break out of my reclusive shell and move past the trauma of my father’s unexpected death, I take a job at Camp Shadow Lake, a place where nothing is what it seems.

Every counselor is beautiful and aloof, including Levi Kass—who is as hot as he is hostile. I don’t know what I did to make him hate me, but he seems to want to eat me alive. How can someone so gorgeous be so menacing?

But hot-as-hell Levi, with his dark stares and spine-tingling glances, is the least of my worries. A year ago, someone or something killed my father, and the more time I spend at Camp Shadow Lake, the more clues I find.

They say it was a bear attack. Bear attack, my ass. Something much more insidious killed my father, and it might be hiding out near Shadow Lake.

When I go looking for answers, I experience a shocking vision—one that shows me my days are numbered.

Someone is going to kill me, and I need to figure out who before it’s too late. Will Levi save me or will I have to save myself… from him?

If you love The Twilight Saga and The Vampire Diaries, you’re going to have a great time at Camp Shadow Lake. Don’t piss off the counselors—they’ll eat you for breakfast.
Shadow Lake Vampire Society contains scenes with violence and some mild language.

I was lucky enough to be asked to beta read this book by Katie French. I hadn’t really read anything with vampires in it for a while and I felt like having a bit of a genre change so eagerly began reading this book.

The main character in the book is Piper Williams and the action begins with her going through an extremely traumatic experience. Piper is in a wooden cabin with her father who knows they are in danger so he hides her under some boards in the cabin floor. Piper listens to her father being killed and blood actually drips through the floorboards onto her. Piper isn’t discovered until 2 days later so obviously she suffers a kind of post-traumatic-stress-disorder and is sent to see a therapist called Dr Whitely. Piper has been told it was a bear that killed her father. Piper has flashbacks though she is learning to deal with the effects of the anxiety they cause. Piper can remember hearing boots and a door slammed open like a human would do, but when she says this no one believes her and they immediately shut down and tell her bears killed her father. The only person who stays by her side and believes what Piper remembers is her best friend Coco. It is suggested by Piper’s mum and Dr Whitely that being a counsellor at Shadow Lake Camp would be both good for her and the children she would be able to help as well as look good on her future resumé.

Piper at first reluctant slowly comes around to the idea. I think the thing that finally pushes Piper to say she will go to Shadow Lake Camp is that it is revealed her father was once a counsellor there too.

On arrival at Shadow Lake Camp Piper meets the Dean who is called Charles Purty. Charles/Dean Purty gives Piper a quick run-down about how things work. He informs her she will be the head of Saka’am cabin along with fellow female counsellor True King. It quickly become apparent that the other counsellors are not going to make Piper feel welcome or allow her into their exclusive little group. True explains its her second year at the camp and they were exactly the same last year and she just let them get on with it. Sarah seems to be the leader of the “cool good-looking gang” and the others Micah, Ian, Naveen, Analise, Miranda, and Lars seem to follow her lead. The only one who seems to stand out from this little gang is Levi who isolates himself a little from the other counsellors preferring to eat and spend time with the older members of staff such as Dean Purty and his assistant Sasha, and resident nurse Barbara.

Of course, my favourite character was Piper, she’s been through a very difficult time but is determined to come through it, and fight the flashbacks and the anxiety they give her. I adored the way she referred to herself in the book by either how she was feeling or what emotion/image she wanted to show the people around her. She can become “Bubbly Piper” or my favourite “Badass Piper”. There is an immediate chemistry between Piper and Levi. To begin with Piper understandably thinks the aloof, scowling Levi hates her for some reason. Things get worse when Piper overhears Levi suggesting to Dean Purty that he send her home. I also really liked the character called True King, though initially I felt a bit put off by her name, later in the book the reason behind her name is revealed and I guess it does really fit that True is her name. True and Piper quickly become close friends, so much so that Piper shares what she thinks about her father’s death, the fact everyone says it was a bear, despite her saying she heard boots hammering on the floor.

I loved the writing style it flowed so well and made the book a quick and easy enjoyable read. Levi is most certainly the “book boyfriend material” for YA readers, though I must say Dean Purty sounds …er….quite handsome too for those of us that are older not YA aged readers of the book!

Within the blurb this book is compared to The Twilight Saga and Vampire Diaries which I do agree with but I would also compare this book to Knights Academy by Emerald Barnes and Vampire Academy by Richelle Mead. Also there is a warning that the book contains scenes with violence and some mild language, to be honest I think YA readers would probably see/hear worse on TV programmes these days.

My immediate thoughts upon finishing the book were that it covers some difficult subjects, murder, mental health, grief, confidence, bullying, peer pressure, love, as well as some great paranormal issues such as vampires and their etiquette of drinking different types of blood and how to talk to them so you don’t literally get bitten or killed!

To sum up I am honestly looking forward to more in this series. The book ends with one heck of a cliff hanger! I also had so many questions, and despite Piper snooping and asking many questions she has yet to find out who/what killed her father. I am also super interested in learning more about Warren Thornberry and his society. I also wonder how the series will unfold will it be set at the Camp? Does the Camp work all year round? This series has so much potential!