REVIEW - CAUGHT IN THE CROSSFIRE - THE CLOVEN PACK BY D. FISCHER 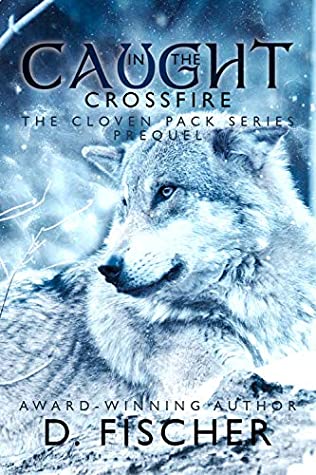 BLURB from Goodreads
The weather will change as she pleases. She can choose to be serene or destructive. If she chooses destruction, everything you loved, dreamed, and fought for will be lost in her wake. She has no depth of boundaries. No quarrel of states. No prejudices of those undeserving. She can make or break you. Survive or perish. Only then will you know if you’re strong enough to weather her storm.

REVIEW
Having read the Howl For The Damned Series and loving it, I wanted to check out more books by the author D. Fischer. Also upon researching the authors other books I realised that characters featured in the Howl For The Damned Series are also in The Cloven Pack Series and the Rise Of The Realms Series. All the series are set within the same world, and this fact made me take the plunge and read this prequel novella to The Clove Pack Series. It is a short novella but it actually covers an important incident which explains how Evo became the Cloven Pack Alpha.

At the beginning of the novella the Alpha of the Cloven Pack is a man called Craig Johnson. Craig is a hard, sadistic, unrelenting leader. It seems he wants the Cloven Pack to be the most undesirable one known. Craig doesn’t care about who has broken his rules, be them reasonable rules or unreasonable ones. Even his own daughter is punished just as harshly as the rest of the pack. Craig used to have a mate, Juna, but she died giving birth to their daughter Brenna. The Alpha also has a son, Evo, who is currently away from the pack, in fact it seems he is no longer in contact with anyone in the pack.

Most Alpha’s rule fairly and only give out punishments if they actually have to, but the fact Craig is so sadistic isn’t the only thing that makes Craig a rarity. The fact his mate, Juna died makes it strange and really rare that Craig is still alive as normally when mated and one half of the pairing dies the other dies shortly after. However, Craig still lives on, unfortunately and seems unbeatable as an Alpha.

Not every one is content to let things continue in the direction that Craig is taking the pack. Kelsey is an outspoken red headed, mouthy bitch and isn’t afraid of speaking her mind. Kelsey hates the way Craig orders everyone around and the pack members just do as he bids without question as they know what they will get if they don’t. Kelsey has recently met her mate and gone through the claiming with him. Her mate, Jeremy is the chalk to Kelsey’s cheese, where she is loud, outspoken and fiery, Jeremy is quieter, more of a thinker. Kelsey hadn’t accepted his interest in her to begin with, attempting to put him off and push him away. It’s when Kelsey is in the kitchen with her mother cooking and kind of bantering with her about “mother nature” doesn’t make male pack members like she used to, when he mother once again warns her that she better not let Craig hear her talking like that. Kelsey and Jeremy as well as other younger members of the pack imagine what life could be like without Craig as Alpha, but who is brave enough and strong enough to take their current Alpha on and beat him. Whoever challenges Craig will have to be very strong and be prepared for a hard battle, one that could end in their death if they lose. Craig is certainly not known for his mercy, both the challenger and anyone who supported them would be classed as an enemy by Craig.

When Evo makes a return to the area he has returned with a mission on his mind. He intends to challenge his father the current Alpha. Its time the Cloven Pack had a change of leader but it won’t be an easy task and even he can’t be sure of the outcome.

This novella felt like a really quick read and is a great introduction to the characters and dynamics of the Cloven Pack. Personally, I think it can be read before the first book or after and it still all makes sense either way. I haven’t read any more of The Cloven Pack Series yet but I intend to and I think this novella will turn out to be a great addition to the series.

To sum up I can’t wait to read more of The Cloven Pack as well as the other titles by D. Fischer. My first genre love was shape-shifters (especially wolves) so I always love discovering a new series, and especially an author that is new to me too.