REVIEW - EXTANT: BEYOND THE THAW - THE THAW CHRONICLES BY TAMAR SLOAN & HEIDI CATHERINE 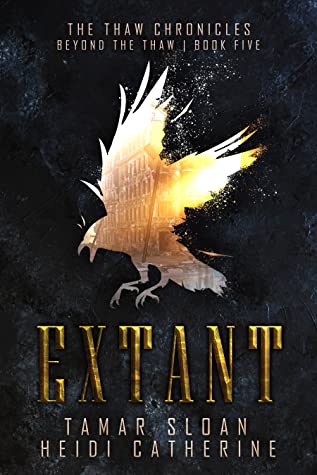 Sea levels have receded, exposing fertile, untouched land. Virgin soil that everyone in a ravaged world is willing to fight for.

Askala knows it needs to stake a claim if they’re going to continue healing the Earth. To do that, a team of Seekers will be sent to colonize it…and assimilate those who don’t understand.

This year, the testing won’t end at the Proving. Passing is no longer just about having a kind heart and a sharp mind. To spread Askala’s word, Seekers also need to survive in this harsh new land. New tests will determine who’s strong and tough enough to be the best of the best.

Sam is determined to prove her father’s vision is what the world needs. Mercy is convinced she’ll be able to win the Outlanders over with her smile. Hawk believes he was destined to be a Seeker, but will his gentle soul be his undoing? Luca knows he’s never fitted in and isn’t about to try.

Who will pass and have the honor of representing Askala? And how will a society founded on peace succeed in a world where violence is power? Four teens are about to find out.

PURCHASE LINKS
Amazon US
Amazon UK
REVIEW
After reading and loving the previous four books set in this world, I knew that Extant was most definitely on my must-read list! So as soon as I knew it was available, I just had to read it!

This cover fits perfectly with the preceding book covers and I bet they look amazing on a bookstore book shelf all together!

In this book we are once again meeting the next generation, so it is the children of Kian & Nova, and Dex & Wren. There is also plenty of offspring for another couple that was hinted at in the last book but I don’t want to give too much away.

The main characters therefore are new to us and are called Hawk, Mercy, Sam and the more familiar name but of the younger generation Luca. The parents, the characters we know and love still feature in this book too. The Proving’s still go on but contain nothing as sinister as losing a finger like they used to do in the past. Now if you fail a Proving you are able to re-enter the following year. The big difference this year that is even a surprise to the present days entrants is that there is to be another, more difficult, more dangerous set of tasks to be done to choose six seekers. These seekers will go out to spread the word of Askala and their ways of respecting the earth and trying to help others to join them in being more eco-friendly. Educating people to such a different way of living is not going to be an easy job.

I really enjoyed reading the personality traits that have been passed onto the next generation, as well as the physical ones of course too. It’s interesting to learn who is going to end up in a relationship with who aswell. There are a few occasions in the book you feel like reaching into the book and grabbing the characters, shaking them and saying how can you not see what he/she feels about you.

The man put in charge of the new tests for the opportunity to become a seeker is Jagger, as always Askalan’s strives to always be fair, and it would not be right for a parent of a youngster to be in charge and there be the slightest possibility of any favouritism. Though to be honest with some of the characters I think they would be more likely to be harder and expect more from their own offspring! Jagger was one of Ronan’s men who changed sides and helped the Askalan’s win the war against them. Jagger has become a valued member of the council that leads Askala. For each test tokens are awarded, but it is up to the individual that earns the tokens as to who they give them to. They can keep them for themselves, or give them to someone else. However, no one knows who is receiving how may tokens as those taking part go to a separate area alone and place their tokens in an urn. There is an urn for every person taking part.

There are quite a few entering for the possibility of becoming a seeker, including a late surprising entrant Luca, who returns from the Outlands just in time. It is his adoptive father that asks him to enter to care for his 2sister” and try to make sure that she doesn’t do well enough to finish in the top six and become a seeker!

When those entering the new “Seeker Proving” were told that these new tests would be more difficult it was no exaggeration, in fact a couple of entrants actually die whilst taking part. The one trial I particularly loved was the stand in a bucket of sea water. There is one bucket less than participants so one is immediately ruled out. Though it is just one person’s ingenuity that helps all the others taking part. As I said there are also a couple of deaths during the tasks too, which of course are sad. Also like the real world we all live in always there are those that would prefer to cheat and steal from others rather than do their own work.

There are also the love interests and the ups and downs of budding romances and relationships. When Luca returns to Askala, he is shocked by how someone he previously thought of as a relative now provokes totally different feelings within him. At first, he tries to fight it, but can he resist his feeling when the young woman in questions makes it crystal clear she is interested in him too?

There’s another couple who have been best of friends growing up but now have romantic feelings. Each of them have feelings for the other and cannot bear it if they end up being parted with one making it as a seeker and the other one not. I really adored following this couples journey throughout the book.

Once again, I enjoyed this book from the beginning to end! The only difficulty I had was actually putting the book down to go to sleep. I truly hated having to put it down. I started reading quite late one night so I did know I wouldn’t be able to read it in one go, but it didn’t stop me wanting to continue reading it very late into the night!! One of the chapters ends with a character making the difficult decision of where they are putting their token. Should they vote for themselves? Help someone is maybe not so good at tasks but really wants to be a seeker. Should they vote tactically? Who would they want to represent Askala? Who can do the job they need to do? If they become a seeker who would they want on their team? There’s lots and lots to think about and quite a few of the characters struggle with who to give their tokens to. So, as I was saying, in this certain chapter, one of the contestants in the trials is having difficulty deciding where to put their token and just as you think its going to be revealed which urn the token goes in that chapter ends!!!

My immediate thoughts upon finishing reading the book were, Oh...wow....I did not see that result coming....wow....amazing! Seriously looking forward to reading more of this series.

To sum up, I am seriously loving this whole series and really pleased to learn there are going to even more books still to come.