REVIEW - FROM THE GRAVE - MACKENZIE GRAY: TRIALS BY KARINA ESPINOSA

Mackenzie spent the last three years learning who she was in Origins. Now she will face her greatest challenges in Trials ...... 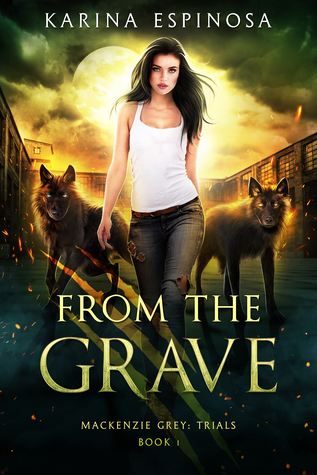 BLURB from Goodreads
Secrets don’t stay buried forever. Mackenzie Grey is a lone wolf who’s earned her fair share of battle scars from the past, but that’s all over now. Or so she thought.
Known as the Freedom Princess, her heroic deeds have come with a heavy price when a mysterious new villain emerges, one who’s intent on killing Sebastian. As a new breed of danger lurks on the horizon, secrets between Bash and Kenz pile up and her worst nightmare is realized.

REVIEW
I felt a mixture of joy and disappointment as I finished reading the last book in the Mackenzie Grey Origins series. The ending was ... well it was wow! I loved the Origins series from the first book to the last page of the last book but it didn't stop me being disappointed that there was to be no more. Then when I heard that Karina Espinosa had more plans for Mackenzie Grey and she was coming back within another series called the Mackenzie Grey Trials I knew it was going straight on the top of my "Must read" list! In fact I didn't take the chance of missing it I actually pre-ordered it so that as soon as it was available it would immediately download to my kindle app to read! The other obvious reason I had mixed emotions was, the question of would this series be as good as the Origins one....read some more of my review to find out!

I really like the cover of this book as it could well be a photograph of the area where the Brooklyn Pack are situated. It's a great representation of the description of warehousing described in the book. The central part of the cover is of course the female figure which is Mackenzie confidently striding forward, her hair loose in the wind wearing a white vest top and her jeans with holes in them. Behind Mackenzie’s head there is the full moon which of course is an important feature within the book which affects wolves. There are also the two wolves at either side of Mackenzie, I'd say they are Bash and Jackson.

In this book everyone is trying to recover from the selfless act Jonah made at the end of the Origins series. Mackenzie & Sebastian are finally officially in a relationship, and it is commonly known that Sebastian/Bash is the true soul mate or “Anam Aonachid” of Mackenzie/Kenz who is now known as the freedom Princess. The still fairly fledgling relationship between Kenz & Bash is still struggling somewhat with the both of them keeping secrets from the other. Keeping these secrets create more secrets which turn into lies and more lies. I found myself sat on the edge of my seat waiting for one of them to discover the others secrets and lies!
The “Anam Aonachid” element of the book is a double-edged sword really as yes Kenz and Bash are deeply in love and meant to be together. Together they are also a formidable team. However if one of them dies the other will slowly go mad and die too, their bond is so strong and reliant on the other.

There were so many other plot lines within this book, one of the larger ones is the fact someone seems to be killing off pack Apha’s. Then there’s still Amy and her dilemma of whether to take the cure for vampirism and become mortal and human again. Though I would say it’s probably the most sensible thing to do with the dangerous kind of situations her and her friends keep finding themselves in.

As with the Origins series there is so much going on in this first book of the new Mackenzie series. There is so much potential for this new series too. There are all the different supernatural being’s that can be part of the series along with the different scenarios that the SIU can come up with for Mackenzie and the taskforce to have to deal with different law breakers. Then there is all the family interaction we can expect. Kenz has avoided visiting her adoptive parents and brother for as long as she can and in this book we see that the big tough Alpha of the Brooklyn Pack, Sebastian and his kick butt Freedom Princess, Mackenzie are in awe and actually nervous of visiting with Mackenzie’s human family. Mackenzie has kept her human family as far away as possible from her other life. They are still under the impression that Mackenzie works for a "normal" Police Force. There are some really funny scenes around the dinner table. Then of course Mackenzie calls on her brother Oliver Grey to help out within one of her investigations.

There are the usual fixes and problems that Kenz gets herself into using dark magic sources to trace fugitives or help those she loves. At some point Kenz will have to repay all her black-market favours. Lets hope they don't cost her more than she would wish to pay or cause her anymore problems.

Naming favourite characters is difficult because I like so many of them so
of course, there’s the usual suspects . . . er werewolves, Kenz, Bash, Jonah, and Jackson, along with vampire's Lucian and Amy are all still favourite characters. Even though certain characters are not in this series yet they are mentioned so I am also looking forward to hearing more from them in the future of this series.

I still like the character of Garrett Michaels who is Kenzie’s Police partner in the Special Investigations Unit and I think there is lots and lots of potential for stories around the SIU.

In this book we do learn more about Kenzie's human brother Ollie. A big tough army guy who is prepared to do anything to help out his adopted sister without asking too many questions even if it means putting himself in danger. It would be great if Oliver learnt the truth about the supernatural beings that live in plain sight within the “normal” world. Maybe Ollie could date a supernatural being?

My immediate thoughts upon finishing reading this book were Wow! What a great start to a possibly second fantastic series centred around Mackenzie Grey & Brooklyn Pack.

I could literally go on and on talking and writing this review about From The Grave, Bk 1 of the Trials Series. I have totally avoided explaining the relevance of the book title but once you read the book you will know why! I try not to give away too much story or any major spoilers whilst at the same time letting you all know how much I love the book. What’s left to say other than this one is a must read and the rest of the series is on my want to read wishlist.