REVIEW - BLACK ICE - AFTER THE SHIFT BY GRACE HAMILTON 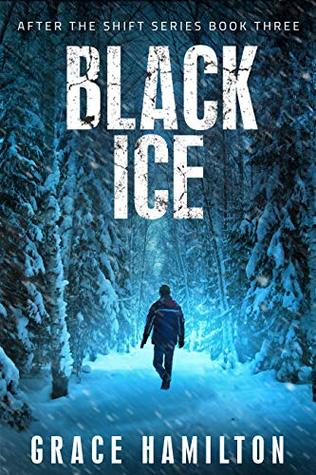 BLURB from Goodreads
Losses pile up like the snowdrifts of a never-ending winter in this post-apocalyptic series conclusion. Nathan Tolley’s wife is gone, leaving him adrift in a vast ocean of bitter white that promises nothing but heartache and despair. Yet, his weary band of travelers continue to look to him to secure their safety. But Nate’s no leader. Every decision he’s made on their dangerous cross-country journey has taken them from bad to worse. First Detroit. Then Chicago. Now, Wyoming, which proves the deadliest of all. As circumstances continue to deteriorate like the weather, Nate turns their sights south, but the past is about to catch up to them in ways none of them will see coming. And in order to embrace an uncertain future, sacrifices must be made. Survival of the fittest gets real—fast. And, this time, it’s personal.

REVIEW
As soon as I heard this one was available to read I knew I had to have it and read it as soon as possible! After the ending of Killing Frost where a major much loved character was killed off I wanted to know how the remaining characters in the group of traveler's would cope. Would their plans have to change? Would the death be the beginnings of the group breaking up? Yep, I had loads of questions I needed answering.

This book cover fits well with the rest of the series with its blue tones and icy imagery that makes you feel cold and shivery looking at it. These covers really do set the scene described within the books really well. I wanted to know who was the lonely figure on the book cover and why they were alone. To be honest this cover could fit several scenes described within the book with quite a few character possibilities for the lonely figure. I think the cover fits the whole “climate change” themes within the book too. Black Ice fits well into the post-apocalyptic genre, with what some could say has futuristic elements, so dystopian and Sci-Fi genre too.

I loved the fact there was a small re-cap chapter at the beginning of the book and then, . . well then, we were straight back into the drama filled, action packed plot. The group go through more and more hazardous situations from a town they were hoping to settle in arguing amongst themselves so the group gives that town a miss. They also come into contact with another weirdo who wants to pull them into his cult. It seems just when things improve for the group they are hit with another dangerous situation. They almost consider staying in Denver as there are FEMA officers there, then when they are forced to ask for access to the hospital, they find out that Denver is even more lawless than other places they have left. It seems that everyone is just out for themselves even more. There are two rival gangs fighting each other and setting up tolls to stop any newcomers and past them from their valuables. Even more worrying is the fact when Nathan tries to catch up with Tommy etc he decides it best to approach the FEMA army toll, preparing to give up a few weapons and maybe ammo but he is told that isn’t nearly enough. Nathan has to turn away from the toll and think about a way to break in or buy their way in and out.
It is whilst the group are finding each other and trying to escape that an awful character from their past shows up! One question I was asking myself throughout the whole book, even at the end was Can Nathan and his friends ever truly evade Brant and his bully boys or will there be one last battle?
I found the herbal remedies that came from the handwritten book entrusted to them interesting especially the fact Lucy seems to have appointed herself the keeper of the book and herbs.

Even as the characters are dealing with the hazards of this new world, I still enjoyed reading the incidents and sections that covered the normal growing up of Tony Tolley. He first becomes a more confident boy who looks after his baby brother and has a malamute dog as a friend. Then as time goes on, he shows he has a “good head on his shoulders” remaining calm in situations grown men and women would not cope with. At one point in the book Tony proves he is a valuable part of the group when he tips the odds back into favouring the group and turns a deadly situation around.
I thought Syd was a great kick butt, mature, savvy and sassy female character who has a knack of acting older than her actual age. Though Syd returns to the survivors group and re-integrates well, she still has her mysterious, quieter, private side and the strong possibility of keeping secrets. Syd is a good friend to Tony and seems to have a way with words and a knack to know when Nathan needs her around.
To say I was not keen on Tommy is an understatement. Even though he had previously helped Cyndi rescue Nathan. In this book he seemed somewhat cantankerous, moody and wanting to continually take the opposite view than the majority of the group. He really didn't like Lucy making any future plans for the group or even her expressing her opinion at all. I can understand him wanting his say and obviously he always has the option of going his own way, no one is forcing him to stay with the group. He irritated me so much in this book at times I felt I wanted to violently shake him by the shoulders and tell him to get over himself!
I found the addition of the new character of Arctic, who turns out to be an ace sniper interesting and maybe if there is more to come from this series, she will feature in it more.

My immediate thoughts upon finishing this book were, that I really appreciated the initial little catch up at the very start of the book. Then we were launched straight back into the drama and the Post-Apocalyptic setting within the no government, no law world. Black Ice introduced more new characters as well as having some old ones return to the group. Will there be a book four? Yet at the same time I was wondering what else could happen to Nathan and his friends?

My final thoughts are that this series could now have come to its completion with how this book concludes. Having said that I would eagerly read another in this series and I definitely intend to read more books by this author, both in the series I have already started and anything new by Grace Hamilton. There was possibly a hint when Nathan says he is happy where he is at the moment but maybe things will change in the future. I’ll be keeping my eyes and ears open for more!