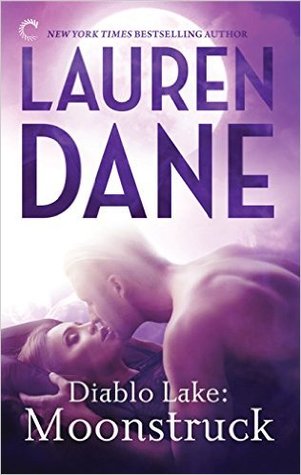 BLURB from Goodreads
In Diablo Lake, Washington, a town populated by werewolves, witches, and more, magic woven deep into the earth protects the town's secrets from outsiders.Katie Grady left Diablo Lake to get over a humiliating breakup; but her family needs her help, so she's back, in a sublet right across the hall from the guy she's lusted after for years. Jace Dooley is hotter than ever, and their friendship picks up along with massive doses of grown-up chemistry.The very scent of Katie sharpens Jace's canines, makes the wolf within him stir. There's nothing more alluring to a Pack Alpha than a sexy female who is so very in charge. She won't be coddled, but if he plays his hand just right she might be convinced to become his.Katie presents a challenge to Jace's wolf nature, whose chief instinct is to protect. Especially now that she's coming into the magic that is her birthright - and suddenly Jace isn't the only one who's interested in Katie, or the raw power she's just learning to use.

REVIEW
I recently decided to revisit a genre I have loved for a long time, I guess some would refer to it as paranormal though to narrow that genre down to be even more specific I'd describe it as "shifters".  I originally discovered another title by Lauren Dane via Netgalley, and have since explored her other book title listings on Goodreads.

I love the purple hue to the cover of this book, really giving the impression of being under the moonlight. The couple on the front I'd say have to be Jace Dooley and Katie Faith Grady. Would the cover affect my purchasing the book. . . that's a difficult one, I think it would depend what shelf this book was sitting on. Some people on Goodreads have categorised this books genre as erotica. A book being classed as erotica tends to put me off, but having read other titles by this author I decided to go ahead and give this one a go, as I have found the other titles I've read more steamy than what I personally class as erotica and don't read. I'm really glad I did, and I would say it is a paranormal romance with some steamy scenes that are relevant to the plot and well within what you would expect of the characters involved. I think this book has a little something for most paranormal readers, there's the werewolves, cat shifters, and various different types of witches.

The main character of this book is Katie Faith Grady, who left her home in Diablo Lake when she was quite literally left at the altar by Darrell Pembry! Naturally she left town rather upset but her father Avery Grady is ill and her mother Nadine Grady needs her help in looking after Avery and their diner business called "The Counter". Of course Kaite Faith rushes home to help, holding her head high and willing to face all the gossips and whatever they will have to say about her. For Katie Faith her family come first before petty gossips and snide remarks from the Pembry family.

Diablo Lake is an isolated area, that is steeped in both tradition and magic. Those that live in Diablo Lake are paranormal, so werewolves, cat shifters, and witches are the residents.
Katie Faith initially stays over at her best friend, Aimee Benton's home, but soon realise her return to Diablo Lake is going to be a longer stay, if not permanent move. So she decides to take a look at properties available to rent. She approaches local part time realtor Damon Dooley, whose family have a few rental available, in fact one is above the mercantile they own. There's more than one reason Katie Faith shouldn't move into the vacancy apartment above the mercantile, one, it's straight across the hallway from the long not so secret crush of hers Jace Dooley and two, living in a Dooley property puts her in the middle of the shifter war that seems to be brewing. When Katie Faith see's the property, it's everything she wants and more so she decides to throw caution to the wind and move in. Lets face it, living across the hall from a hunky werewolf is not going to be an ordeal!

An altercation on the street shows that Katie Faith Grady is a strong witch who will play an important part in Diablo Lake's future. This makes her a valuable asset to have as part of any family or pack.  Katie Faith doesn't want to be anyone's asset, or to be wanted for her magic abilities. . . so she knows who is being genuine around her, and who wants to merely use her for their own betterment. The quiet Katie Faith Grady that left town after being badly let down in the worst possible way on her wedding day has gone. The Katie Faith Grady that returned to Diablo Lake is stronger both in character and magic. Katie will not hide away, as if she did something wrong when the fault was with the other party! She is also determined not to be pushed around or used as a pawn in a larger game between werewolf packs and she isn't afraid of saying her mind/piece anymore!

A relationship between Jace and Katie soon begins, which has the Pembry's shouting from the rooftops that Katie is taking sides. What the Pembrys fail to see is that the Witches are people in their own right too. Though the usually quieter, placid witches are sick and tired of being looked over and taken for granted. Miz Rose has decided its time the witches showed everyone what an important part they are of Diablo Lake and its secrets. When push quite literally goes to shove Katie Faith will have the Diablo Lake Witches as well as the Dooley Werewolves standing by her.

Of course I love the main character of Katie Faith Grady, she may not be a werewolf but she can kick butt as good as any werewolf, male or female! I became quite fond of Jace Dooley . . . in fact all the Dooley men come across really well rather lovable. Adopted and then brought up by their grandparents, JJ & Patti Dooley as their mother died in childbirth and their father, Josiah, did something so bad he was removed from the pack, struck from the historical records and it was ordered he not mentioned of again. It's when Scarlett Pembry uses her recollections of the past to try and push a wedge between Katie and Jace, that she is not only being openly vindictive, she is also breaking pack lore. Sadly head of the Pembry pack, Scarlett's husband Dwayne seems to have neither the notion or power to reign his wife back into line. Which is when his eldest son Macrae Pembry is sent for, he needs to return to Diablo Lake to sort out the mess created by his mother Scarlett, brother Darrell and get the Pembry pack back under control, which his father Dwayne seems incapable of doing.
I really enjoy the histories, cultures and traditions of the different races. The way all the supernaturals and their elements of magic affect each other and how they need to work together to ensure the balance remains in Diablo Lake. I was found the descriptions of the different types of witches captivating too.
I found the older characters in the book enchanting too. Miz Rose the "head witch" in Diablo Lake as well as Avery & Nadine Grady and JJ and Patti Dooley all captured my heart with their stories of the past and subtle encouragement for the relationship between Katie and Jace. The way the older generation of Diablo Lake sort of turn a "blind eye" pretending not to notice things are happening until Katie and Jace are ready to "go official" with their feelings and relationship.

This book and its characters pull you right into the heart of Diablo Lake and then hold you there until the last words on the page. I certainly finished reading this one thinking, "Wow when can I read more?" I absolutely intend to start reading the next book in this fantastic series right away!
I can safely say I have found another author in Lauren Dane whose books I feel an instant pull to read. I would certainly add Lauren's name to my "must read author list"for shifter books, along with Kelley Armstrong, Amanda Carlson, Karina Espinosa, and J.A. Belfield.