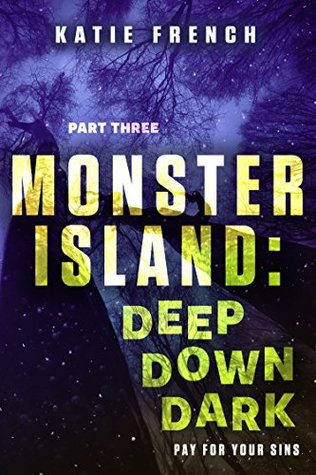 BLURB from Goodreads
My name is Lucca DiVitas. A few other teens and I have been trapped on an island full of blood-thirsty monsters. But when we try to escape, every door we open creates more questions than answers. Why is someone planning our deaths, watching from cameras like a sadistic voyeur? Why would someone dangle a twelve-year-old girl from a tree like bait? And what does my own father have to do with this?

REVIEW
I was certainly looking forward to reading more of this series. I had lots of questions from both the prior books in the series. Hopefully I will get some answers or hints at answers in this book! Though why do I feel I may be asking as many questions I get answered. . .lol.
I didn't really take notes as I was reading this, Being familiar with the characters and the fact that this is a series is presented as a number of short stories I basically didn't want to put the book down! I felt like I was racing along side the characters, desperate to learn about where they were and why they were there as well as the big question of who has brought the here to Monster Island.

The cover again is kept simplistic, and fits in well with the other covers. The same byline of "Pay For Your Sins" is again featured on the cover. I'd certainly say this series falls into the genres of thriller, suspense, and I would even say it has a horror element to it.

This book picks right up where the previous one, The Noose, ended. Lucca and Kat are still united and determined to find 12 year old Joslyn. They are struggling, moving through the snow and extremely cold conditions in their frantic attempt to get to Joslyn before the sadistic kidnapper lowers her to the floor and amongst the awful beast that seem native to this horrific Island of terrors!
Later in the book Kat and Lucca are almost herded to a church by the monster-beasts. In fact they are so afraid they make the terrible mistake of engaging a combination lock to keep out the monsters, which it does but they then soon realise in their hurry to escape they have in fact trapped themselves!
Still Kat and Lucca push on together, unified in their bid to find out the answers to the increasing amount of questions they have.It's then they make a discovery which shatters their friendship. . . I won't say what they discover . .but I felt so sorry for Lucca, who to be honest is as dumbfounded by their discovery as Kat is. Lucca attempts to explain but Kat see's something on one of the video camera feeds that looks like her sister and she dashes off into the wintery landscape alone to rescue her sister.

The character that became my favourite in this book was Kat. You are given more insight into her home life prior to her being kidnapped. Kat is naturally protective over her twelve year old sister Joslyn. Kat and Joslyn live with their Nana, their parents went off for a three week excursion, but never returned. . they have been gone eight months!
I really loved the astrological desriptions revealed in a scene between Kat, Jos and their Nana before they were taken. Kat is a cancerian, which means though she can be moody and emotional, she is also very caring and is usually the one to fix things. Where as Joslyn is a scorpion, known to be hot headed and having a temper.
I also identified with the solution and action Kat takes against a boy who has been bullying Joslyn, she certainly teaches him a lesson, though she also gives herself a rather nasty scare in the process. Kat comes across as really brave and in control the way Kat is prepared to face anything from a twelve year old boy who is bullying her sister to a large squid, monster wolf/bears and the sadistic people who have kidnapped them and placed them on this island of horrors! She would do anything for her younger sister.

I think I learnt much more about Kat's character in this book. Some of my questions were partly answered but I still have a few of the same questions I had after reading Taken, and then The Noose. I cannot imagine why someone, or some organisation maybe would want to put young teens on such an isolated island full of monster-beasts and sadistic individuals!
I am eagerly awaiting the next part of the series! I want to know more. . .more about the island and maybe some more about the characters "before" they were taken too. It's very clever how Katie is having the character flashing back in time presenting reasons for why they may deserve to be punished on this odd, macabre island.

Upon finishing reading the book I like to make a quick note of my feelings/reaction. The final thoughts I had as I came to the end of Deep Down Dark were "Well I didn't expect that! or 'him' to be part of it all!"