BOOK BLAST - DYING TO BE BEAUTIFUL BY M. GLENDA ROSEN

Today's Book Blast is to celebrate the fact that these books are just 99c right now! 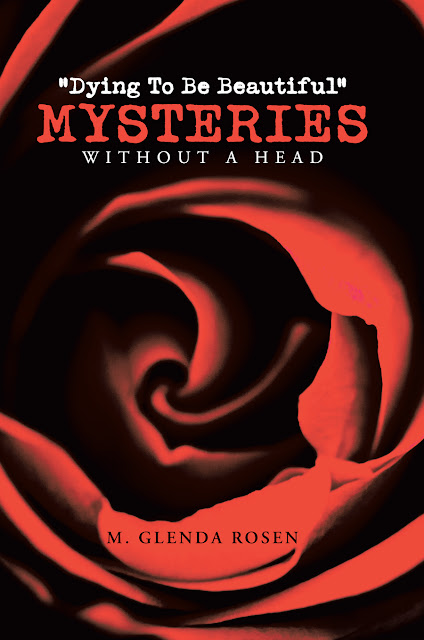 BLURB supplied by Tribute Books
Saturday Morning, 6:00amThe head in the sink stared up at her. Darcy Monroe, the owner of a popular, chic hair salon was used to this. Only this time, the head was there without a body.Chapter One: The MurderAs a Private Investigator, Jenna Preston had been hired to help solve murders, insurance fraud, cheating spouses and more. This was a new one for her.She received what could only be described as a hysterical call from Darcy Monroe, owner of a popular, upscale hair salon in The Hamptons. A head without its body was rolling around in one of her shampoo basins.Almost five-feet, five-inches tall, always looking taller in her two- or three-inch heels, Jenna had long red hair, blue eyes and was often seen driving around the East End in a white jeep, and in recent years, with her Irish setter sitting next to her.

As a Private Investigator, Jenna Preston had been hired to help solve murders, insurance fraud, cheating spouses and more. This was a new one for her.
She received what could only be described as a hysterical call from Darcy Monroe, owner of a popular, upscale hair salon in The Hamptons.
A head without its body was rolling around in one of her shampoo basins.
Almost five-feet, five-inches tall, always looking taller in her two or three-inch heels, Jenna had long red hair, blue eyes and was often seen driving around the East End in a white jeep, and in recent years, with her Irish Setter sitting next to her.
As a well-respected private investigator in the area, she told the salon owner, “I’ll be right there, and don’t touch anything until the police arrive.”
Jenna knew they needed to secure the business as a crime scene and Coroner Doc Bishop and Head of Forensics Lara Stern had to be brought in as well.
“Troy, someone left a head, without the body, in a shampoo bowl at Darcy’s Salon. I’ll be there in about ten minutes.”
”Damn it, Jenna, I nearly spilled my coffee listening to this bizarre message. I’ll be there within the half hour. Meantime, I’ll ask Lara to get over there to check the crime scene for prints and other possible evidence and for Doc to arrange to bring the head to the morgue. We’ll want to look at it there, after he’s had a chance to determine how it was cut off and anything else he might find.”
Detective Johnson hung up.
He and Jenna had worked together and known each other for a long time. They clearly trusted each other. He knew she would follow police protocol at the crime scene.
Saturday, as always was an exceptionally busy day, “in season” at Darcy’s Salon, which is why she had gotten there so early. She always wanted the salon looking perfect, ready for stylists and clients, who this day had appointments beginning at 7 am.
Located off the main avenue of this posh resort at the East End of Long Island, less than ninety miles from Manhattan, the salon was known for catering to the rich and famous, as well as some of wanna-be customers, primping for weekend parties and fundraising events.
The salon was truly beautiful with warm color tones and soft matching leather client chairs facing gold (well, fake gold), trimmed mirrors. There was a reception area with the latest issues of fashion magazines from Paris and Rome, and a few of the more popular Hampton rags, like Dan’s Papers were spread out on a marble table, next to it a coffee machine offering gourmet flavored coffee and teas.
Most of the women who came to Darcy’s Salon had plenty of money, some from their own success, although others were arm candy for much older, wealthy men. Sometimes one of them would joke (maybe not) that they were “Dying To Be Beautiful” like some of the famous models and celebrities, many of who summered in the Hamptons.
“Jenna, you’ve seen how difficult and fussy they can be, and their egos—they’re constantly seeking confirmation of how beautiful they look. They want to come to a high-end salon, expecting to be treated like royalty. And believe me, we do.”
Darcy Monroe was only too glad to charge megabucks for her services since it included a whole lot of catering to their whims and demands. Beauty could indeed be expensive in The Hamptons. The chatter amongst the clients, the eight hair stylists, three manicurists and several assistants meant gossip was a basic ingredient of conversation. The story about the body without a head, and the head found in the salon, was sure to explode through The Hamptons. It certainly had all the elements of a soap opera.
“My god, Jenna, the gossip about this mess is going to be like a volcano spilling over this town.” 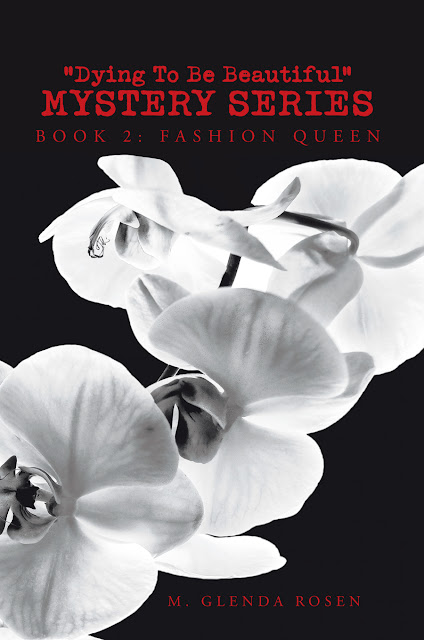 BLURB supplied by Tribute Books
Monday, 6:45amKevin Larson swam in his pool nearly every morning. Going on sixty-five, he prided himself on being in good shape.Walking toward the small pool house, off to the left of the pool, he noticed a light was on. He was certain he turned it off the night before. Strange, he thought.Even stranger, lying in a different sort of pool—blood—was his long time friend and lover, fashion designer Andre Yellen. Yellen was stuffed into one of the gowns he had designed and a wearing a blond wig.The gown had been auctioned off the night before at a huge Hamptons fundraiser.People in the Hamptons were certainly dying to be beautiful

Detective Troy Johnson was at Larson’s house when Jenna arrived. He had covered the victim with a large beach towel until the coroner and forensics arrived. [deleted “He and”] Sergeant Stan Miller, who had taken the call, accompanied him and was presently attempting to hold back the media. They had heard about Yellen’s death on the police scanner, and in no time, the active crime scene was quite a wild sight.
It was 6:30 A.M. when she had received the call from Johnson that he was on his way to Kevin Larson’s house: “Jenna, there’s been a murder. Designer Andre Yellen, the Fashion Queen, was found dead this morning at the home of movie mogul Kevin Larson. He gave her the address and exactly where it was located, “past the windmill at the edge of Southampton.”
“More like the situation was at the edge of reason,” Jenna thought.
“Jenna, they’re acting like a bunch of hungry vultures. Help! These are your people. Well, they’re reporters like you used to be. The homeowner is either in shock or just completely uncooperative except for telling me where and when he found Yellen’s body.”
Jenna sighed, “Sure, I can’t say no to such a lovely invitation.”
The death of Andre Yellen was big news.
Andre Yellen was squeezed—really, truly squeezed—into a beautiful ocean blue, sleeveless, silk gown he had designed and donated for a fundraiser the evening before. The size-8 dress was torn at all the seams. Yellen, in his early fifties, 5’9” and clearly out of shape, was more like a size-18-plus, and stuffed into a dress way, way too small for him.
As a designer for major celebrities for nearly twenty-five years, Yellen was a man about town who loved both the ladies and the men, or so it had been gossiped around the East End of Long Island, also known as The Hamptons.
After all, this is THE HAMPTONS, and all sorts of lifestyles are accepted, where choices are supposedly not judged, and relationships are not restricted by conventional boundaries. Unfortunately, there are always those determined to exercise their own brand of severe judgment.
However, there was no evidence this murder had anything to do with narrow minds. Not yet, anyhow. In fact, it wasn’t clear at all what this murder was about—or who had committed it.
Private Investigator Jenna Preston was familiar with many celebrities who lived or vacationed on the East End. Before becoming an investigative reporter, she was entertainment and social events reporter for the local daily paper and had interviewed quite a few of the “anointed” as she had once called them. Gossip columnists covered the rest.
Jenna was regularly hired by law firms, insurance companies and businesses for corporate fraud issues. She also had an arrangement and relationship with the local police—especially when it came to murder investigations. Some of the people she had once written about also tried to hire her for personal investigations and for, what she considered, ridiculous reasons. Such complaints included some new fence being too high or people walking on the beach in front of someone’s home.
Most of these cases she didn’t accept.
“For me, it’s about justice. We all have reasons, even life experiences motivating our passions. I have mine for what I do,” Jenna told a local reporter whose paper was doing a story on crime in The Hamptons.
Jenna had a solid reputation for being smart, resourceful and most definitely charming—without an attitude—which was different from many of the people who summered in The Hamptons.
She did love nice clothes, including the red shoes or red boots she almost always wore.
“Hey,” she laughed once when Troy made fun of her red shoes, “you wear a cowboy hat most of the time, so don’t make fun of me, Tex.”
Jenna and Troy worked together professionally almost as soon as she had become a licensed private detective. It was a small police force, often stretched thin during the summer season. Because they actually had few experienced investigators, he had requested and been given approval by his captain to use a discretionary fund to hire Jenna on an as-needed basis. She was often a member of his investigative team, usually for murders.
Lately, there didn’t seem to be any shortage of them.
Slender and almost 5’5,” yet always looking taller in her two- or three-inch heels, Jenna had long red hair, sometimes pulled back in a ponytail when she was working. She also had deep blue eyes. With more than a hint of spunk and mischief about her, she was definitely considered attractive.
Jenna’s new romance, Dave, thought so! 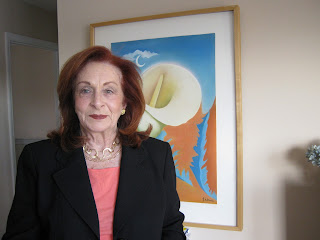 M. Glenda Rosen is the author of The Woman’s Business Therapist: Eliminate the MindBlocks and RoadBlocks to Success, and award-winning My Memoir Workbook. For over fifteen years, she helped numerous authors develop and market their books, and presented writing programs in New York, The Hamptons, New Mexico and Carmel, California, on “Encouraging and Supporting the Writer Within You!” She's the founder and owner of a successful marketing and public relations agency for twenty-five years.


Dying to Be Beautiful Book 1 Goodreads


Dying to Be Beautiful Book 2 Goodreads


Dying to Be Beautiful tour site