BOOK PROMOTION - FEMALE, IS AVAILABLE FOR RENT (AS A TRANSCON HOSTESS) - TRANZCON BY DAVID HULETT WILSON 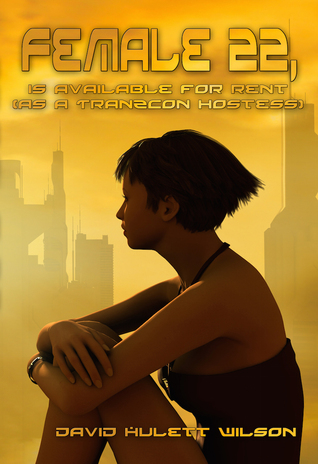 BLURB from Goodreads
Jon Chandler is rich. Very rich. Born into a wealthy banking family he upgraded his silver spoon first to gold, then to platinum. With money no longer an issue or an interest he put his business ventures on hold to pursue a career in politics - and he's going all the way to the top. But Jon has a problem, since the TranzCon service was launched his rare Delta 2 mind-type has made him a mental leper. Compatible hosts are few and far between and when the host of his choice is killed in a bizarre ritual murder the only alternative is unsuitable in so many ways - but what choice does he have? It's only for a few days and after all, what could possibly go wrong? Jana Kell is small, pretty and penniless. When she discovers she's a member of a rare mind-type group she knows there's big money to be made from working as a host for TranzCon travellers.

FEMALE 22,
is available for rent (as a TranzCon hostess)

TranzCon.  Travel by the transfer of consciousness.  This is a mind transfer service which enables the rich and powerful to travel instantaneously across the galaxy to worlds so remote that travel by star-liner would take years.  The traveller rents a host on the target world and transfers into their body for a period of up to 20 days (complications can set in if the transfer is for longer).

Mind Types.  It was discovered in the early days of mind transference that the members of the human race are split into a number of different and mostly incompatible mind-types.  The numerous Alphas can always find an Alpha host at their destination.  Betas are smaller in number but they still run into billions.  Gammas are counted in billions but unfortunately most of them live on a single planet.  Then come the Deltas.  The more numerous Delta1 sub-group has members counted in thousands.  Jon Chandler is a Delta2: by modern standards he’s a mental leper.

The Story.  When Jon is called upon to represent the Union’s First Minister at the accession conference on distant Phoenix he has no option other than to travel by TranzCon.  But he has a problem, with his rare mind type it’s difficult to find hosts, especially at short notice.  Difficult but not impossible.  When the eminently suitable candidate the company selected for him is killed in a bizarre ritual murder he’s desperate to find another.  But who?  Time is running out and Jon’s political career hangs in the balance.  Just when all seems to be lost a new host turns up, Miss Jana Kell (aged 22).  Jon is horrified at the thought of swapping bodies with a female, but he knows that unless makes a success of this mission he’ll be clearing his desk next morning.  Anyway, it’s only until the weekend, and what could possibly go wrong?
But things do go wrong.  The beam which carries interstellar communications fails leaving Jon’s mind stranded on Phoenix in Jana’s body.  After a week there’s still hope it will be back on line any day soon.  As weeks turn into months the hopes Jon once had begin to fade.
With a vindictive policeman chasing the temporary occupant of the body for a crime his host committed Jon is in a fix.  One outcome is he’ll be sent to jail for years, the other is he’ll be locked up in the secure wing of a mental hospital, possibly for the rest of his host body’s life.  In desperation he stows away on the Hyperion, a star-liner once owned by the shipping company he set up over 30 years ago.  If he can get to the planet Darius he’ll be able to TranzCon home from there and resume his high-flying career.

But even after two long years in space things still don’t turn out as Jon had hoped.  The news he receives is devastating.  And at that stage there’s still another 100 pages to go and I don’t want to spoil the rest of the story for you.

Is Female 22 An Excuse For An Intergalactic Sex Romp?  Definitely no!  The book has a strong transgender element and I most certainly could have written it as a sex romp.  But that was never my intention.  Without doubt there is sex in the book, both straight and lesbian, but the number of pages given over to these activities is no more than a handful.  Instead the book tells a story that is exciting and thought provoking with many unexpected twists and turns as the beleaguered Jon battles to regain his freedom.