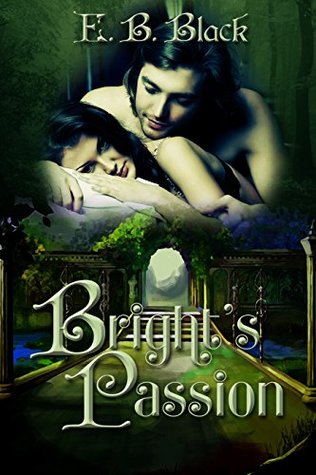 BLURB from Goodreads
Bright wishes he wasn't the god of the suns. Every day is the same: he makes the suns rise and then they set. He looks down at humanity's corruption. He watches wars, people starving, and thieves stealing. He can't help. Every time he tries, the humans take something from him. They've destroyed his family and he has no doubt that they'd like to destroy him, too. Adonya is a raven-haired witch with powers that make her as close to a goddess as a human can be. He's wondered what it was like to be with a woman, but all the goddesses are dead. He can feel it when he touches her—she's as dangerous as all the rest of the humans. Can the power of love join their races together? Or will one of them wind up dead in the end? 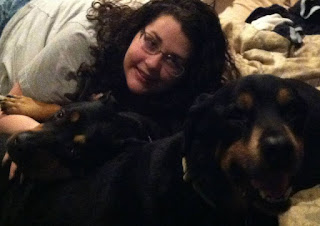 E.B. Black is the annoying author who lives in the head of a nerdy housewife named Elizabeth. Elizabeth tries to live out her days by walking her dog, spending time with her husband, doing housework, and watching television, but E.B. Black makes her drop everything to type out weird fantasy stories. Elizabeth is asking anyone who read this to please send help.

AUTHOR INTERVIEW
What is the name of your latest book, and if you had to summarise it in less than 20 words what would you say?
My latest book is called “Bright’s Passion.” It’s the first book in the “God Of Light Series.” A summary of the whole series in 20 words or less would be: The god of the sun and the god of the moon fall in love with a human witch.

Which of your books were easier/harder to write than the others?
These latest two books, “Bright’s Passion” and “Night’s Lust” were some of the hardest for me to write. It took me three years of writing and rewriting every day. I went through so many critique partners I lost count and completely rewrote both novels from scratch twice.
There was so much I was learning through the experience and that’s why it took me so long.

Do you have plans for a new book? Is this book part of a series?
The second book in the “God Of Light” series, “Night’s Lust” is already out. I’m working on the third book in the series right now, which is called “Star’s Heat.”

What genre would you place your books into?
The ones that are published are fantasy romance, but I also write paranormal and science fiction. I’ve experimented some with horror short stories.

What made you decide to write that genre of book?
I was just drawn to it. I’ve read romance novels all my life and my inner child loves the magic of discovering new worlds through fantasy and science fiction.

How long have you been writing? Who or what inspired you to write?
I started writing seriously about ten years ago. I had a professor and he told me that entertainment was so important these days. We aren’t like the ancient Greeks anymore who would debate in their agoras over philosophy and morality. Now we battle over these things through entertainment. That’s why people are always fighting over what should and shouldn’t be allowed in entertainment. A lot of our huge social issues: racism, religion, and sexuality are discussed in entertainment. We make jokes about them. We write stories about them. We deal with them through entertainment.
This doesn’t mean it’s bad to write about immoral things or people we disagree with. It’s important to point out those things, discuss them, and think about them.
People can relate to you better and the things you are trying to say if you tell them a story rather than speak to them directly. If you talk, people will hear you. But if you tell them a story, people will actually feel what you are trying to say through your characters’ experiences.

Do you have a certain routine for writing?
I get on my bed with a bunch of water and my laptop. My dog usually curls up next to me and I type. I don’t listen to music or anything like that. I prefer no distractions.

Would you ever ask a reviewer to change their review if it was not all positive about your book/books?
Never in a million years. Your opinion is your opinion and I respect that. I’ve received one star reviews and it doesn’t bother me. You can’t get this far without having a thick skin. One star reviews are pretty much nothing compared to how my critique partners and editors mark up my novels before they’re ready for publication. You can’t grow as an author if everyone loves everything you write.

Do you choose a title first, or write the book then choose the title?
Usually I choose the title long after I start writing, but before I finish. This is why, if you looked at my folder where I keep all my rough drafts, you would see a bunch of descriptive names for the stories rather than titles. Things that I’ll understand, but other people might not get.
Like, an upcoming book that I’m working on called “Spirit Speaker” is saved as “necromancystory.doc” on my computer because it’s about necromancers.

What do you do to unwind and relax? Do you have a hobby?
I spend time with my Rottweiler, Izzy. I swear that I can feel her lowering my blood pressure and making me happier every time I hug her. I watch television, read, and play piano. I’ve been playing piano since I was eight years old.

Do you think ebooks will ever totally replace printed books?
No, but I don’t think they need to. Ebooks and printed books have different strengths and weaknesses. It’s nice to be able to have either option when choosing a book to read.

Do you think children at schools these days are encouraged enough to read?
It depends on where they live. When I was a young child, I was in a poor neighborhood. The schools were bad. At 8 years old, I was illiterate. I was fortunate enough to move to a better place and my Mom hired a tutor. I was a natural at English, it turns out. I learned how to read at 4th grade level after only a couple of sessions. But if I hadn’t been able to move and my Mom hadn’t been able to hire a tutor, I would have been without a very basic skill that everyone in our society needs: to read and to write. I don’t know where I would be now. No one in our society should be illiterate, yet a lot of people are.

Did you read a lot at school and write lots of stories or is being a writer something newer in your life?
I was obsessed with reading as soon as I discovered what a romance novel was. I used to read instead of doing my homework and my mother would get angry at me.
I dabbled in writing over the years. When I was a preteen, I had a next door neighbor named Dorothea. She was much older than me, like a grandmother to me. I used to write a fake newsletter with made up stories and word searches. Her husband had just had a stroke (he couldn’t talk or walk anymore) and the three of us used to sit around and Dorothea would read my fake newsletter to the two of us. We would laugh and smile. Dorothea told me that the newsletter helped her connect with her husband because he could still listen to her and laugh, even though he couldn’t talk. She kept every single one, until her death.
I was just an annoying kid passing her a newsletter that she was forced to read every day and she acted like I was the one doing the favor for her. In reality, she was doing a favor to me by encouraging me and my writing.

Do you or would you ever use a pen name?
E.B. Black is a pen name. I chose it because “E” and “B” are the first and last initials of my maiden name. I chose “Black” because I like to write dark stories. My maiden last name was difficult to spell and pronounce, but I wanted to be easy to find. It turned out for the best, since I got married after having my first two books published, but I didn’t have to change my author name.