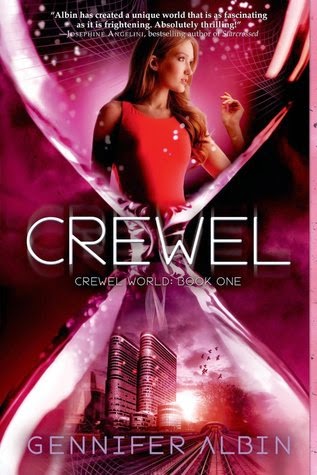 BLURB from Goodreads
Incapable. Awkward. Artless. That's what the other girls whisper behind her back. But sixteen-year-old Adelice Lewys has a secret - she wants to fail. Gifted with the ability to weave time and matter, Adelice is exactly what the Guild is looking for, and in the world of Arras, being chosen as a Spinster is everything a girl could want. It means privilege, power and beauty, the ability to embroider the very fabric of life. It also means entering a world secrets and lethal intrigue.But unlike the others, Adelice isn't interested in controlling what people eat, where they live and how many children they have and will do anything to hide her talent from the Guild. But when she slips up during her final test, her gift is identified. Now she has one hour to eat her mum's overcooked dinner. One hour to listen to her sister's school gossip and laugh at her dad's stupid jokes. One hour to pretend everything is OK. And one hour to escape. Because once you become a Spinster, there's no turning back ...

INITIAL THOUGHTS
So i'm Looking forward to a dystopian. . . . I can't stay away from my favourite genre for long! Not sure what to expect. .  . . I have had this one for a while and then sort of forgotten I had it, and rediscovered it quite recently after reading The Department Of Alterations novella, and being intrigued by the world that novella was set in. So I'm really looking forward to learning more about the dystopian world and the rules and regulations as well as meeting the characters within that world too. Will it be like The Registry Series by Shannon Stoker or The Chemical Garden by Lauren De Stefano? 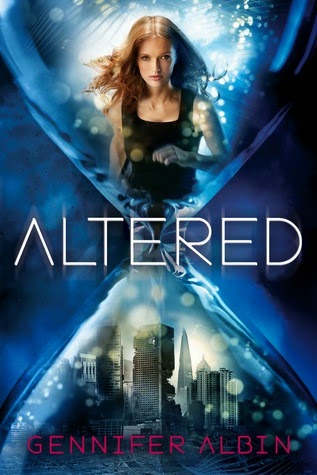 BLURB from Goodreads
Life. Possibility. Choice.All taken from Adelice by the Guild—until she took them back.But amid the splendid ruins of Earth, Adelice discovers how dangerous freedom can be. Hunted by soulless Remnants sent by Cormac Patton and the Guild, Adelice finds a world that’s far from deserted. Although allies are easy to find on Earth, knowing who to trust isn’t. Because everyone has secrets, especially those Adelice loves most. Secrets they would kill to protect. Secrets that will redefine each of them. Torn between two brothers and two worlds, Adelice must choose what to fight for. 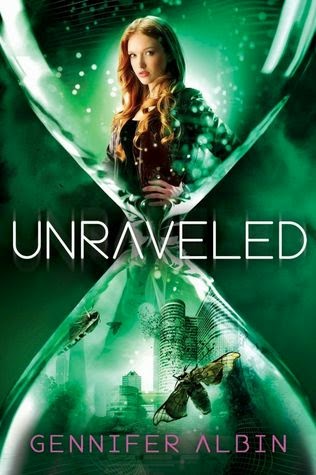 BLURB from Goodreads
Autonomous. Independent. Dangerous. They tried to control her. Now she’ll destroy them.Things have changed behind the walls of the Coventry and new threats lurk in its twisted corridors. When Adelice returns to Arras, she quickly learns that something rotten has taken hold of the world and Cormac Patton needs her to help him reestablish order. However, peace comes at a terrible price. As the Guild manipulates the citizens of Arras, Adelice discovers that she’s not alone, and she must let go of her past to fight for mankind’s future. She will have to choose between an unimaginable alliance and a deadly war that could destroy everyone she loves.


THE TRILOGY ~ BIND UP 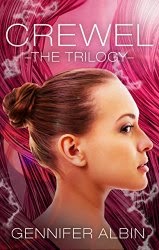 
Crewel, Altered, Unravelled
Gifted with the ability to weave time and matter, sixteen-year-old Adelice is exactly what the Guild is looking for, and in the world of Arras, being chosen as a Spinster is everything a girl could want. But when Adelice reaches the Guild, she uncovers a world of deadly intrigue. All is not as it seems, even the very fabric of Arras itself . . .
Adelice manages to escape from Arras but, amid the splendid ruins of Earth, she discovers how dangerous freedom can be. And when she finally returns to Arras, she finds that peace comes at a terrible price. Adelice will have to choose between an unimaginable alliance and a deadly war that could destroy everyone she loves. 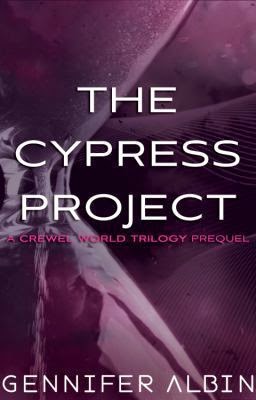 BLURB from Goodreads
Lucy Price spends her day much like other 16 year-old girls in wartime America: praying that her brother comes back from the front and hoping the war ends quickly. But as violence ravages the world, the end never seems in sight. All Lucy can do is wait and tend to her victory garden while her mother does her part at the ammunition factory in town. That is until the Department of Defense appears on her doorstep telling her she could end the fighting if she’ll join The Cypress Project. When Joshua O’Donnell’s father packs him off to Yale, forbidding him to enlist, he hopes his son’s brains will keep him off the battlefield. But Joshua’s knack for quantum mechanics draws attentions from his professor, a genius in the field of experimental science, who is working on technology that could end World War Two. Promised a nonviolent end to the war effort, Joshua can hardly say no to helping The Cypress Project. The war has made Howard Patton an even richer man. Son of railroad tycoon Randolph Patton, Howard was a millionaire before he was born, but with a war on, trains are more important than ever. It’s good business and Howard isn’t eager to see it end until the government approaches him with a proposal: fund the technology that could end the war and receive power beyond his imagination. But when Howard discovers the true nature of The Cypress Project, he realizes his real remuneration is the one thing that his money can’t buy. Completing The Cypress Project will force them all to make choices between love, destiny and freedom, but as the secrets of the experiment are revealed, each must decide between the bloody war being waged on the world’s soil and a deception that could change the course of humanity. 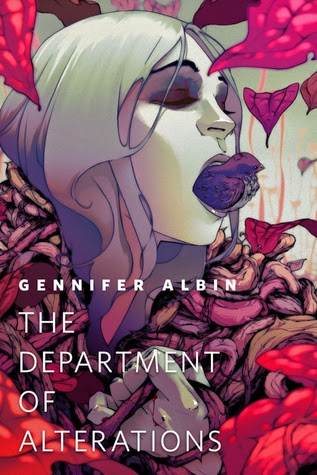 BLURB from Goodreads
In a world woven of secrets, a woman seeks a back-alley tailor for a sinister procedure, but she can't escape from her own tangled web of lies.The women of Arras are expected to fall into assigned roles, serve as loving wives, and provide healthy children into the world's tapestry. But perfection comes at a price and not even the looms of Arras can manipulate away every problem in the fabric of life. Something Karoline Swander knows all too well. She has a respectable job, an important husband, and she's about to commit treason. 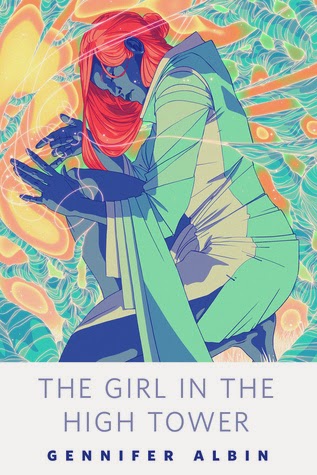 BLURB from Goodreads
In Arras time and space can be manipulated—and so can people. Beautiful Spinsters work day and night in four coventries to ensure a perfect world, but above them all, at the top of the high tower, works the Creweler. Until the Creweler makes a decision to help a young girl escape. Now bound by the strands of the universe, trapped between her memories and mistakes, subject to brutal experiments, Loricel has one more impossible decision to make. The Girl in the High Tower is an original short story set in Gennifer Albin’s Crewel World. The final book in the series, UNRAVELED, is available October 7th.

Which is YOUR favourite?

I'd have to say I like all the covers pictured above to varying degrees and differing reasons. All the covers have a representation of the female character, Adelice on the them which I do like, from the haunting green eyes of Cover C, to Cover B's, aerial view of Adelice and finally the kind of profile type view of Adelice on Cover A.

Cover A - Features the main character Adelice pictured within an hour glass, rather like an old fashioned egg timer.  It shows the large landscape view of the Coventry building in the bottom half of the hourglass.  The hourglass/egg timer is quite relevant as at times within in the book Adelice is running out of time or up against time slipping away from her. As well as one of the main element of the book being the weaving of time. I do like the deep fuschia colour of the cover, my daughter (most of you know her from Rai29BookReadNReview, but, Rachel is also a fully qualified & insured nail technician, running her own business based at our home. I thought I should explain my possible references to Nail enhancement shades (lol) as we do tend to talk to one another in terms of Professional Gel/Gel Polish/Acrylic Shades) compares it to a professional CND shade called "Sultry Sunset".


Cover B - Features an aerial view of Adelice, and also depicts the different weaves that make up what you would see in the Crewel World. The pretty coloured strands of the weave are really highlighted on this cover and  really makes you think of what the weave must look like to Adelice. When you have read the book this cover is even more amazing to look at, as you imagine looking at the world and seeing through the eyes of Adelice. I like the swirly font of the title too which fits in with the era and setting of the book and the special functions and parties that Adelice has to attend as part of her duties. I love the colours of the cover, that give a very pretty, delicate and airy feel to it.

Cover C -  Features a full on face/portrait of Adelice's face, with her red hair and bright green eyes. Adelice has a fairly solemn look on face which upon reading the book you learn why and totally understand her expression too. This cover also features the green strands of the weave that Adelice see's all around her. Upon reading you will learn about the different shades of the weave and their representations.

So if I had to pick a favourite cover, which would I choose?  B I love the delicate feel to the cover and the representation of the colours and strands of the weave. I feel cover B truly fits the story of the book and makes you feel even more part of the story. when looking at the cover you are being shown how the world around Adelice looks to her.

So which is YOUR favourite?
Posted by Jeanz xx at 03:00