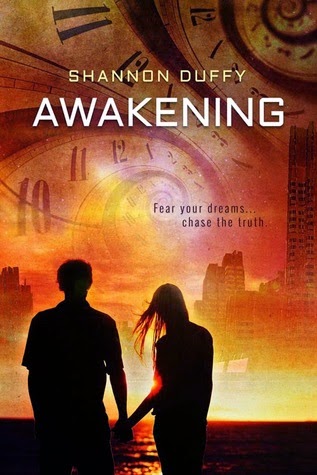 BLURB from Goodreads
A thrilling, futuristic sci-fi novel set in a unique and thought-provoking world, from author Shannon Duffy.Desiree Six (because she was born on a Friday) believes in everything the Protectorate stands for. She likes the safety and security of having her entire life planned out—her career, her mate, even the date of her death. She doesn't even think to question when Darian, her childhood friend and neighbor, is convicted of murdering his parents. They had seemed like such a loving family. But if he was convicted, then he must have done it.Then Darian shows up in her room late one night. He has escaped from the Terrorscape—a nightmare machine used to punish all Noncompliants—and needs Desiree's help. What he tells her rocks her world to its core and makes her doubt everything she's ever been told. With this new information, will Desiree and Darian be able to escape the Protectorate before it's too late?

INITIAL THOUGHTS
I have actually read another book by this author and loved it so I have high expectations for this book. I do like the level of description and writing style of this author. Then the blurb certainly piques my interest.

FINAL THOUGHTS
I also wanted to share the immediate thoughts that were racing through my mind as I finished reading the book at around midnight! I honestly did not want to put this e-book down at all. What a'twist" (I'm not sure if twist is the right word, it's more a shock discovery that Darian and Desiree have revealed to them at the very end of the book. It really sets off such a lot of questions in your head about the next book. This book is a great start, to a series that I can imagine being very addictive. Darian & Desiree thrown together and imprisoned together. The Protectorate try their best to break them. Help comes from an unlikely source. Can Darian & ,Desiree's love for each other give the! the strength to make it?