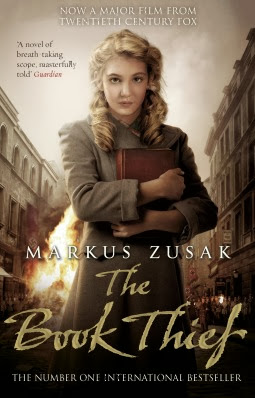 BLURB from Goodreads
The extraordinary #1 New York Times bestseller that will be in movie theaters on November 15, 2013, Markus Zusak's unforgettable story is about the ability of books to feed the soul.It is 1939. Nazi Germany. The country is holding its breath. Death has never been busier, and will become busier still.Liesel Meminger is a foster girl living outside of Munich, who scratches out a meager existence for herself by stealing when she encounters something she can’t resist–books. With the help of her accordion-playing foster father, she learns to read and shares her stolen books with her neighbors during bombing raids as well as with the Jewish man hidden in her basement. In superbly crafted writing that burns with intensity, award-winning author Markus Zusak, author of I Am the Messenger, has given us one of the most enduring stories of our time.

MY INITIAL THOUGHTS
My honest initial thoughts approaching this book were I was either going to love it or hate it. I got the totally wrong impression and imagined the book to be slow paced and maybe a bit on the depressing side to read. I have had another paperback version of this book in my hand pondering purchasing but something always made me put it back on the shelf and walk away.
At 17% I am surprised that I am finding this book an interesting and somewhat educating read.
My comment at 65% is that this book is extremely interesting as it is set in a well known era of history yet this book shows you how even the Germans who lived in Munich actually suffered at Hitler's hand and didn't necessarily agree with his dictatorship or aggressive actions.

Brilliant book, a MUST read. This book is filled with realistic characters who you grow to love so much you mourn them when they are no longer there. 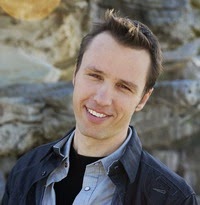 Information from Goodreads
Markus Zusak was born in 1975 and is the author of five books, including the international bestseller,The Book Thief , which is translated into more than forty languages. First released in 2005, The Book Thief has spent a total of 375 weeks on the New York Times bestseller list, and still remains there eight years after it first came out.His first three books, The Underdog, Fighting Ruben Wolfe and When Dogs Cry (also known asGetting the Girl ), released between 1999 and 2001, were all published internationally and garnered a number of awards and honours in his native Australia, and the USA.The Messenger (or I am the Messenger ), published in 2002, won the 2003 Australian Children’s Book Council Book of the Year Award (Older Readers) and the 2003 NSW Premier's Literary Award (Ethel Turner Prize), as well as receiving a Printz Honour in America. It also won numerous national readers choice awards across Europe, including the highly regarded Deutscher Jugendliteratur prize in Germany.It is The Book Thief , however, that has established Markus Zusak as one of the most successful authors to come out of Australia. To date, The Book Thief has held the number one position at Amazon.com, Amazon.co.uk, the New York Times bestseller list, as well as in countries across South America, Europe and Asia. It has also been in the top five bestsellers in the UK and several other territories. It has amassed many and varied awards, ranging from literary prizes to readers choice awards to prizes voted on by booksellers. It was the only book to feature on both the USA and UK World Book Night Lists in 2012, and has now been adapted into a major motion picture. The Book Thief (the film adaptation) is directed by Emmy Award-winning Brian Percival (Downton Abbey) and was shot in Berlin by Twentieth Century Fox. The cast is headlined by Academy Award winner Geoffrey Rush (Shine, The King’s Speech) and Academy Award nominee Emily Watson(Breaking the Waves, Anna Karenina). It also includes exciting new talents Ben Schnetzer, Nico Liersch, and Sophie Nelisse (Monsieur Lazhar), with Nelisse cast as The Book Thief , Liesel Meminger. The Guardian calls The Book Thief “a novel of breathtaking scope, masterfully told.” The New York Times: “Brilliant and hugely ambitious…the kind of book that can be life-changing.” The Age: “an original, moving, beautifully written book.”Markus Zusak grew up in Sydney, Australia, and still lives there with his wife and two children.
Posted by Jeanz xx at 03:00