WISHLIST WEDNESDAY - THE LAST SHE BY H.J. NELSON

Described as The 100 meets The Hunger Games in this post-apocalyptic romantic adventure about the last woman on Earth seeking to discover the truth of her existence after a mysterious plague wipes out the female population and she is taken captive by a clan of men risen from the ruins. 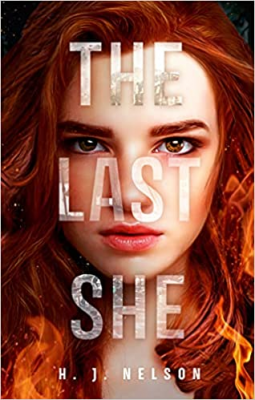 As the only female to survive the devastating virus, Ara hasn’t seen another human in months—not since her father disappeared. The plague has swept away humanity, and Ara’s world is desolate, haunted by the ghosts of her former life. Her mother. Her sister.

Kaden and his crew live by a code: stay alert, stay alive. When they catch Ara stealing from them, they are furious—and confused. She is the first girl they have seen in three years. And while Kaden knows taking her captive is wrong, he tells himself he’s doing it to protect her.

But with Ara determined to follow through on her father’s mission—Go back to the beginning. End the plague—Kaden becomes mesmerized by Ara’s will and beauty. He knows he will do anything to help her, even if it tears their worlds apart.
Goodreads Link
PURCHASE LINKS
Amazon US
Amazon UK