BLOG TOUR - THE RIGHT SIDE OF RECKLESS BY WHITNEY D. GRANDISON

When a bad boy in need of a second chance meets a good girl who is off limits, sparks fly and forbidden friendship forms in this edgy own-voices romance, perfect for fans of Katie McGarry and Kristina Forest. 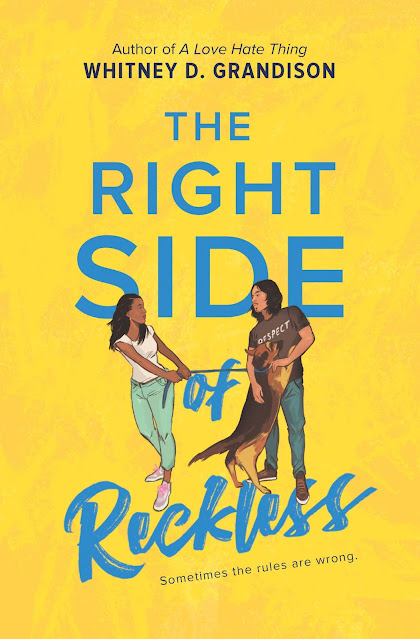 Guillermo Lozano is getting a fresh start. New town, new school, and no more reckless behavior. He’s done his time, and now he needs to right his wrongs. But when his work at the local community center throws him in the path of the one girl who is off limits, friendship sparks…and maybe more.

Regan London needs a fresh perspective. The pressure to stay in her “perfect” relationship and be the good girl all the time has worn her down. But when the walls start to cave in and she finds unexpected understanding from the boy her parents warned about, she can’t ignore her feelings anymore.

The disapproval is instant. Being together might just get Guillermo sent away. But when it comes to the heart, sometimes you have to break the rules and be a little bit reckless…

Fresh off the plane and I was already making trouble.

The security guard was staring at me like I was some type of criminal. He stood across from us as we came out of the gate into the terminal at the Akron-Canton Airport, and as soon as he caught eye contact with me, his brows pushed down and knitted together. His hand breezed over the Taser gun on his utility belt, while he stuck out his broad chest.

Sizing him up, I knew I could take him. He wasn’t that big. But with the way my mother was looking at me, I knew it was better to ignore him.

“Keep walking, Memo,” my father said, shoving his carryon bag into my spine.

I stole a final glance at the security guard. He was still glaring at me.

Like the diligent son I was now trying to be, I obeyed my father and kept moving, catching my younger sister, Yesenia, shrinking beside me.

Jostling through the airport, we made our way to the baggage claim, gathered our bags, and prepared to leave. Upon heading toward the exit, I was surprised to see Mr. Security Guard by the door. The glare was still on his face, but this time, he was shooting his dark steely gaze at some other guy.

Guess it isn’t just me. For once.

I was used to this type of judgment.

The car service my father had arranged was waiting outside. Our driver was standing in front of a Honda Pilot, holding up a sign with our last name stamped on it.

My father quickly introduced our family before helping the man stow our luggage in the vehicle. At my attempt to help, my father shooed me away.

Having no choice, I handed him my bag, and then I got in the middle row beside my mother and sister.

“It’s going to be okay, Memo, don’t worry.” Yesenia reached out and squeezed my hand gently.

I averted my gaze out the window, not seeing things her way.

“You should listen to your sister, she’s right,” my mother said.

Once the driver and my father finished packing the trunk, the driver took the wheel while my father sat in the passenger seat.

As soon as we were on the road, my father faced me with a serious look. “We’re back now, Guillermo, and things aren’t going to be like before. Understand?”

My father grimaced, as if he doubted me. With my mass of screwups, I didn’t blame him. “Don’t forget to call your probation officer first thing in the morning.” He spoke with bitter disappointment laced in every word. “Remember, if you mess this up, it’s back to jail for you.”

I gritted my teeth. Back to juvie? Fuck that. “I know.”

Two weeks in Mexico and nothing had changed.

They still hadn’t forgiven me for what happened back in March. Hadn’t even mentioned it to the relatives we’d just visited. I couldn’t blame them. Unlike the times before, I had fucked up royally.

I stared outside for the remainder of the drive. Summer had slipped away while I was locked up. Now fall was here, a new season, a new beginning. It was seven fifteen at night, the sky above us a reddish orange as the sun sank lower on the horizon. Soon, the leaves on the trees would match.

We got off the highway and began to pass closing businesses as streetlights flickered on. I watched all this, trying to feel a sense of rebirth. A piece of optimism.

While I was…away, my parents had packed up our house and sold it. They had purchased a new place on the east side of Akron and made it clear we were moving on from the past up north.

Less than thirty minutes later, the driver pulled in to a subdivision called Briar Pointe. A subdivision, as in row upon row of houses that looked exactly alike, as in too bland and boring, unlike the neighborhood we’d lived in before.

A late-night jogger breezed by, her blond ponytail swishing behind her, and I raised a brow. Where we’d come from wasn’t exactly dangerous, but nobody ran, especially at night.

The driver came to a stop in front of a medium-size two-story house complete with an attached two-car garage. I gazed at my new home. It was my clean slate, my second chance— or more like my last.

We all vacated the car and grabbed our bags from the trunk.

My mother gathered the house keys and took the lead to the front door with Yesenia and me behind her. My father tipped the driver, and the man drove off.

After I got home from juvie, and before our sudden trip to Mexico, my family and I had only begun unpacking here. Now it was almost the second week of September, and Yesenia and I had missed the first week of school.

After spending spring in and out of court and a lovely ninety-day stay at a detention center, where I’d caught up on all the schoolwork I’d missed, I would be serving my probation in a new part of the city with a fresh start. However, it was beginning to appear as though there was no moving forward as far as my parents were concerned.

They no longer looked at me as their son, but as a petty criminal and a burden.

And given that in the morning I would meet with my parole officer, I couldn’t blame them. I was newly seventeen and already the Patron Saint of Fuckups who couldn’t be trusted, as far as they knew.

“Guillermo.” My father spoke softly behind me as we entered the house and Yesenia and my mother disappeared down the foyer around a corner.

I didn’t face him. There were only so many times I could see that look in his eyes. “Yes?”

I turned and found him already making his way to the door that led into the garage. Each step I took after him felt heavier than the first, my anxiety causing sweat to bead down my back.

Inside the garage, my father stood back, waiting for me.

I barely glanced at him before my gaze landed on the two vehicles. One, my mother’s silver Acura, and the other, a dark blue Charger. The shiny, vibrant paint made its beauty stand out.

My father cleared his throat. “Matt knew a guy who could restore it, and it took some bargainin’, but it’s yours.”

Another glance from him to the car, and I realized what this was and what this meant. Back in the day, when my father’s brother, my tío Mateo, still lived in Akron, he used to keep this beat-up old Charger in his driveway. Tía Jacki used to complain about it, but Mateo wouldn’t part with it, swore it was a project in the making. Whenever I was bored, I’d climb in behind the wheel and pretend to drive it, pretend I owned the road, pretend to be as cool as Tío Matt.

Fast forward to today, and gone were those rust-stained doors, replaced with a solid body and fresh paint. Even the inside was new. I leaned over to gape through the passenger window. The black seating and updated system had me grinning like a fool.

Tío Mateo lived in Columbus now, but the gesture wasn’t missed. I faced my father, my smile instantly slipping away at the sight of his stoic face. “Thank you, both of you.”

My father gave me a stiff nod. “I just don’t want to be responsible for driving you around. Keys are on the hook by the door.”

During the whole ordeal, my mother had attempted sympathy, but not once had my father offered any. The moment I was released from juvie, they shielded Yesenia from me and started keepin’ a close eye on us, as if my bad seed would catch on.

“I shouldn’t have to reiterate that this is a new start. You will not be in contact with any of your old friends. Especially that girl,” my father ordered. “You will go to school, complete your required community service, meet with your probation officer, and stay out of trouble. Do you hear me?”

My fists balled at my sides. “Yes, sir.”

“And…” He paused, as if thinking of more things to add to his list of demands. “Get a haircut.”

To this I didn’t reply. He’d been after the length of my hair since freshman year. Now that I was a junior, you’d think he’d let it go. I would admit, my wavy hair combined with my facial hair did make me look rough around the edges. The judge had taken one look at me and scowled. No wonder that security guard at the airport had kept his eye on me.

“Your mother’s going to order some food. Go put away your bag and come down,” my father said.

Dinner with my family was often eaten in loud silence.

He didn’t fight me on it as he went to join my mother and sister.

With a heavy sigh, I raked a hand through my chin-length hair and headed up to my room. I was out, I was somewhere new, and I had a car. I couldn’t fuck up, not again. Hearing my mom up one night crying—that had hung heavy on my heart for weeks.

This move was my chance to prove that I could evolve.

There were no ifs, ands, or maybes. I was going to do better.

Excerpted from The Right Side of Reckless by Whitney D. Grandison, Copyright © 2021 by Whitney Grandison. Published by Inkyard Press. 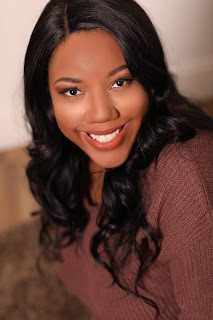 Whitney is dedicated to telling stories about teens of color and teens in difficult but relatable situations. Some of her works can be found on Wattpad, one of the largest online story sharing platforms, where she has acquired over 30,000 followers and an audience of over fifteen million dedicated readers. Outside of writing, she is a lover of Korean dramas, all things John Hughes, and horror films. Whitney currently lives in Akron, Ohio. She is the author of A Love Hate Thing and The Right Side of Reckless.