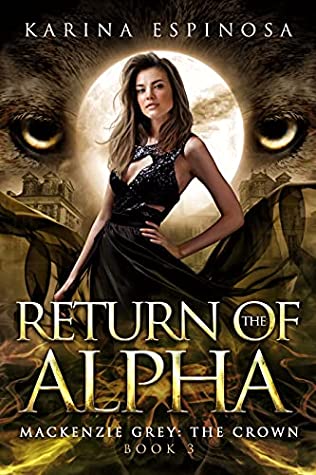 BLURB from Goodreads
Happily ever after … at least I hope.

When it’s come to my friends and family, I’ve been willing to sacrifice just about anything to save them, but these last few months I’ve been sidelined from the fight—not anymore.

The time has come, and Abaddon is finally coming to collect what he was promised—and he is not alone. Those who I once thought were my allies, and others who I worried would stab me in the back have now partnered up with the demon to take what I hold most dear to my heart.

Some will be hurt, some will survive, and others will die in this battle to the finish.

Will we get the happily ever after we desire? Or will it all come to an end here?

REVIEW
I have seen a few different cover styles for this book series, but I do honestly love the style of the covers. I think the female on the cover fits the imagery created in the book for Mackenzie Grey very well. It projects Mackenzie’s strong, determined, kick butt character well. The cover is quite dark to look at and that fits really well as Mackenzie has some dark forces to face and defeat in this final book.

I have read and truly loved this series from the very first book, Shift which was published back in early 2015, right up until this book. I honestly didn’t really want the series to end as I loved the characters, world building and everything about it really. So, I was approaching reading the book with a bit of apprehension about how things would end, and whether I would be left happy and satisfied with it, or if I would feel there should have been more or perhaps a different ending.

It’s difficult to say a great deal about the plot and exactly what happens without revealing anything major. I wouldn’t want to spoil the reading of the book and the events in it unfolding for anyone else.

I have loved the ups and downs in Mackenzie and Sebastian’s relationship and there’s been plenty. There are still issues in this book too. They both clearly adore each other and would do anything for the other. The problem is they come up with ideas and possible solutions without speaking to each other first, thinking they are not worrying each other which ends up causing them each more problems. Bash ends up coming across distant and uncaring which then irritates and upsets Mackenzie pushing her into rash decisions and making her push back and leave Bash out of her life.

I adored the scenes of the Brooklyn Pack fights for the position of Captain. The inner turmoil Mackenzie has not been able to help, and be seen to be biased in favour or even support of her brother Ollie. Naturally her enemies are determined to interfere and use anything or anyone they can to upset or even attempt to control Kenz. It’s so important that Ollie wins the fights and becomes the new Captain in the Brooklyn Pack. After speaking with Jackson who informs her, he has set up a live feed so she can watch the Captaincy fights from her castle in Scotland, Kenz has cross words with Bash and on a sudden whim decides to go to New York herself to watch the fights in person and to visit her best friend, Amy. As Kenzie’s pregnancy is still not widely known about, she attempts to hide her growing figure wearing baggy clothes. However as soon as Amy hugs her best friend the “cat is out of the bag”. Of course, Amy is overjoyed at the news and eager to be an Auntie!

I laughed out loud at the scene where Kenz knocks on Ollie’s bedroom door and barges in only to find him in bed with a Luna! Her guard puts his hands over her eyes and guides her out of the room, whilst an equally embarrassed and irritated Ollie hastily puts on some clothes to hug his sister. Kenz isn’t impressed at finding Ollie in bed, when in her opinion he should be training, so she sends him off with William her own guard, and royal guard trainer to put him through his paces. Later she talks to her brother, telling him he needs to think like the animal he now is and he must fight the Luna in the Captaincy battle just as hard as he will fight the male opponents. There’s a lot hanging in the balance, though Kenz doesn’t reveal Ollie’s possible fate if he doesn’t win and become Captain as she doesn’t want to put anymore pressure on him than he already feels.

As I think I have said before about these books, I love all the characters. The good, amazing ones like Kenz, Bash, Ollie, Jackson and Amy. The bad, evil one’s like the demon Abaddon, the tricky, sneaky fae Angus, and council & summit members Jacob and Lucas. Then there’s the what I’d describe as the “grey area” ones, the God, Fenrir, the Warlock, Bobby Wu and German Alpha Stefan.

What I also really thought amazing were the array of kick butt female characters, from Kenz who has been fighting for her rights and her life from the first book all the way through the series. I loved the way the female characters were as tough, if not at time tougher than the male characters. Kenzie’s best friend Amy is a fantastic example, the human who was first to know about what and who Kenzie was and helped her in the face of increasing danger to herself. Then when fatally injured and a rash decision from Kenz sees her friend becoming a vampire then back to human when Kenz manages to obtain a “cure” for vampirism. This final book in the series sees Amy living within the Brooklyn pack with the love of her life, Alpha Jackon, toughing it out and carving out her place amongst the pack, with not just the males being wary of her but also the Luna’s of the pack too. Another two great Luna’s are Rowan who is putting herself in increasing danger by acting as a spy for her Queen, Mackenzie. Then the Luna that lost her life but her character has lived on, inspiring Mackenzie to continue her fight for Lunas rights within all the Lycan packs in the world.

I also discovered the character of Raven, a Valkyrie in this series. Though Raven actually has her own series, The Last Valkyrie, which has been firmly put on my “to read” list after becoming acquainted Raven in this series!

Another character I cannot finish this review without mentioning is Bobby Wu, there are those who think he is bad through and through. When he disappears it appears, and some say he has abandoned Kenz to her fate. Mackenzie has more faith in Bobby Wu though, sure there’s been times when he used her for her powers, but when he is really needed he hasn’t let her down.

Mackenzie has a lot to face and fight for in this book. There’s Abaddon who wants her unborn child, which of course both Kenz and Bash say will only happen over their dead bodies. The Fae, are also determined to take the baby, putting themselves forward as a better option than the demon Abaddon. There are quite a few times you wonder who Kenz can really rely on in this book with council members, summit members and even Queens guard members working against her. Mackenzie also has to come to terms with the fact she honestly isn’t as strong without the full power of her inner wolf. In fact, Kenz has to suffer three months of bed rest which she hates with a passion. Even when she reveals she is pregnant, the problems keep on cropping up for her. Then when the baby is born, things become even more dangerous, so much so, the baby cannot stay with Kenzie until all threats to her and the baby are faced. Another thing Kenzie discovers in this book is that everyone has their weakness, such as Angus and his arrogance, Jacob and his greed for control of the throne. In fact, she even discovers Fenrir has a weakness. In this last book it’s clear that Mackenzie has matured, sure she can still make rash decision, but she is clever and has learnt to use her mind, and think strategy as well as using her brute force too!

My immediate thoughts upon finishing this book were that I honestly hated having to put this book down. I think if not for a migraine I could have sat and read this book in just one sitting! I still can’t quite believe that this is the end, no more Kenz & Bash! Where will I get my kick-butt female fix from now?

Summing up, I have thoroughly enjoyed the final book and I have loved the series from the beginning to the very end. Part of me wanted to read the book really slowly, so it would take longer to end but I was soon hooked and flying through reading the book, desperate to know what was going to happen. I will miss the characters, maybe they will pop up in a different series by Karina Espinosa, like Raven from The Last Valkyrie featured in this series as well as her own. I definitely think the end was all I imagined, wanted and even more. The books in this series will always remain in my top favourite series, my top favourite characters and of course Karina will always be in my top favourite authors!