Between humans, zombies, and the desire for brains,the world’s getting darker by the hour.And the two unlikely friendsneed one another more than ever.That doomed red-eye flight seems a lifetime ago… 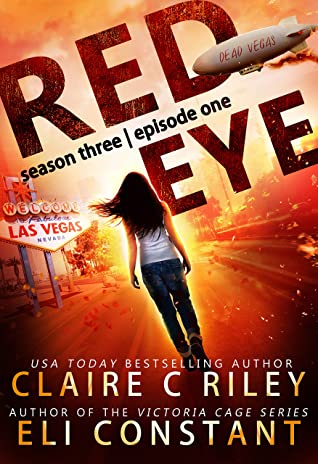 Title: Red Eye Armageddon: Season Three: Episode One
Authors: Claire C Riley & Eli Constant
Genre: Sci-Fi, Post Apocalyptic, Zombies
Release Date: 8th October 2020
BLURB from Goodreads
A new location brings new terror as Rose and Sam find themselves at the mercy of Barrett’s crew, the Sins.Now separated from both Sam and Nolan, Rose is a caged animal, terrified but determined to find the people she cares about the most. But how much can one person take?More than ever, Rose would give anything to be sat in a boring office back in England right now.Sam’s secret is never safe; that’s a reality she’s learning to live with. Barrett has protected her up until now, yet surrounded by his so-called family, she wonders how long it will be before he turns on her…Sam longs for the days when her biggest problems were a failed relationship, too many carbs, and a sprained ankle.Life has never been easy, not before the zombies and certainly not after. But even with the dead rising, it is the living that cause the most problems. It’s the humans that elicit the most fear, that make the apocalypse bloodier, that kill anyone necessary to survive.
Goodreads Link
PURCHASE LINKS
Amazon US
Amazon UK
REVIEW
Once again, the cover fits well with season one and two. On this cover there is the Las Vegas sign and that is where the characters are, in the midst of the Sins, the brotherhood of men that makes and sell drugs. Now down to the actual book, of course, as soon as I knew this one was available to read, I just had to buy it and read it straight away. It seemed like ages since I had been in this world with it four great main characters of Sam, Barrett, Nolan & Rose, but I need not have worried as it picked up right as the previous book left off and I fell right back into the great zombie, apocalyptic world so easily.

Wow! What can I say, there’s plenty going on in this instalment! What a place Sam & Rose find themselves in! Sam seems to be the one in a better position with what little protection Barrett can offer. If it comes down to him choosing between “his woman” Sam, or “his family” the Sins who will he opt for? Barrett tries his best to mark or make clear that Sam is out of bounds and is his and his alone but how long will he be able to hold the Sins leader Nathan, or even Nathan’s boss should he see Sam and want her? Barrett leaves Sam alone with Stash who he perceives as being safe, or at least he thinks Sam can fight him off if she needs him. Barrett does begin to push Sam to let out her inner zombie in this book. In fact, at one point it is Sam’s inner zombie that protects her from one of the Sins taking total advantage of her. The attack really shakes up Sam and she begins to see her inner zombie as something she can use to protect herself and others. Barrett is furious that Sam didn’t wait by the shower block as he instructed and treats her a little like a naughty child. Barrett is worried what will happen when Sam realises where Rose is and that he knew and didn’t tell her! Sam & Rose come so close to seeing each other, so many times in this book. It seems impossible that they can all be in the same place yet not know it. Having said that Nolan is only glimpsed and it isn’t totally confirmed it is him. What will happen when the girls eventually set eyes on each other again? Barrett will have to face the wrath of both Sam and Rose! Then he will face the difficult decision of whether he is with or against the Sins. As you are either with the Sins and all in, or you are an enemy of the Sins.

My favourite characters in this book are Sam & Rose both fighting for survival and having to face doing things they really would rather not be doing. Will they have to cross the line and allow their bodies to be used in order to survive the harsh world they are living in? Both young women have strong feelings on what is right and wrong and aren’t afraid to stand up for themselves but they are beginning to realise that they are facing as much danger from the surviving humans as they are from the zombies. I still love Nolan despite him sort of not being in this portion of the story, he is going to be furious when he finds out where Rose is and what is being expected of her. I am enjoying the too and fro between liking Barrett as he is protecting Sam, yet disliking him for not making an actual decision about which side he will be on should it come down to a choice between Sam & friends and the Sins.

My immediate thoughts upon finishing this book were How are Rose, Nolan and for that matter Sam going to escape the Sins? When it really comes down to it, who will Barrett choose, Nathan? Or Sam? Can Barrett & Sam help Rose & Nolan? So many questions!! Was great to revisit this crazy zombie filled world again.....looking forward to more . . . .I am reeeeally (im)patiently looking forward to more.