REVIEW - PHOENIX RISE - FROM THE ASHES BY KARINA ESPINOSA 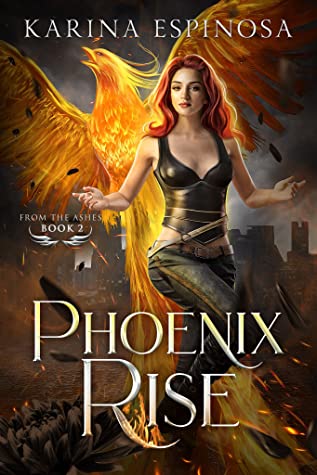 Title: Phoenix Rise
Series: From The Ashes
Author: Karina Espinosa
Genre: Urban Fantasy, Paranormal, Shapeshifters, Vampires
Release Date: 16th October 2020
BLURB from Goodreads
For someone who can’t die, it felt as if I were already dead.He took everything from me and I don’t have the energy or fight in me to get it back. Not that I could. What he took is long gone and never coming back.The pain of what he did—what I did—will haunt me for the rest of my life. That is until I met a certain angel in the cell next to mine and I knew I couldn’t give up yet. Everything might have been taken from me, but I was not alone. Far from it.To gain my freedom, I made a deal with the devil, but will that deal burn me in the end?
Goodreads Link
PURCHASE LINKS
Amazon US
Amazon UK
REVIEW
I really love the cover of this book, it features the kick butt, female main character, Octavia/Camila with her fiery red hair and attitude! It certainly makes for a striking cover and fits really well with the cover of bk 1. Definitely looking forward to seeing the cover for bk3.

So, I picked this one up meaning to read just a chapter or two and read eight! Talk about addictive reading! This one picks up right where bk1 left off and we are straight back into the action! Karina Espinosa doesn’t mess about! The book begins with Octavia waking up in a strange room, or should I say coming round from being kidnapped and sedated! Octavia looks around the room, taking note that the room is luxurious. She is laid on a plush, large, king size bed, there’s an amazing lavish ensuite. Octavia investigates the various wardrobes and drawers all containing opulent clothes to fit her. You could say she has everything she could ever want except a window or her freedom. The man that stole her away from Tristan is referred to as Morningstar, or “the master” by the two women/maids that visit her daily to extend his invitation for her to eat dinner with her. Octavia is strong and determined and bluntly refuses to eat with the master. Day by day and its clear both Greta & Rita think Octavia is just being foolish and stubborn by not having dinner with Morningstar but she continues to refuse and loses her strength along with weight until one day the two women/maids whose names she has learnt are Greta & Rita enter her room and announce she is having dinner with the master and they are there to get her ready, and wow do they give her a make-over, from bathing her to dressing her and doing her hair. At first Octavia is annoyed at being summoned and forced to go have a meal with Morningstar, then she thinks of it as an opportunity to take a look around her grand, extravagant prison for possibilities of escape routes.

Octavia can put on an act to an extent but fails to fool Morningstar and she ends up imprisoned in a damp, dark, dungeon-like prison cell. It’s whilst she is there that she strikes up a conversation with the occupant of the next cell. It turns out Michael has been captive a very long time and remembers her grandmother Cecilia. Michael tells Octavia stories about Cecilia. Though Michael becomes a friend and confidante to Octavia he isn’t totally honest about who he is until much later. When it becomes apparent, only he can help Octavia, though at certain sacrifice, and by breaking some rather important rules on his part will he help? Morningstar thinks not, gloating, telling Octavia she is all alone and Michael will never break the rules to help her.

I can’t say much more about the plot without in my opinion revealing too much but Morningstar certainly underestimates Octavia’s newer friends such as Echo, Tristan, Maverick and Killian & his pack. In fact, I think Morningstar thinks he will be able to control Octavia much easier than he manages to. He seems to have really gotten into her head and she has really vivid dreams that he is in, though she tries to hide this from her friends. Octavia does gain more control over her Phoenix and learns how to concentrate and use her fire to both protect and defend herself as well as fighting back at the bad guys! Unfortunately, Octavia wears her heart on her sleeve and at times sadly for her takes people at face value, she is still quite naive when it comes to how the paranormal world works. Octavia trusts the wrong person whilst trying to protect others and ends up being bound to the one person she wants to get away from permanently. Octavia really does learn about some of the nastier paranormal beings the hard way with the devil, and angel, demons and another phoenix being introduced in this instalment of the trilogy.

Phoenix Rise features all the great characters of bk1 and introduced some more amazing characters too! I am honestly loving the different characters/paranormal beings in this series..... I am already adding Oksana to my favourite characters list. She may have grey hair and be in her 70's but she sounds like another kick-butt, no nonsense female to me. Karina Espinosa really does kick-butt female characters and swoon-worthy, book-boyfriend male characters so very, very, well.

I still loved the same characters that were in bk 1 and would add some more of Killian’s male pack members to the “book boyfriend” material list. I really liked the way Kai referred to Octavia as “firecracker.” Tristan shows even more that he isn’t the usual cold, heartless type you’d expect a vampire to be, though he still doesn’t share Octavia well with others and has one hot temper on him, which he displays on more than one occasion in this bk. I found the scene where he shows Octavia where her family is buried and the headstone with her name Camila on it very moving & poignant. Despite leaving her life as Camila far behind her and having lost those who knew and loved her as “Camila” she doesn’t seem sure what to do. Though most people refer to her as Octavia I don’t think she has fully accepted her life has changed so much and that there really is no way of going back to being Camila. I did notice in this book that Echo doesn’t seem to be very keen on how close Octavia and Tristan are becoming, is it the concern for her friend getting hurt, or maybe jealousy?

My immediate thoughts upon finishing this book were, what a whirlwind of action and once again this book ends with a cliffhanger.....will Michael obtain what is needed to remove the mark from her hand in time? Or is her mind going to be overtaken completely by the mark?

To sum up I really, truly, love this trilogy so far and am sooo impatiently awaiting the next book already, though at the same time I hate that the series is coming to an end. What more can I say another absolutely fantastic series from Karina Espinosa!