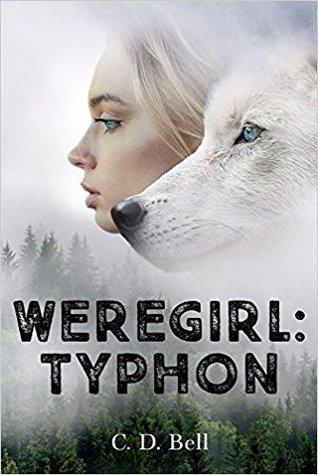 BLURB from Goodreads
Three sisters, together for the first time since birth: Nessa, a werewolf with powers she can now control. Delphine, whose mastery of technology borders on magic. And finally: the chimera, a construction of their fathers lab built from the Kurland sisters DNA, whose very existence threatens them all. Nessa has begun summoning a new skill that she does not understand: halos of color are appearing around people and animals, but what do they mean? And why are the darkest shadows surrounding Delphine? Who are the kids that lurk in the dark corners of the woods? Are there other wolves and shifters that Nessa doesnt know about? Daniel Host, Nessas father, has called together a group of special researchers and scientists to view the ultimate creation. All eyes are on him. And a storm is coming...In this epic conclusion to the Weregirl trilogy, Nessa must battle science and magic, leading her family away from the evil that threatens them all.

Well I have been eagerly awaiting this books release as I enjoyed the first two so much, just a shame this is the last book in this trilogy!

I absolutely love the cover showing the background woods and trees which feature heavily in this book. I think the female face and the white wolf face and their position is great, this cover would really make me notice it on a book shelf! I'm not sure what the title of the book refers to at first glance but it is thoroughly explained within the book.

I totally agree with the genre listings I have seen for this book which are, supernatural, fantasy, sci-fi, teens & YA. I am definitely not a teen but I enjoyed this whole series from the point of view of an adult reading the book. I guess I would add shape-shifter, and werewolf to the list of genres.

This book has Nessa the weregirl, sister Delphine and younger brother Nate still grieving or their mother and getting used to the upheaval of living with their scientist father, Daniel. Also, at the very centre of the book and in the majority of the action is Daniel's living genetic experiment, the Chimera that was developed from the same egg as Delphine which in a rather disturbing way makes them twins. In act during certain parts of the book the chimera is referred to as "Delphine chimera". The really disconcerting thing is that Delphine chimera really has a striking resemblance to the fully human Delphine. Delphine chimera is soon referred to as CM. Like I said there really is a lot going on. Nessa speaks to Delphine and they decide to ask their father to allow CM to live in the house with them as part of the family, as genetically she is. There are still some issues within the "humans" already in the family. Delphine has really withdrawn from Nessa and has to work through other issues too. Add CM to those other issues and you wonder if she will ever become integrated into the family unit or will she be the other element in her personality take over, making her a monster that some of the scientists believe she truly is.

In this book Daniel is hosting a group of foreign scientists who want to come and look at CM. It’s kind of sad really because CM is still more of a project than a valued member of the family. CM is put on show in a new high-tech lab/home for all the other scientists to discuss whilst Daniel draws her blood, and injects her with various things. There is an interesting section in the book where Daniel is given a choice rather like the one he had to make when Vivian and he were together. The choice between his genetic experiments and his wife and children resulted in Vivian leaving and him continuing his scientific experiments. Who/what will Daniel choose this time?

Of course, this book has most of the great characters we have come to love in the first two books of the series. Bree is in this book despite living back in Tether. Bree and Nessa facetime each other regularly and its clear to see that their friendship can and will survive the distance between them. Nessa still turns to Bree or support when she isn’t sure about things. Nessa has even more changes to deal with and as few people know of her ability to change into a wolf. Nessa has to confide in Bree and Professor Halliday. Professor Halliday provides Nessa with any information she has on these changes Nessa to try to help her accept and use this new ability. I found her new talent/power fascinating and enjoyed reading along as she learnt how to adapt, come to terms with it and use it well too.

Nessa still tries to keep her ears open about the Paravida wolves and their new leader Luc. It’s a shame he didn’t feature more in this book but hey we had new characters.
The new characters that are introduced into this book are the young runaways that live in the woods. Bo, the leader of the forests dwellers soon becomes rather close to Nessa. Delphine finds herself being drawn to these runaways as she can identify with them.

My immediate thoughts upon finishing this book were that this had an amazing build up to a tension filled climax that affects a lot of people and their future lives and careers.

After completing the Weregirl series of books I have to say I really enjoyed it rom the first book to the last. I’ve seen other reviews that have compared this book to the Teenwolf TV show and I do agree it is a good comparison and I could certainly imagine this as a film or TV Show. It really is that good. There’s lots more I could have told you but I don’t want to reveal anything too spoilery.