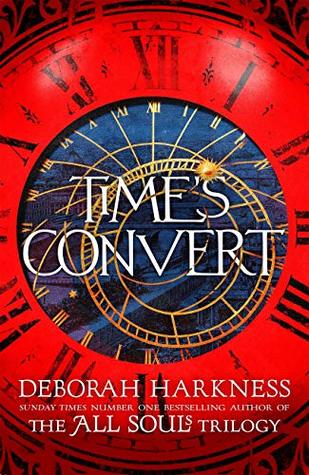 BLURB from Goodreads
From human to vampire ...
Marcus Whitmore was made a vampire in the eighteenth century. Over two hundred years later, he finds himself in love with Phoebe Taylor, a human who decides to become a vampire herself.
But her transformation will prove as challenging now as it was for Marcus when he first encountered Matthew de Clermont, his sire.
While Phoebe is secreted away, Marcus relives his own journey from the battlefields of the American Revolutionary War, through the treachery of the French Revolution to a bloody finale in New Orleans. His belief in liberty, equality and brotherhood challenged at every stage by the patriarchy of the de Clermonts.


What will he and Phoebe discover in one another when they are finally reunited at Les Revenants, beneath the watchful gaze of Matthew and his wife, Diana Bishop?
Goodreads Link

The cover is certainly striking! It is an eye-catching bright red clock & surround and the inside is a beautiful night sky blue. This cover was the first thing that attracted me to the book and encouraged me to want to read the blurb, To be totally honest until I had read the blurb and decided I wanted to read it I hadn't even noticed who the author was.

The genre I have seen listed for this book is Historical Fiction however I would also add Paranormal, Fantasy & Romance too. I really enjoyed the mixture of paranormal's featured in this book. It primarily has Vampires, Witches, Daemons and Warmblood's. Warmbloods is what humans are referred to in the book.

So I guess most people will have been watching the Discovery Of Witches on Sky TV. I probably should point out I have neither read the book or watched the TV program, though I have pre-ordered the DVD as I have heard so many book friends enthusiastically recommending it.

Within the first few pages I felt drawn into the book I enjoyed being introduced to all the different characters.

I guess you could say the book is kind of told from three different points of view. There's the "present" day with the character of Phoebe who is to become a vampire to be with Marcus her chosen love forever. Phoebe and Marcus have decided to do Phoebe's turning and transition the more old fashioned way. An older vampire will bite Phoebe and give her blood in return as well as mentoring her until she is under control enough to safely go among the worlds normal citizens without putting anyone's life at risk.

Another of the viewpoints is also set in the "present" that of Diana, a witch mated with a vampire called Matthew De Cleremont. Their pairing is an unusual one and did go against convention, but they have so far proven they are mates. They have twins, a boy called Philip, Pip for short and a girl called Rebecca and called Becca for short. These two children are an unknown entity really as they are half vampire and half witch. No one is sure which trait will be dominant or how the children will turn out. In fact some vampire members of the family believe that Diana should cast some sort of spell on her children binding their powers so they cannot use them at all. The De Cleremont twins are involved in some rather funny situations. For example, Becca is a biter! Which most warmblood children go through a phase of biting but the fact Becca is a vampire and may accidentally bite another vampire is a worry as any vampire bitten by Becca could retaliate and kill her.

The third section or point of view of the book is when Marcus discusses his past with Diana who is really keen on history. Despite Matthew saying no one should ever ask a vampire about their name or their past Diana cannot help encouraging Marcus to reveal his past when he starts talking about it. We learn the reason Marcus had to leave his home in Hadley, when he shoots and kills his father Obadiah whilst attempting to protect his mother, Catherine and his sister Patience from further abuse and another beating. I loved how Marcus' name seemed to change regularly and sometimes quite accidentally.

The sections describing how Phoebe is discovering and coping with her new vampire talents such as the hearing, the vision and stronger feelings were quite detailed and so descriptive. They were certainly interesting, such as Phoebe befriending the cat whom she is supposed to feed from as a "baby" vampire and is told not to get too attached to as she will probably kill the cat. Phoebe has other idea's and names the cat,and manages to feed without killing it.

I should admit I did have a bit of difficulty with some of the historical dates, jargon etc. At one point I actually thought about leaving the book for a while and coming back to it. I was even advised that I should have probably have read the All Souls Trilogy prior to starting Times Convert. I stuck with it and once we as readers started to get to know more about Marcus and his life, or maybe I should describe them as his lives I felt compelled to read on to learn more about this man who was fascinating and had many names and had reinvented himself before he became a vampire. The book reveals how Matthew sired Marcus and how with the help of the rest of the De Cleremont he taught Marcus the very rules Miriam is teaching Phoebe in the present day. It is really interesting seeing how things have changed or sometimes not changed between the era Marcus was made a vampire and the present day and the issues she has to overcome and the rules she must learn to obey. I thoroughly enjoyed learning the vampire etiquette through the eyes of Marcus, also observing the different members of the De Cleremont family and how their etiquette expectation slowly change or adapt and then seeing the most modern vampire etiquette through the eyes of Phoebe.

I really liked a lot of the characters such as Phoebe's family being surprisingly understanding about her decision to become a vampire to be with Marcus forever. I enjoyed disliking the rather jealous sister of Phoebe who it seems has always been the centre of attention and is quite willing to reveal her sisters secret if she can benefit from it in any way.

I loved the relationship between Matthew and Diana and their stand against interfering in what ate will decide about their children's futures. Philip and Becca sound adorable and I thought it amusing that Becca has the big tough guy vampire Baldwin around her little finger, he really dotes on her.

Another character I loved was Ysabeau the strong female vampire who is head of the family and to be feared, admired and loved by the rest of the De Cleremont family. Ysabeau is mother to Matthew and grandmother to Marcus.

My immediate thoughts upon finishing this book were that I couldn't believe that I almost stopped reading this book! I am so glad that I stuck with it and in the end I really did enjoy it. This book has certainly made me want to read the All Souls Trilogy as well as hoping for more following the Times Convert book.

So now my dilemma is do I try to read the Discovery Of Witches before I watch the TV show? I think I probably should. . . .I have purchased the All Souls Trilogy ebook ready to read. I have so many books to read. . . like most other book lovers I would love more time to dedicate to reading and reviewing!