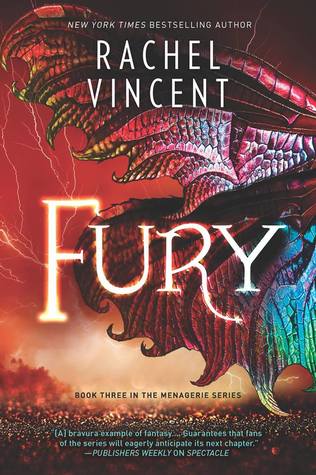 BLURB from Goodreads
1986: Rebecca Essig leaves a slumber party early but comes home to a massacre—committed by her own parents. Only one of her siblings has survived. But as the tragic event unfolds, she begins to realize that other than a small army of six-year-olds, she is among very few survivors of a nationwide slaughter.The Reaping has begun.Present day: Pregnant and on the run with a small band of compatriots, Delilah Marlow is determined to bring her baby into the world safely and secretly. But she isn’t used to sitting back while others suffer, and she’s desperate to reunite Zyanya, the cheetah shifter, with her brother and children. To find a way for Lenore the siren to see her husband. To find Rommily’s missing Oracle sisters. To unify this adopted family of fellow cryptids she came to love and rely on in captivity.But Delilah is about to discover that her role in the human versus cryptid war is destined to be much larger—and more dangerous—than she ever could have imagined.

REVIEW
I'd been regularly checking to see when this book was due to be released because I really wanted to read this book as soon as I possibly could.

The cover Fury fits beautifully with Menagerie and Spectacle. I have loved all the covers though if I had to pick just one out of the three as a favourite it would have to be Spectacle.

The genres listed for this are Fantasy, Urban Fantasy, Paranormal & YA. Sure I agree with all those, but would add I am definitely not in the YA bracket and I totally adored this book and series. It has become one of my favourite book series!

This book is brilliant, it has totally amazing characters and a fantastic plot which makes it a perfect read for paranormal book readers, though I don't think you have to be a specific paranormal fan to read and enjoy it.  Normally at this point in my review I choose a favourite character, and though I adore Gallagher and Delilah there are so many other fantastic characters and you learn both the good and bad points of being their particular breed/race. For example I guess when you think of an Oracle you think it would be great to know what will happen in the future but then think a little more, as if you can see the good in the future you will also see the bad and have the knowledge there is nothing you can do to change it.
I became attached to the smaller characters of Lenore the siren, Rommily, one of the oracles, and Genni the young shifter are just a few that immediately spring to mind when thinking about the book. The main characters are Gallagher, the fear dearg/red cap who must kill regularly to keep his hat red and stay alive. Gallagher is deeply in love with Delilah whether he recognises the fact or verbalises it or not. The sexual act that one of the Savage Spectacle regulars had them perform has somewhat come between them. They would both rather forget how their child was conceived. So Delilah is pregnant and having some strange things going on around so what does this mean for her unborn child? Its not just a question of is it a boy or a girl, its is more what sort of cryptid, or human will it be and what will be its powers? With a red cap for a dad and a furiae for a mother.

In this book the points of view alternate between the time of the first reaping and the characters that were around at the time, as well as explaining surrogates and their part in the reaping. The confusion of how so many children were murdered by their very own parents who then deny any knowledge of the attacks. The other point of view is the present day, with those that escaped the Savage Spectacle trying to hide, survive whilst at the same time rescue their fellow imprisoned cryptids. This is where we learn why and how fate chose Delilah to be it's instrument. We learn that just one persons split second decision/choice can change the course of the lives surrounding them. The characters, both human and cryptid have come a long way and lots has happened since Metzgers Menagerie in bk1. This book, in fact the whole series is amazing and has an intricately detailed plot. This author seriously knows how to spin a fantastic story and keep you guessing what will happen right to the last pages.

There's love, loss, sacrifice, vengeance and heartbreak within this book's pages. The plot twists and turns for cryptids and humans alike keeping you on the edge of your seat wondering how everything will turn out. I highly recommend this whole series! I think I can honestly say that this book has a cryptid for everyone to fall in love with, for you to really root for their survival and dare to wish for them to have a happy ending.

I could go on and on forever praising this book and the rest of the books in the series. This the last book in the series has an epilogue at the very end which ties things up beautifully, in fact without it I would have been quite disappointed.
I have loved this series from beginning to end. There is sadness and sacrifice in this book but the loose ends are all certainly tied up. The ending was perhaps not one I would have chosen but upon reading it you realise it was the only plausible way this series could conclude.