REVIEW - FREEZING POINT - AFTER THE SHIFT BY GRACE HAMILTON 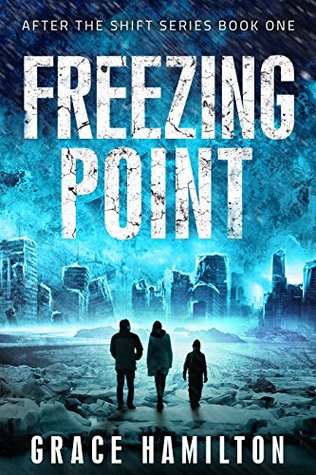 BLURB from Goodreads
In the dawn of a new Ice Age, families everywhere are taking to the road to escape the frigid landscape—but you can’t outrun the cold. No one could have predicted the terrifying impact of human interference in the Arctic. Shifts in the Earth's crust have led to catastrophe and now the North Pole is located in the mid-Atlantic, making much of the eastern United States an unlivable polar hellscape. Nathan Tolley is a talented mechanic who has watched his business dry up due to gas shortages following the drastic tectonic shifts. His wife Cyndi has diligently prepped food and supplies, but it’s not enough to get them through a never-ending winter. With an asthmatic young son and a new baby on the way, they’ll have to find a safe place they can call home or risk freezing to death in this harsh new world. When an old friend of Nathan’s tells him that Detroit has become a paradise, with greenhouses full of food and plenty of solar energy for everyone, it sounds like the perfect place to escape. But with dangerous conditions and roving gangs, getting there seems like an impossible dream. It also seems like their only choice.

REVIEW
I was ready for a dystopian or post apocalyptic read but wanted a more specific apocalyptic event.

The cover fits the descriptions in the book of the surroundings that are being travelled through very well. I'd say the three figures on the cover are Nathan, Cyndi & Tony, making the cover potentially be a scene from within the book. This cover would make me want to pick it up from a book store shelf to learn more about it.

The genres I have since listed for this book are General Fiction, Sci-Fi & Fantasy, which I agree with. I guess some would say some of the "violent" content should mean this should be categorised as an 18+ book, however in my opinion older teens/mature teens have probably seen more violence on TV then there is in the book.  In this book the "event" is a climatic change and everywhere is in a perpetual winter. I would add post apocalyptic, and possibly climate change to the genres list.

A drastic change in climate means that Nathan, Cyndi and the other characters in this book are living or rather trying to live and survive in a no end in sight harsh winter. This has meant many people in Glen Falls have already left to travel elsewhere hoping for a better climate or a new safer society rather than being open to the harsh elements and the violent gangs. Of course plenty of looting and rioting go on and the local, smaller, Police Stations and Hospitals are being closed down. People are abandoning homes and businesses that have been in their families for generations.

I already loved the first characters of Nathan, Cyndi & Tony within the first 12% of the book!  I like how even faced with a survival of the fittest scenario Nathan still upholds his morals. Will those very black or white morals end up hurting him and/or family? Or will he have to accept that shades of grey exist and he has to put himself and his families welfare and lives.

I totally understand how he wants to stay put in the place he has always lived and worked, a home and business that has been handed down through the generations of his family. The fact Cyndi is so good at prepping has probably allowed them to live a fairly comfortable life and stay put much longer than they maybe should have. I love the conversation where Nathan and Cyndi are talking about being prepared and Cyndi's prepping skills. Cyndi says "It's what prepping is all about. Think the unthinkable, and then plan for it"
It is a really difficult decision to make, both staying put and leaving have lists of pros and cons. Two of the main questions they have to ask themselves are, How isolated do you allow yourself to become in a world affected by climate change? Even with prepper knowledge and a decent amount of supplies when is the right time to leave?

A change for the worse regarding the health of his son Tony and the almost certain need his wife Cyndi will no doubt need have him reconsidering leaving though he is still procrastinating about the best idea of where to go and how to get there. Then a run in with a gang on Ski-Doo's and an attack on his home whilst he is out give him the finally push and convince Nathan they have to leave as soon as possible. Nathan & Cyndi with the help of their son Tony and Nathans workmate Freeson and the newbie to the group Syd.

Once the decision has been made to leave, the "how" is the next issue. As Tony is badly affected by the cold the family need to be mindful of his health issues and restrictions. Firstly they dig the quite elderly Airstream out of the snow and check it over. The idea being to hitch it up to the large wrecker that Nathan uses for work and because it is used to these harsh weather conditions.

I liked the character of Syd when Nathan first met her, when he couldn't tell if it was a male or female attempting to hitch a ride from him. I thought the way Syd's Malamute dog had to have a sniff around Nathan to see if he felt Nathan was trustworthy and honest enough to give them a ride. Saber, the malamute instantly licks Nathan's face meaning Syd first accepts a lift and then later agrees to go home with Nathan to his family.

I found the relationship between Nathan and Freeson amusing, one minute they could be arguing or strongly disagreeing yet they can instantly work together like being part of one machine when the need arises such as defending their travelling family group. These characters may start out as travelling companions but soon become more like an extended family.

There are two other characters that are featured twice in this book that I totally fell in love with, and yes, they even made me become misty eyed and shed a tear or two. They are a couple of older characters Marty and Betty who have been married years and are totally committed to each other until the end of whatever they may have to face. I adored how Betty was determined to stand fast and be at the side of her man Marty. The patience Betty has with Marty was truly amazing, the way she had accepted how things would likely end for herself and Marty.

There's certainly a lot going on in the book, we just get to know Nathan, Cyndi, Tony and Freeson, then Syd is added to the party. When they come across a limo parked haphazardly in the road. Syds instinct is to leave it and get by it as quickly as possibly. However Nathan still has the morals and manners that he insists on checking the vehicle. Then Lucy is added to the mix and makes a rather unlikely pairing with Freeson. Much later there is another addition, this time two 19 year olds who are into technology and have the equipment to access maps and communication. Everyone travelling within the group seem to bring their own skill set with them that is needed at some point during the journey to Detroit. Though Nathan's initial gut reaction was to stay put in Glenn Falls, then when the group are offered a place within an Amish community, he continues to make sure he gets his family to Detroit. The reason he has faith that Detroit is the "eden" they are looking for is the sparse communication he manages to have with his old friend Stryker. Once again Nathan ignores his gut when doubts Detroit is a "perfect" as Stryker is saying and showing it is. Theres only one way to find out and that is to go there. If its not suitable then they will have to travel further. It is important to Nathan that his son Tony and his wife Cyndi have access to a hospital should they need it.

My immediate thoughts upon finishing this book were it is well written, has great characters, and a very believable realistic plot.

To sum up this is the second book I have read by this author and I have thoroughly enjoyed both. The first book by Grace Hamilton that I have read and reviewed was Dark Retreat, book one of the EMP Lodge Series. I have also bought some more of the EMP Lodge Series, as well as purchasing Dead Lines: EMP Prepper Thriller which is book one of her 911 Series. So I guess this means I will be adding Grace Hamilton to my list of great authors that I wish to read more of. I will certainly be adding book two of the After the Shift series to my must read list.