REVIEW - SUFFRAGETTE THE BATTLE FOR EQUALITY BY DAVID ROBERTS 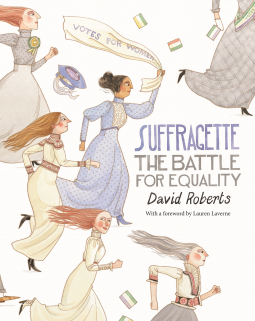 BLURB from Goodreads
2018 marks a century since the first women won the vote in the United Kingdom, and Suffragette tells the story of their fight. This is a tale of astounding bravery, ingenuity, and strength. David's conversational style is accessible and his artwork full of rich detail, bringing to life the many vivid characters of the Suffragette movement - from the militant activist Rosa May Billinghurst to the world-famous Emmeline Pankhurst. Covering the whole range of suffragette experiences - from aristocrats to the middle and working classes, as well as a look at the global struggle for universal suffrage, Suffragette is a fantastic introduction to a fascinating topic.

REVIEW
Both myself and my daughter love reading anything/everything Suffragette so as soon as I saw this book and I instantly wanted to read it.

The cover shows women suffragettes with their long hair freely blowing in the wind whilst they are running. The running women would be considered scandalous as women don't run, their hair should be tied back/up and most of all women should be dressed in a certain way to meet societies expectations.
I really love the book cover it depicts the kind of protests the women were prepared to make in order to get their voices heard. The illustrations of the women are so well done and I would say appeal to both children and adults.

The genres I have seen listed for this book are Non-Fiction, Adults & Children which do it the book well but I would also add history/historical too.

This book begins with a foreward/introduction by Lauren Laverne, radio DJ, she readily admits that her knowledge of the suffragettes was quite limited. The only suffragette she has knowledge of is the fictional character, Mrs Banks (Mary Poppins). Lauren thinks that Mrs Banks came across as a posh lady and she remembers her wearing a sash proclaiming her as a suffragette, and rushing off to meetings etc.
In reality some of the suffragettes were "posh" or perhaps a better way of saying it is that these were women "well to do" or had money.
The illustrations in this book may appear to be fun little illustrations, but they are not just caricatures. The suffragettes were very real people and I think that the illustrations in this book represent them and their cause at the time very well. As eventually the Suffragettes did win their battle for the right to vote, most people remember the suffragettes as winners, however they did not win the right to vote easily. There were many small battles that failed before they won the war! It was not an immediate, or quick win either. It was a slow, gradual or compromises to gain small wins.
The other thing Lauren, and I admit I remember about Mrs Banks (from Mary Poppins) is her badge. The real suffragettes had badges ad slogans such as "Votes For Women", "Deeds Not Words", "Dare To Be Free" which were also displayed on banners. There was also newspapers such as "The Suffragette", "Votes or Women" and "The Vote" anything to spread the world to the masses and attract them to join and fight the cause too.

The introduction by the author David Roberts explains how he was inspired to write this book. It was 1984 when David learnt about the Suffragettes. It was his school teacher who had strewn some books on a table ad given the class an end of year exam project to both write about and illustrate. It was a book about suffragettes that caught Davids attention. David was intrigued by the two women wearing prison uniforms on the front cover. David did his project and years later it was that project that he based this book on. David enjoyed creating illustrations from some of the stories he read about.


The book introduces the reader to the big names and the more controversial escapades in the suffragette movement such as, Mary Leigh hurling slates off a rooftop at the Prime Ministers car! Or Miss Spark & Miss Shaw barracading themselves in at the top of the Monument Tower in London in order to unfurl a masssive banner which read, "Death or Victory" and then showered the crowd below with pamphlets declaring "Votes For Women". The Suffragettes didn't always get treated well or welcomed. For example Muriel Matters was pelted with rotten fish when she gave speech.

Some of the laws around that time seem odd in our modern day, such as, when/[ if a woman married she had to promise to obey her husband!

Obviously the names you immediately associate with the suffragettes is "Pankhurst", I think most people will have heard those names and perhaps also

Mary Smith, from Yorkshire became the first woman to petition the government for the right to vote in 1832. Her argument was that women paid taxes to the government so they should be allowed to vote.

Nowadays the colour's most associated with the WSPU are the Green, White and Violet, some say these colour's are used as a code that means Give Women Votes. However this is said to not be the case. Apparently Green represents for "Hope", White "Purity" and the Purple/Violet represents "Dignity".

It's fair to say I have read other books about the suffragettes so already knew some of the stories, but I also read quite a few new ones too. I found the book captivating, factual, amusing at times and interesting all the way through. This book would be the ideal book for adults and children alike who have a love of history or would like something a little different to read to learn about the suffragettes ad their cause, as well as the different sections and groups of the suffragettes, from the totally peaceful section, to the militants who set fire to post boxes and threw stone through shop windows!

My immediate thoughts upon finishing this book were that it was as interesting, informative,and  beautifully illustrated book.

I feel I should add a small negative which was the copy of the book I read was a little disjointed in that sentences and paragraphs were sometimes placed in the wrong order. I would presume that is because the e-copy that I read was an arc, rather than a final finished e-book. I'd certainly love to see a physical edition of this book purely for the fantastic illustrations!

What more can I say I really enjoyed reading this book and thought the illustrations were brilliant and bought the whole book to life.
Emmeline Pankhurst died on the 14th June 1928 just weeks after the equal franchise act was made law. Meaning all women over the age of 21 were eligible to vote! The irony that Emmeline didn't live to see that day! It makes you wonder what the Pankhursts would have to say about our present world were there's the whole men getting paid more than women for doing exactly the same job. I reckon they would have had those banners back out along with organising more marches and demonstrations.