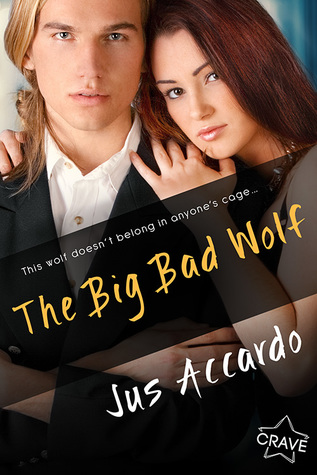 BLURB from Goodreads
Kensey Deaton comes from an elite werewolf lineage, but just because her family is royalty, doesn't mean she'll fall in line like some perfect little princess. She has plans and they don't include an arranged marriage!Slade McAlister has his own family drama. His Alpha father happens to be the most reviled wolf on the eastern seaboard, and it's a stigma he can't escape. So when his neighbor Kensey--the girl of his dreams and his nightmares--proposes a solution to solve *both* of their problems, he sees an opportunity he can’t ignore.Kensey and Slade aren't only from opposite sides of the tracks, they're from opposite sides of the war. But if they can sell their 'relationship', they might just make it out of this with their freedom.You know, as long as all that fake PDA doesn't turn into more...

REVIEW
I have read and adored other titles by Jus Accardo so her name drew me to this title and of course, the fact the book is published by Entangled is another plus point. The fact the genre is paranormal shifter, was the main attraction for me as I enjoy the pack politics and ancient rites and laws so I was hoping this one would be right up my street.

The cover has a couple on the front, a long blonde haired male in a suit and a long darker haired girl with her arm around the male and her head on his shoulder. This is a difficult one for me but I stand by always being honest and the truth is I really do not like this book cover. I guess it could be the two main characters, Slade and Kensey but to be totally honest, neither of the people on the cover are anything like I envision them to be from Jus Accardo's descriptions within the book.

The genres I have seen listed for this book and agree with are Teen, YA, Fantasy, Paranormal, and Romance. I would add that this book also has a contemporary feel to it as well. I think it will be a popular read that will appeal to a wide range of ages.

The basis of the book is two packs, the elite, wealthy and well respected Deatons and the McAlisters a more lowly or as some call them more low-life family of misfits. The Deatons and McAlisters live in close proximity to each other, in fact they have been next door neighbours for some time.

The two main characters of this book are Kensey Deaton and Slade McAlister, they used to happily play together in the wood surrounding their properties when they were younger. Then one time whilst they were in Kensey's tree house something happened and they stopped hanging out together.

Now both of them are older which means their families are putting pressure on them to claim a mate. Not all claimings are love matches some, in fact it seems most, are pairings arranged by two packs wanting to better their own pack's social position. So Alpha, Sam Deaton is putting pressure on his daughter saying she should look for a mate as if she doesn't choose someone herself he will choose for her. Kensey certainly doesn't want to think about the possibility of being paired with Carter Pennington the son of a man who has ingratiated himself into Sam Deaton's radar for possible matches for his daughter. Some packs arrange and force pairings against the free will of the female. Within a pack the males are considered to have all the power.

Living next door to Kensey, Slade is subject to a similar pressure to take a mate, though Slade has more of a hook up now and then, relationship with a pack member called Lupe. Lupe seems to be hoping for more of a future with Slade, where as he is happy as he is with the odd hook up. Slade has had a rough life with his father Gavin, who makes him do "jobs" for him and if he deosn't deliver well enough either he beats up Slade or his two enforcers Teegan and Mick beat up Slade on Gavin's orders.

Each pack has a special ability within them, such as the McAlister's have some sort of "mojo switch gift" which when in use makes the person they are working it on attracted to them and also makes it much easier for them to coerce them into doing whatever the McAlisters want! The Deaton's have the gift of fire within them, so to say Kensey is fiesty is an understatement! I would have loved to have known some of the other packs special gifts as well as how they could be used, to their pack's advantage.

Though Kensey comes from a wealthy pack her father and Alpha Sam wishes to arrange suitable males for her to choose from, though when she expresses that she would prefer to choose for herself he is fairly happy for her to choose someone for herself. Until she chooses Slade McAlister. Kensey talks Slade into pretending they are in a relationship together. Which he agrees to thinking he has nothing to loose and in return Kensey agrees to talk to her father about dissolving the trouble making McAlister pack which would set Slade free from his father and enable him to move away and start anew elsewhere. Kensey's father isn't so easily beaten and demands that Slade and Kensey have a formal courting.. . .Can the two former friends pull off this mutually beneficial pairing long enough?
I really loved the love/hate kind of relationship between Slade and Kensey. They had once been good friends, in fact once there had been a hint of them maybe being even more to each other. Both sides have to compromise with each other spending time with each others family/pack. It's not as easy as they thought it would be to fool everyone.

I loved the book and would have to say Jus Accardo is one my favourite authors. Her books flow so well, making them easy to relax with and read. Jus had me caring about what happened to both Kensey and Slade within reading a couple of chapters. I had inklings how things would perhaps end but that didn't spoil my reading and there were still a few surprises in store as the plot unfolded. There are some tender moments between father and daughter, as well as some tense scenes between father and son too. Gavin McAlister really enjoys provoking Slade and when he sees his son with Kensey, a possible mate he knows he has yet another way to get Slade to carry out his orders.

My immediate thoughts upon finishing this book were, that it was a great blend of paranormal shifters with a contemporary romance feel, I loved it. Didn't want to put this one down once I started reading it. It took just two reading sessions! This book could be the start of another potentially brilliant shifter series!

I really hated having to put this book down! Of course after just 26% of the way into the book I was already hoping for a happy ending for Slade & Kensey ..... maybe they could run off and start their own pack?! I had forgotten how addictive Jus Accardo books are!