REVIEW - THE ONE BY JOHN MARRS 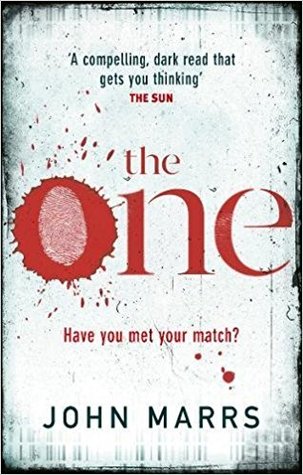 BLURB from Goodreads
How far would you go to find The One?A simple DNA test is all it takes. Just a quick mouth swab and soon you’ll be matched with your perfect partner—the one you’re genetically made for.That’s the promise made by Match Your DNA. A decade ago, the company announced that they had found the gene that pairs each of us with our soul mate. Since then, millions of people around the world have been matched. But the discovery has its downsides: test results have led to the breakup of countless relationships and upended the traditional ideas of dating, romance and love.Now five very different people have received the notification that they’ve been “Matched.” They’re each about to meet their one true love. But “happily ever after” isn’t guaranteed for everyone. Because even soul mates have secrets. And some are more shocking than others…

After reading the blurb for The One, I knew I had to read it. The whole idea of being able to find your "perfect match", your "perfect soul mate" by simply sending in a sample of your DNA had me thinking that with all the dating apps continually being brought out, exactly how far away can this scenario be?

I wasn't totally sure whether I liked the cover or not. I think the cover it has appeals to a general fiction and thriller audience but I think it maybe won't appeal as much to Sci-fi, and Dystopian readers. The title of the book that has the O in, which appears as a blood splat with a thumbprint in it, is a good representation of the killer in the book as well as being a subtle nod to the DNA needed for the Your DNA Match service. Everyone that has read my reviews know that I love a good byline and I really like the use of "Have you met your match?" as it can have more than one meaning which you will uncover as you read the book.

The genres I have seen listed for this book are Sci-Fi and Thriller which I agree with both those, though I would also add dystopian and futuristic too.

How can I describe this book? It's sort of one large story split into five different individual character's stories of what happens to them, their matches and the people around them when they use the "Match Your DNA" service. After watching TV programs such as Married At First Sight, Blind Date, and Take Me Out the type of app/service called Match Your DNA featured in this book, seems like a viable, and believable prospect in the not too distant future!

So, there are many different people that choose to be matched to their soul mate via the Match Your DNA service. I reckon most people would admit to having and withholding have a few secrets they don't reveal straight away when meeting new people or potential soul mates but wow! some of the characters in this book take "secrets' and withholding information to a whole new level!

As a reader we meet the five main characters that are the basis of the whole book. The five characters cover a whole range of people from diverse backgrounds and are using Match Your DNA service for their own individual reasons. But can an app really match you to your soulmate?

There's Mandy who desperately wants to have the fairy-tale wedding and family that her sisters appear to have, but she hasn't met her Mr Right yet. So she sees "Match Your DNA" as the ultimate answer. Mandy receives her matche's name and of course immediately checks him out on facebook. Mandy is quite literally drooling over Richard Taylor and cannot wait to meet him in person. Without giving too much away things don't really go as straight forward as she hoped. After a massive disappointment when she turns up to meet her DNA match. When another opportunity arises that may give Mandy part of her dream, as you'd expect she doesn't ask very many questions. Will Mandy's fantasy family be realised or in her effort to achieve her dream could she end up being taken advantage of by other members of the Taylor Family that she meets.

Christopher is another one of the people that uses the Match Your DNA service as he is socially awkward and only really knows what he should do, say and interact with people by reading books. Christopher receives the notification of his match as he sits looking around his latest victim's home! Christopher is a perfectionist, perhaps a little OCD. He plans his murder meticulously but soon becomes distracted by the thoughts of his perfect soul mate and who that could be. When he meets her and learns more about her it makes his secret killing even more of a thrill for him.

Jade has been messaging her match Kevin for quite a while whilst continuing to work what some would call a dead end job at a hotel near to her parents home with very few prospects. The job Jade had really wanted to do was in travel & tourism but after taking a temporary job at the hotel she had just never moved on. Though Jade had always kept her dream of wanting to travel but whilst her friends had gap years she was too busy working hard to pay off her student loan. It is her colleagues at the hotel that give her the final encouragement needed to take her fate in her own hands and buy herself a ticket on her credit card and turn up on the doorstep or rather at the farm where her true match lives and works in Australia. Once again Jade finds things are not always what they seem and has some tough decisions to make.

I won't go into detail on the other two characters as I think that would be going into too much detail and could spoil the individual reading experience. I did enjoy reading Nick's story, how he was supposedly so happy yet a doubt was put in his mind, by, in my opinion a kind of peer pressure so much he took the DNA Match test which caused him so many problems until fate took over. In Ellie's story once again everything seemed to be a fairy-tale but it just wasn't as it seemed. I adored the character of Andrei from Ellie's circle of friends/colleagues and wished he had featured more within her tale. Perhaps had she listened to him a little more things would have been different. To be honest I thought he would have been as near a perfect match for her as possible. I was surprised when Andrei just left before the "end" of Ellie's story. I didn't think that was something he would have done so easily.

I did love how the different characters had their own chapters. It also kept you hooked into the book as usually each chapter had a little bit of a cliffhanger too. There are lots of clues and a few red herrings as to what is happening to the individual characters within their own chapters. It really was like reading five different stories centered around the five main characters, but at the same time they all had the Your DNA Match in common and that theme was running through the whole book too.

My favourite characters were Jade, Kevin and his family, including his brother Mark, and their mother Susan. I love the way Jade follows her dream and even when she arrives to a situation nothing like the one she expected, she is determined to stay around even when it seems there can be no real happy ending for her and her true match.
I also enjoyed disliking Tim who deceives his perfect match Ellie. It's really quite ironic when it is revealed exactly who Ellie is.

What an interesting and amazingly different read. From the individual fascinating characters and their stories to the details and behind the scenes view of the Match Your DNA group. This book is like a jigsaw of individual tales that fit together to form part of a larger picture of peoples' ideologies on love and their one true match.