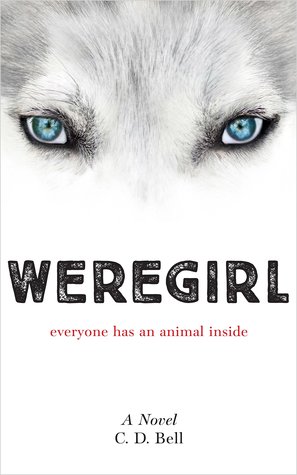 BLURB from Goodreads
Eager to escape her small hometown, high school junior Nessa Kurland is focused on winning a college scholarship for cross-country running. A chance encounter with a trapped wolf while out on a run leads to powerful and frightening changes, and one day, Nessa is transformed into a full werewolf. Now Nessa must navigate the challenges of high school while coming face to face with true human darkness, as she tries to make peace with her new wild nature.

REVIEW
I'd had this book on my kindle quite a while and had just not gotten around to reading it. I decided to look back on my kindle and checkout the titles that weren't so new. I fancied a shifter/werewolf genre read so with a title like Weregirl this one seemed the perfect choice!


The first thing I noticed about the cover were the beautiful piercing icy blue eyes of a wolf. Before reading the book I automatically presumed they would belong to the werewolf/girl that was also the simple straight to the point title of the book. The fur of the werewolf on the front cover is a luxurious looking white, silver grey. The byline on the cover say's "everyone has an animal inside" and after reading the book I can say is a quote from another mystical character we meet in the book who tries and I feel succeeds in being instrumental to Nessa accepting her gift.

The central character of this book is Nessa Kurland who lives with her hardworking single parent mother Vivian Kurland and her younger siblings, Delphine and Nate. Vivian works as a veterinarian technician at the local vets in Tether. The youngest in the family Nate has ADHD/Autism so has to be handled in a certain way to prevent him withdrawing completely into himself or having a meltdown. Structure and routine are extremely important to Nate. Delphine is the middle child, she loves fashion, clothes and is probably the most social of the siblings. Nessa is more reserved than Delphine and enjoys working weekends at the vet surgery her mum works at earning her own money to fund her running necessities, such as trainers etc. It's whilst Nessa is doing her running through the woods that she comes across a wolf stuck in a farmers trap. Nessa is an animal lover and has a good calming way with animals and she cannot just run by, unlike the other runner Cynthia that was supposed to be meeting with Nessa for them to run together. Cynthia hadn't waited and it was whilst attempting to catch up with her that Nessa found the injured wolf. Nessa approaches the animal carefully making sure it knows she is wanting to help. It's whilst freeing the trapped wolf that Nessa is attacked by a different wolf and is bitten. Nessa passes out and when she wakens she is in the health centre with Dr Kallish dressing her fairly large, painful wound. Dr Kallish asks about the wolves Nessa encountered and reassures her he has given her shots to counteract infection and the possibility of rabies, he even gives her the tooth that the wolf left behind in her hip when it bit her. Dr Kallish and Dr Raab work at the health centre where Nate and other children his age are being regularly monitored to check for any ill health that could be the result of the enviromental waste that a local company called Dutch Chem has illegally and irresponsibly dumped in the area.
Nessa heals much more rapidly than expected and is eager to abandon her crutches and get back to school and her running training with Coach Hoffman. Delphine, Nessa's younger sister takes the tooth to school and gets a hole drilled in the tooth to make into a necklace/talisman for her sister. Despite still being in pain from the bite, Nessa begins running faster times. It is good news as if Nessa is to get into college she will need a scholarship. Then things start to be a bit strange, her hearing becomes much more sensitive. One day whilst at her best friends studying, she hears a conversation between Bree and Gabe who are both downstairs whilst she is in the upstairs bathroom. Nessa's eyesight has also improved so much that she no longer needs her contact lenses. Nessa hides all these changes including the recurring nightmares she is still having about being attacked by the wolf. The final straw that finally makes her reach out for help is when she dreams that she is changing into the wolf. That's when a friends of Bree's rather hippy mum introduces Nessa to a local shaman who helps Nessa understand what is happening and how to deal with it.

I was immediately pulled in by the prologue, and wanted to learn more about the scientist featured in it called Camille Rogerson. Camille has been given a job on the team attempting to to clean up what Dutch Chem has left behind in the form of pollution. It's whilst working alone than Camille has an encounter with wolves. Then the book begins telling us Nessa's story. It was a shame we didn't revisit Camille and learn more about her work and her run in with the wolves. The genres I have seen this book labelled as are YA, Sci-Fi, Fantasy, Paranormal and Shifter, which all fit the book well.

I did really enjoy this book, its difficult to explain why on Goodreads I only gave the book 4/5 stars. The book felt a little slow in some places, though it is well worth sticking with and reading to the end. I enjoyed this book so much I read the second in the series that is called Chimera straight away. The cover of Chimera has me making all sorts of guesses and thoughts about what could happen next.

My immediate thoughts upon finishing reading this book were that I found this to be an interesting start to what could be a fantastic book series! Not sure how to explain it other than to compare it to two Book/TV adaptations and say it's more like the Teen-wolf TV series and YA aimed than the Bitten series adaptation from Kelley Armstrong's Women Of The Otherworld book series.

MORE IN THIS SERIES

In CHIMERA, the second installment in the Weregirl trilogy,
Nessa confronts the truth of who she is, where she comes from,
and what she has to do to survive. 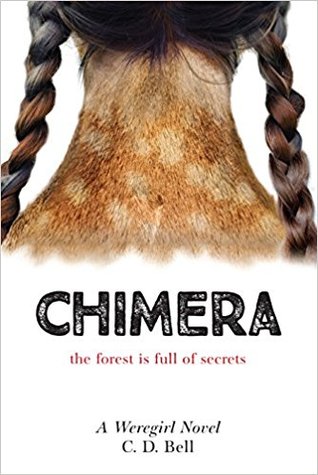 BLURB from Goodreads
The forest is full of secrets. Nessa Kurland is adjusting to life as a weregirl—she is transforming with ease and running with a pack she cares for deeply. Her boyfriend Luc is a fellow shifter, and Paravida, the corporation responsible for unethical genetic experiments on the residents of Tether, has pulled out of town, leaving the community safe. But that’s just how it appears on the surface. Nessa returns home from a run with the pack to find an FBI raid and the shocking news that her mother Vivian is being held without bail for violations so serious she may be facing life in prison. What did Nessa’s mother, a small-town vet tech, do to threaten Homeland Security? Vivian’s secret past leads Nessa to discover there is more to her own story than she ever imagined. The wolves that are running through Tether’s woods are not the same pack Nessa knew before. These are not all natural wolves. And they are breeding. Nessa’s transformation is only just beginning.