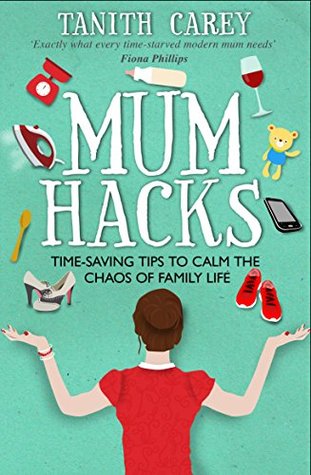 BLURB from Goodreads
Family life is pretty chaotic at the best of times and as any busy mum knows it can be an uphill battle to get out of the house in the morning let alone meet the demands of work deadlines. In her witty easy to read style, Tanith Carey encourages mums to banish the dream of becoming the ultimate supermum and brings them innovative, new ways to make life at home less chaotic and avoid meltdowns.With tried-and-tested advice for fellow working mums who feel like they are on the stopwatch from the moment they wake up, the book is a hands-on guide to fitting it all in, finding a routine and stressing less about the small stuff.

Find out how to:•Head off mess before it happens and choose toys which won't leave your home looking like a bomb-site•Throw together a nutritious school lunchbox – in just ONE minute•Get your children to do what you ask the FIRST time, not the twentieth•Dress your kids in less time and get out of the house quicker•Get your life back and yes, spend time with your partner

REVIEW
Every now and again I like to through a non fiction read into the mix of genres I am reading so I felt a little overdue and found this book and decided to give it a go. I mean I know my daughter is now 21 years old but we can all use a hack or too can't we?

The cover has a woman with her arms outstretched and she looks to be juggling various household items that represent chores such as scales for baking/cooking, an iron for the laundry,a teddy and a bottle to represent children and babies. So the items cover the multitude of chores a typical woman/wife/mother has to do on any and everyday of the week. The cover is in my opinion perfect for this book. The only things missing are the woman's sweating, exasperated face with steam literally coming out of her ears.

The book begins by stating that it is not only for mums that it is intended for anyone who is doing the caring, and needs some extra time saving ideas.
The author explains her life changed the day she traded her quaint little wooden chair for a not so pretty plastic version with a huge tray. The huge difference this fairly small change meant that no matter how hard her baby tried to throw food over the edge, as the new replacement had a wider tray, the baby couldn't manage to get the food beyond that tray. I though this was quite a good recommendation/hack.

Then the book began making recommendations on what the author thinks are the essentials such as a big freezer, a microwave, a dishwasher and so on. Then she goes on to suggest food stuffs to always have in the cupboard like rice, pasta and eggs.

The book then goes onto doing crafts with young children with the idea that if the weather is warm and dry enough to do the crafts outside and then just sweep/hose any mess away. If outside isn't an option the idea is to put down plenty of newspaper under everything and once finished the newspaper can just be crumpled up and thrown away.
Continuing on the children theme is a quite extensive range of substitute toys that can be easier to tidy away, such as swap flashcards for flip books, swap magnetic toys for fuzzyfelt, swap play-worlds for foldaway book versions, and finally swap board games (with lots of fiddly pieces for online versions.

There are lots of suggestions or rules to install to make your life easier and hopefully less frantic. Such as lay out clothes the night before they are needed, both for yourself and the children. To lead by example, such as when you come indoors you throw your jacket on a chair, your children will see that as acceptable because mummy/daddy does it.

The book was a quite interesting read, the changes are fairly achievable for anyone. They aren't necessarily expensive ones either they just require some forethought and organisation to put them into place.

I'll be totally honest some of the hacks were obvious and pretty common sense ones, such as putting the newspaper down before letting your children loose with the crafting. Also it's okay suggesting cooking meals for the whole week and freezing them, so long as you have the room in the freezer to store them all. I personally tried this one and just didn't have the room, and I already had the largest fridge freezer that would fit in my kitchen. I guess I enjoyed reading the book and it certainly brought some happy memories back to me of when my daughter used to bring multiple paintings home from nursery. To be totally honest i think the book is aimed at the younger, newer parent than myself. I would have been a little miffed I had bought this one for myself.

My immediate thoughts upon finishing the book were Lots of ideas for shortcuts some easier than others. Some easier said than done especially from my point of view as a mother who didn't have a supportive partner and then later became a single parent. Plenty of useful, possibly adaptable ideas.