REVIEW - MAY AT THE PEACOCK RANCH BY MICHELE MACHADO 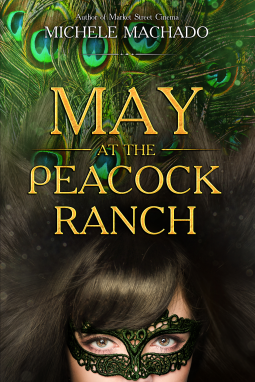 BLURB from Goodreads
With everything to lose and only one thing to wager… When May Victoria loses her mother, it's a race to get enough cash together to keep her young siblings out of foster care and in her custody. The odds are stacked against her, but she does hold a high card…Her virginity.The Peacock Ranch is a legal brothel on the outskirts of Las Vegas that's skilled in the business of virginity auctions—but whether or not May can survive the week with all but her chastity intact is a gamble she wasn't counting on.

REVIEW
it was the cover that initially drew my interest to this book and held it. When I read the blurb I worried that this book would end up being a full on erotica in genre. Then I noticed the New Adult label and thought maybe it will be steamy but still an enjoyable story to read too. I hate books that are just literally built around the sex scenes. So having said all that I did approach this book with a little trepidation.


The cover background is of beautiful vibrant peacock feathers, it also features a young females whose face partially hidden by a mask. I love the colour and suggestion of opulence that the peacock feathers create. As I said above it was the peacock feathers that first caught my attention. So I'd say who ever designed this cover has certainly delivered. I think this book in paperback faced out (cover facing forward rather than spine on)would really stand out on a book store shelf.

I felt immediately pulled into the book, which has a whole range of different emotional aspects to it from the upset and grief of May's mother dying, then there's the shock and worry when May learns the amount of money she needs to get hold of to keep the roof above her head and that of Logan and Sophie. May really does have a lot to deal with, the social worker who is supposed to help her seems determined to find fault with whatever May does. May is understandably depressed and feeling helpless wondering what she can do to raise the money she needs when one of her friends, Avery makes an "out there" suggestion in jest. One of her richer friends does try to help out where possible buying takeaways etc. It is also her friends that keep in touch with her via text whilst she is at the Peacock Ranch.

The main character and my favourite character in the book is called May Victoria MacLennan she is doing well at school. Chasing a full scholarship for college by using her skill as a pole vaulter. The heights she is jumping should mean the scholarship is a sure thing but then her home life drastically changes. Grace MacLennan, mother to 19 year old May, 14 year old Logan and 6 year old Sophie has been seriously ill for sometime. The heartbreaking news that the only care left available for Grace is hospice care is a hard blow to them all. Alice, Grace's hospice nurse calls in everyday to do what she can to keep Grace comfortable and offer a little help within her limited time slot to the MacLennan children.
Grace doesn't talk to her own mother though she has never stopped her children and mother speaking on the telephone as she believes they have a right to know their Nana even if they do not see her regularly as she lives in Scotland. Grace is in her own home with the three most important people in her life when she sadly passes. That moment changes life for all three of her children, though to her credit May attempts to take over the role of guardian and mother instantly. May even has to deal with the emotions of her mother boyfriends as he can't handle seeing Grace "like that". All the funeral arrangements are left to May to sort out, luckily hospice nurse Alice arrives and helps with those. May then has to deal with a social worker as apparently she has to prove herself organised and financially stable enough to have guardianship of Logan and Sophie. Of course May cannot cope with the thought of her younger siblings not being in her care, according to Kelly Branson, the social worker who comes to see May there's even the possibility of Logan and Sophie could be put into foster care. But fate hasn't finished dumping shocks and bad blows to the MacLennan family as May soon learns they are in mortgage arrears. It is just another difficulty that May has to find a way to deal with and fast. May has telephoned her Nana in Scotland and she immediately offered the option of them all moving over to Scotland to live with her but May thinks both she and her siblings have lost enough without losing what has always been their home and their friends in Las Vegas. May makes a difficult and large decision to go to the Peacock Range to earn money to give herself,Logan and Sophie a good start. Though things don't all go according to plan and May has to deal with a jealous, resentful and hostile fellow worker at the Peacock Ranch. I think that's about all I can say about the plot without, in my opinion telling you too much about the book.

My favourite character, I guess quite predictably, is the main character May. Although she knows her mother is ill, she does so well taking charge of the situation and caring for her younger siblings when her mom is no longer able to do so. I also like the way she stands up for herself when Misty Mayhem, one of the workers at the Peacock Ranch. May attempts to merely avoid Misty but when that becomes impossible she has to face the problem head on.
Naturally there are lots of women workers at the Peacock Ranch. Sandra runs the office/clerical side of business along with the money. The females were of different ethnicities, and character/personalities such as Umeko, who sounds oriental and is grumpy in the mornings but usually okay a little later in the day. The other character at the Peacock Ranch that May bonded with was the red headed super friendly Brandi. It is Sandra and Brandi that come to May's rescue later in the book.
The one character I felt I would immediately hate was Demitri, the man who pays for the only thing May has to sell, but in the end I ended up liking him too! Even though it is another older woman, Misty Mayhem from the Peacock Ranch that is jealous of May & Dimitri's transaction, she actually leaks it to the press in a bid to financially and publicly ruin May. It is a dire and serious situation as May needs her scholarship for her to continue her education, as well as appearing to be a responsible adult to be given legal care and guardianship for Logan and Sophie. The interference from Misty Mayhem means that May has to explain everything to her 14 year old brother who is angered and upset but eventually has to understand why May made the decision she did. How the book ended suggests to me that this is probably a standalone book, which is a shame as there are so many great characters within the workers at the Peacock Ranch.

I loved the writing style of this book and seriously did not want to put it down! I just wanted to read to the end. There was plenty of action going on, and the book does tackle a rather controversial subject very well when explaining how the Peacock Ranch and its workers are providing a service that is legal in the State of Nevada. It is quite detailed about the rules and regulations of the Peacock Ranch. I don't know what else to say as I really do not want to give away the whole story/plot of the book. It is a really amazing read! Loved it!