REVIEW - THE FIRST CITY - THE DOMINION TRILOGY BY JOE HART 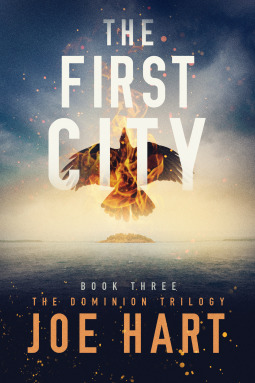 BLURB from Goodreads
Zoey has only ever known a world with few women and a society capable of unimaginable evil. Now she’s about to learn she may be the only hope it has for salvation.After she and her companions flee a vicious attack, barely escaping with their lives, Zoey finds herself faced with a new threat: video evidence suggesting she is the mother of an unborn baby girl—and the key to mankind’s survival. Knowing that her former captors will stop at nothing to control the power that lies within her, Zoey sets out on her own for the last American city, Seattle, in search of answers. But a new enemy awaits her there, and the truth she seeks may lead to her destruction as well as that of all humankind.This stunning finale, hailed by bestselling author Blake Crouch as a “rapturous, thought-provoking, [and] impossible-to-put-down thriller,” begs us all to consider what we would do when asked to choose between humanity’s survival—and our own.

REVIEW
I had been looking forward to reading this book from the moment I finished reading the previous one, The Final Trade. It ended on such a cliff hanger in many ways, and left me asking lots of questions. Such as, Will Zoey find out about her birth parents and her heritage? As well as the possible injuries the characters may have incurred during the fight at the end of the book too.
Having said that whilst I was looking forward to reading this book, knowing it is the last book in this brilliant trilogy is a bit of a downer. I'm not sure there can be a happy ending for the books characters but I do hope we get some of our reader questions answered before the end of the trilogy, or at least hinted at.

The cover of this book shows a phoenix rising through flames, so does that suggest that Zoey is going to rise above all her problems, or does the phoenix represent the world within this books series rising above the devastation of the Dearth and wastelands everyone is existing in. Can this world ever recover, can the few women left in the world be coaxed out of hiding, find a man they love and reproduce to repopulate this almost destroyed world.

This review is difficult to write without giving away large spoilers, I always try to give spoiler free reviews. It feels the better the book, and especially if its part of a series the harder the review is to write!

I would say this book, in fact, this whole series takes you on an emotional journey as the way it is written it encourages you to become attached to the characters within it. I was really shocked at the loss of one of what I considered a main character early within the book.
Initially the book begins with a flashback scene of Assistant Carter instructing Cleric Simon to accompany him to the nursery to meet his new ward, which is baby Zoey. Cleric Simon has to take along his own toddler son Lee as there is no one to leave him with. The scene is an emotional "feel good" one of the first meeting between the characters of Cleric Simon, his son Lee and Zoey. The only coldness within the scene comes from the clinical, rather robotic way Assistant Carter "introduces" them to Zoey. I truly loved the interaction between Lee and Zoey in this scene, as well as the proudness of his son and the immediate love Cleric Simon shows. After this flashback scene the The First City book then picks up right where action was left at the end of The Final Trade.

My "Final Thoughts" that I typed into Goodreads upon finishing the book were as follows. . .