​Monster Island is a Young Adult serial mystery thriller where the pages practically turn themselves. Readers who like LOST, Maze Runner, and Miss Peregrine’s Home for Peculiar Children will get lost in this action-packed thriller. The Mask is 18,000 words and part four of a serialized novel to be released in five parts over the course of two months.
For more information, please visit www.katiefrenchbooks.com. 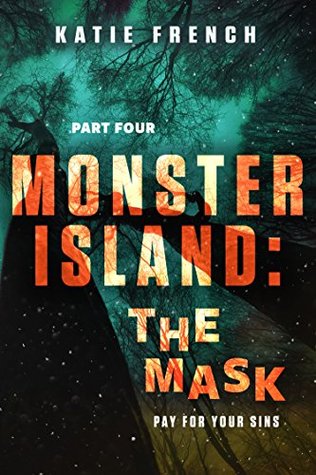 BLURB from Goodreads
My name is Jade Miller. Someone has kidnapped me and chained me in a dark basement. The torture is awful, but what's worse is this masked man's calculated kindness. To stop the beatings and gain my freedom, I must join him, but doing so will mean doing things for him. Terrible things.

REVIEW
As I approach reading this one I am hoping to have at least a few of my questions that I have from the other parts of this serialised novel answered. As a reader we still know very little about Dev and Jade. In fact I'm not entirely sure which side Jade is on after a couple of things she seems to have done quite willingly and easily.
As I read this book I enjoyed learning more about the character of Jade and her back story/life before the terror of the Island. I feel like I want to race on and read this really quickly. Though I wouldn't commit the flicking through pages to get to the answers as that only spoils the feeling of suspense and the trickle by trickle build up. I am still left with some old questions about Jade along with a few more I came up with reading this installment of the novel too. I didn't think it possible after reading Taken, The Noose, and Deep Down Dark but the Island and even some of the characters (who I will not name for fear of giving out too much information or spoilers) become creepier in part of the novel. This Island sure lives up to it's name of "Monster Island"!
The Cover is much along the lines of the other parts covers, though the writing, name of book  etc is in orange on this book. They fit well separately, I wonder if when all the parts are out, Katie will release them all together as a novel under an amalgamation of all the individual cover.
The genres I have said once reading the other part of Monster Island, have been horror, thriller, suspense, and dystopian. After reading this one I would probably drop the "dystopian" tag although in a way the plot does have genetic engineering within it. So I am still unsure about that tag. Maybe I would add "Genetics" or "Futuristic" or even "Sci-fi" to the genre list.
Once again this section of the five part novel is told from the points of view of the teens, including Lucca our ultimate main character, Jade, whom we haven't learnt a great seal about until this segment and of course Kat. Also new to us the reader, is a section from the point of view of Dev. I enjoyed Kat and Lucca being apart and the fact they parted on pretty bad terms doesn't stop either of them wondering how the other is doing.
Within this slice of the novel, it is revealed has had some survival type training from her father, so is much tougher than I had thought when first meeting her in the novel. Jade is also prepared to abide by a "survival of the fittest" ethic, and herself is her primary concern.
The name of the head of the "bad guys" aka "Project Mosaic" is revealed as Mr Hindenburg, I can tell you that little nugget without spoiling anything because it is what you find out about Mr Hindenburgh and Project Mosaic that is disclosed in this piece of the novel. Even when threatened with the "authorities" Mr Hindenburgh does not back down as he has the ultimate weapon to use against those disgruntled by his monster creations. . . .the very same weak point in all those people he employed to do all the genetic engineering for him.
The ending of the book is wow! I honestly didn't see that coming. I kinda just sighed and thought certain characters were finally somewhere, or on course to be somewhere safe and something happens that snatches it all away. . . and ends without enlightening as to if those character survive or perish.
I warmed up a little bit to Jade in this segment of Monster Island, but to say I like her character would be a little too generous at the moment. Joslyn played a larger part fighting for survival alongside sister Kat. . . . I'd say Joslyn is not as naive, or fragile as older sister Kat treats her. I liked the interactions between the sisters. Of course I am still the most fond of, who I would say is the main character, Lucca. Lucca remains the decent noble guy, trying to help everyone, constantly seeing the good qualities in everyone. Attempting to make a plan that will save them all and have them off this horror island once and for all.
A character I didn't like who we briefly met in one of the earlier parts of the novel was Vito, Lucca's father. My opinion prior to this book was that Vito was coming across as an absentee father to Lucca and husband to Lucca's mother. He seems to put himself before all others even in his son. Sadly this installment in the novel doesn't paint a better picture of Vito at all, he still comes across selfish and irresponsible.
My final words on Monster Island: The Mask would have to be "Wow, the end of this book really does leave you hanging! And to the author "Katie! How could you!".