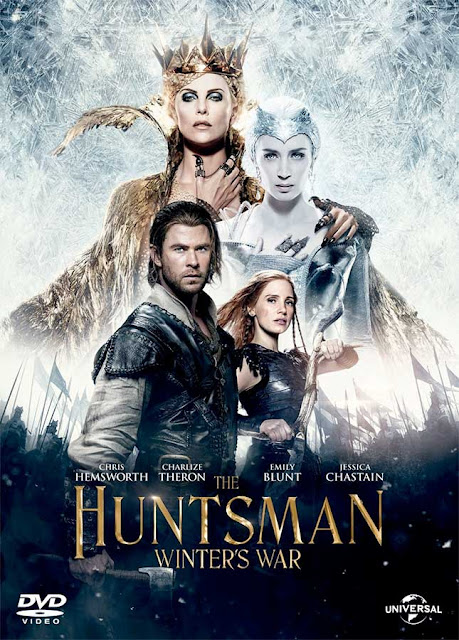 CAST
Eric the Huntsman - Chris Hemswoth - Been in: Neighbours & Ghostbusters 2016.
Queen Ravenna - Chalize Theron -Been in: Italian Job & Snow White & the Huntsman.
Freya (Queen's sister) - Emily Blunt - Been in: Devil Wears Prada & Queen Victoria.
Sara the Huntsman -Jessica Chastain - Been in: Interstella & The Help.
Nion - Nick Frost - Been in: Shaun Of The Dead.
Gruff - Rob Brydon - Been in: Gavin & Stacey & voice over in The Gruffalo.
Doreena - Alexandra Roach - Been in:Being Human & Testament Of Youth
Bronwyn - Sheridan Smith - Been in: Two Pints Of Lager & A Packet Of Crisps & Mrs Biggs
Andrew - Colin Morgan - Been in: Merlin, Humans & the Living and The Dead.

INITIAL THOUGHTS
Not sure what to expect from this one really. I have heard it is a prequel to another film called Snow-white & The Huntsman which I'd like to watch. So it makes sense to watch this one first.

COVER
This cover is dominated by the pictures of four main characters, Queen Ravenna, her younger sister Freya, and the two Huntsman Eric and Sara. Also featured in the background on the cover are shards of glass and what looks to be a mounted army in the bottom left hand corner.

REVIEW
I purchased this on from Amazon UK. So once I began watching this one I began thinking certain parts seemed familiar but weren't from Snow white as I had expected. By the time I got to the end of the videa I realised that this was a mish-mash of parts of Snow-white written by The Brothers Grimm and the other parts were from Han Christian Andersons Snow Queen, which I has in book form as a youngster and had always loved the story.

So the main gist of the story is that Eric is tasked with retrieving the famous Mirror. Along the way we learn more about Eric, how as a child he was kidnapped and trained to become a Hunstman. Whilst training Eric falls in love with the female Huntsman Sara who is also traning. When they are found out they are separated "forever" so that's the romance part of the dvd, because of course Sara and Eric meet up on the search for the Mirror and end up on another more personal quest of does love still exist between Eric and Sara? I think Chris Hemsworth as Eric and Jessica Chastain as Sara make a believable couple. I like the fact Sara is allowed to be as "kick-butt" as Eric, in fact at some points she looks and performs as a Huntsman even better than Eric. She proves on many occasions that she "never misses her target". 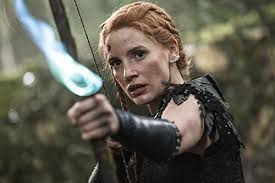 The other character's the pair meet up with are what I'd describe as a couple of "double acts". There's a couple of male dwarve's, Nion & Gruff, and a couple of female dwarve's called Doreena & Bronwyn. The two sets of dwarve's end up having their own "love stories" which is quite funny and cute.  I think Charlize Theron is perfect casting as she is very believable as Queen Ravenna.
Does love survive? with any of the couples? Will love conquer all? Can the unlikely group of friends get the Mirror? Does good overcome evil? well you'll have to watch it to find out!
I fell I should mention that there is "bad language" within the DVD used by Bronwyn which in my opnion could have easily been left out with no detriment to the plot or characters at all. I suppose that's partly why the DVD is rated a 12.
I did enjoy the DVD, I think it will probably make even more sense and become more relevant when I get around to watching Snow White & The Huntsman.

FINAL THOUGHTS
Yes, I enjoyed the DVD and I guess it will appeal to those who love fairy-tale re-tellings. It has also made me interested in watching the next film/films to see how much of The Snow Queen by Hans Christian Anderson will feature in it.