Transition is the third book of the Euphoria Z Series
set in a post-apocalyptic California. 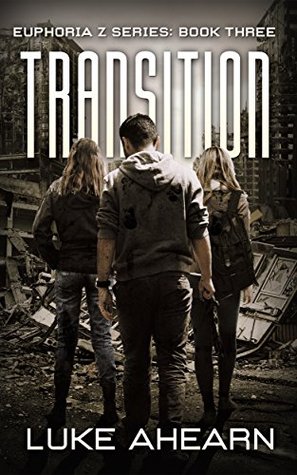 BLURB supplied by Bewitching Blog Tours
The post-apocalyptic world is in transition. While things may seem safer, a great danger lurks under the surface and sometimes from above. What does the Island have to do with the state of the world, and the invisible creatures? New threats arise and evil is tracked down. Will this finally be the end for Ben and his psychopathic lifestyle? Continue the adventure as we find out what happened to Cooper, Lisa and the others 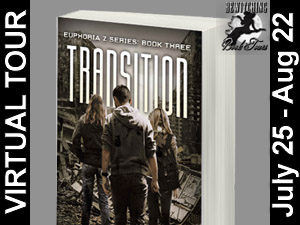 It doesn’t rain frequently in San Jose, California and when it does it’s a quick gray affair that rinses away dust and freshens the air. Every few years there’s a day or two of torrential downpours, interspersed by widespread drizzling and dripping. And rarely, as was the case this day, the skies opened and dumped a decade’s worth of rain upon the city in only a few days. These rare downpours could last days and do substantial damage citywide.

The downpour was so heavy it was impossible to see farther than a few hundred yards. Water ran from the highest spots in the city and merged into thick fast flowing rivers on its journey downhill. It gushed down streets, blasting over curbs and past sign posts, taking away anything that wasn’t nailed down. The waters were black with months of accumulated filth and foamed with the runoff of a million miles of city streets. The fine dust of millions of corpses, that which wasn’t already blown away by the winds, was swept into storm drains and out to the Pacific Ocean.

But the most alarming aspect of the rainstorm by far was the thunder and the lightning. Every few minutes great jagged bolts of light arced across the sky, illuminating the world in blinding flashes, followed moments later by the thunder, a terrifying sound as if the heavens were being torn open. Then cascading booms shook the earth for long moments after.

One of these giant flashes illuminated the inside of a dark warehouse revealing a world of crisp black shadows and harsh blinding whites. For a split second a human shape was visible laying atop a large worktable. It resembled the sarcophagus of a long dead pharaoh. Puddles of odd liquids had collected under the body and run off the edge, hardening in long stalactites of black and dark red. A minor flash revealed a hardened shell, mottled with the same black and reddish hues. The long low rumble of the distant thunder that followed caused an eye to twitch. A loud crack and a blinding flash of light caused both eyes to open wide in shock and fear. A high-pitched keening could be heard emanating from the misshapen body on the table.
Slowly a hand rose, the cracking of dried viscera was faint but clearly audible above the muted pounding of rain. The open eyes, clear and green, regarded a grotesque hand armored in a red and black crust. The arm dropped and the eyes closed. The thrumming of the rain and intense fatigue made slipping back into the sweet darkness of sleep all too easy.

Later, a blinding flash of light and the ensuing crack of thunder caused the figure to startle awake. Fat drops of water fell almost forty feet from the compromised skylights above creating a loud rhythmic clunk, clunk, clunk as they struck a crustaceous shell. There was a hiss as breath was sucked inwards through thin reddish tubes that hung over a tiny mouth. The creature spasmed at the discomfort as air filled its long dormant lungs.

The figure rolled awkwardly left and right as it attempted to stand. Dried viscera cracked and crunched and fell away in large chunks. It stopped to rest a few times until eventually, with great effort, it rolled on its stomach and swung its legs off the table, pushing itself to a standing position in a sort of diagonal pushup. It struggled to stay upright as it took one awkward step forward, then another.
The heavy armored shell made walking difficult and uncomfortable. Each labored movement caused the figure to hiss and gasp. It took three steps and bent forward over the table to rest. The effort was exhausting and the armored plates tugged at odd spots and pinched and pulled on the raw skin beneath.
Many laborious steps later and the creature was nearing the door to the warehouse. The effort was exhausting, the movement unnatural, and feelings of weakness and nausea were overwhelming. But a sense of urgency drove the creature forward. It knew that it must get out of that dark place. There was somewhere it had to be.

The warehouse door swung open and wind blasted cold rain across the armored body, but it felt nothing. It looked down, apparently just now gaining a sense of awareness beyond wakefulness and the desire to escape the dark building. Groggily it tugged on a section of armored shell as if it was just now noticing it. The skin beneath pulled, the shell seemed to be attached to flesh like that of a lobster or crab. A disfigured hand rose up, lightning flashed and a gasp of horror came from the bulbous armored head as it looked with revulsion at its own red and black armored appendage.

The creature looked to the sky and stepped into the torrential downpour. It shuddered as icy rain made its way beneath its armored plates. A shell loosened from a forearm and with a touch clattered to the ground. The rainwater stung like fire and the figure backed into the warehouse staring at raw skin glistening with red wetness. The unprotected skin was as sensitive as that of a newborn babe. The arm went back into the rain and recoiled again as if the rain water was scalding. It tried again and again until it could stand the pounding rain.

Eventually it stepped out into the deluge and disappeared into the blinding storm.


Lisa barely remembered her own name when she awoke, but now it was all coming back to her as she shuffled along in the downpour and she grew more and more terrified. She had no idea what had happened to her or what was happening to her presently. She remembered hiding in the safe room and later talking to the creature. Another piece of her exoskeleton fell away and she shivered as cold rain pounded her left shoulder. It didn’t hurt as bad as the first time rain hit her flesh. She almost tripped when most of the shell on her right leg fell away all at once. It was as if she were molting like a crab. She was sick, weak, and terrified. She had no idea what had happened to her but everything about her body felt different and weird. 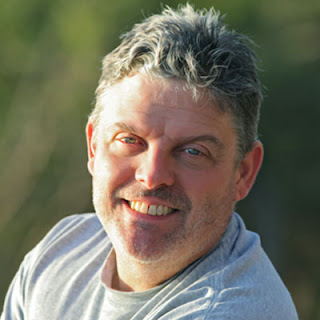 Luke Ahearn was born in New Orleans, LA and now lives in Central California. He is a successfully published author of both fiction and nonfiction, most recently completing Transition, the third book in the Euphoria Z Series. He has over 20 years of professional game development experience in lead positions; designer, producer, and art director.

Luke is also a book cover designer interested in supporting his fellow authors. He hates writing about himself in the third person, but thinks it makes him sound more substantial.

Euphoria Z is the first book in this fantastic sounding series! 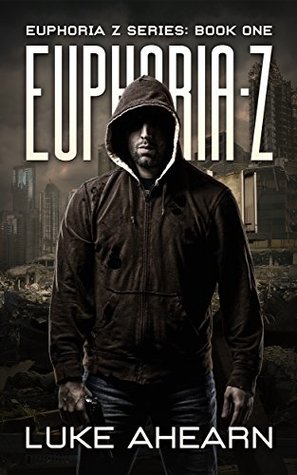 BLURB supplied by Bewitching Blog Tours
Civilization shuts down as the world’s population fills the streets in a deadly orgy. They feel only pleasure and never pain, even as they are injured, maimed, and mutilated. The few who remain unaffected struggle to survive, unaware that things are about to get unbelievably worse. Cooper is among the few survivors of an apocalypse that is a result of a conspiracy to depopulate the world. One week ago, college was his biggest concern. Now he is on a perilous journey to find his sister. But zombie attacks aren't the only threat he faces. In this nightmarish reality, the living can be far more dangerous in this new dystopia.


Transformation is the exciting second book in the Euphoria Z Trilogy. 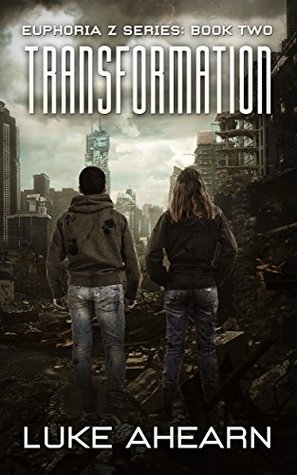 
Cooper has found his sister Ellen and her boyfriend Taffer who survived the infection. But there's something not quite right about him now. Cooper must leave Ellen and Taffer behind with a new companion to go on a critical mission to find the one person that might be able to help him. Weed, the surviving member of the Wild Rebels MC has infiltrated the parking garage as a harmless old man, but he's not fooling everyone. The dead now change in unforeseeable ways that threaten the scant remains of mankind. A host of characters new and old fill the pages of Transformation. Some we thought we saw the last of and some we wish we never crossed paths with. The only thing that is certain….time for mankind is running out.