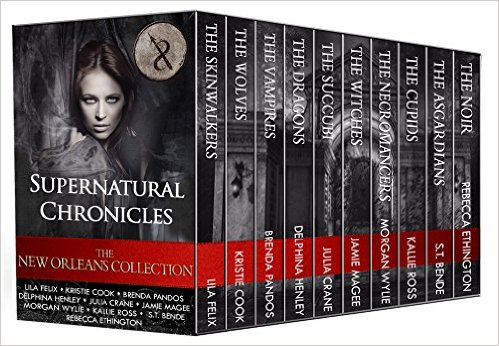 Ten authors and one grand scheme of mayhem and magic in the depths of New Orleans. 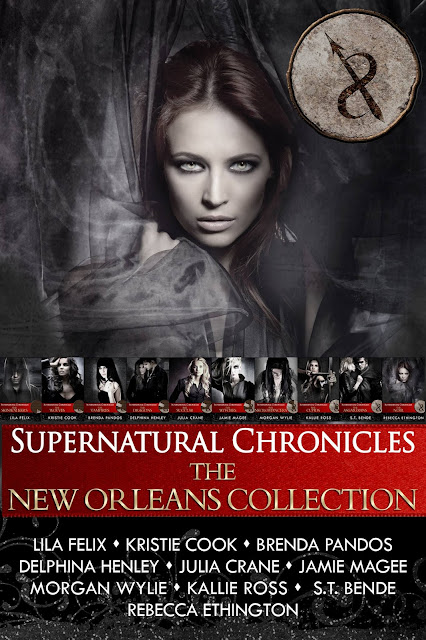 About The Supernatural Chronicles:
The New Orleans Collection

Beneath the brow of Bourbon and French architecture, the iris of New Orleans swirls with flecks of worlds and beings unknown to mankind. Come with us as we chronicle their journey—each supernatural race must hunt for an offering in hopes of saving their own. Skinwalkers, Wolves, Vampires, Dragons, Succubi, Witches, Necromancers, Cupids, and Asgardians are all in danger of losing control as an uprising darkness threatens to rip the veil that protects them all from the great beyond. 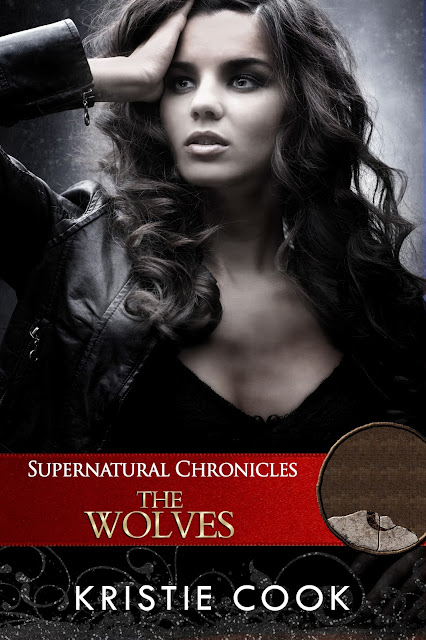 For far too long, Sundae Grayson has lived under the tight control of her father and the wolf pack he leads. At twenty-two and with college degree in hand, she’s ready to embark on a journey of her own. But when her father is attacked and nearly killed, she finds a cryptic note in his pocket—a riddle she must solve to save him. Doing so means delaying the life she desires, but her father is worth it. Not to mention that if he dies, she becomes alpha, and she’s so not ready for that. Thank the Angels for Trevor, leader of his own pack and her lifelong crush, who volunteers to help her.


The riddle sends them on the hunt of their lives. After all, they must solve the mystery, find the relic they need, and deliver it on time to save not only their packs, but all of the Amadis, who serve as the Angels’ army on Earth. If they fail, the Demons will win over the world. But what must be sacrificed for the sake of the greater good?


This novella takes place in the internationally bestselling Soul Savers series by Kristie Cook, so be prepared to see some favorite characters. The story's timeline falls between Promise, Book 1, and Purpose, Book 2.

If you’re new to the Soul Savers series, discover the rest, where you'll meet more than werewolves, but also vampires, witches, and warlocks. The further you get into the series, the more creatures you'll discover, including shapeshifters, fae, sorcerers, angels, and demons.

***NOTE: This is a paranormal series that crosses from New Adult to Adult. It contains mature content meant for 16 years and older. 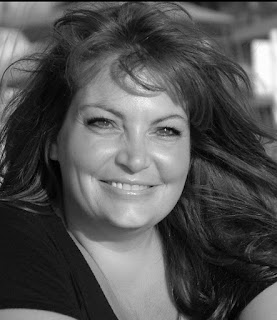 She has also written The Book of Phoenix trilogy, a New Adult paranormal romance series that includes The Space Between, The Space Beyond, and The Space Within. The full trilogy is available now.

Besides writing, Kristie enjoys reading, cooking, traveling, and riding on the back of a motorcycle. She has lived in ten states, but currently calls Southwest Florida home with her husband, a beagle, and a puggle, but spends many weekends with her three sons at UCF, cheering on the Knights.

S.T. Bende: Today I'm so excited to introduce you to one of my very favorite authors. Kristie Cook writes urban fantasies that will leave you breathless. Her Book of Phoenix series offers a beautiful glimpse into just how far a soul will go to be reunited with its other half. And her Soul Savers series has captured the imagination of readers the world over, bringing to life the story of the ultimate warrior and the fierce protector. Kristie has inspired me in every possible way--as an author, a storyteller, a business woman, and as a friend. And now I want to know what inspires HER!

ST: Kristie Cook, you inspire me in every possible way -- as an author, a storyteller, a business woman, and a friend. I want to know what inspires YOU! What initially inspired you to sit down and write your very first book? (And what was that book? Was it Soul Savers or were there earlier stories??)
KC: I really started with character sketches, and they grew into a story, which grew into a series. A Demon’s Promise (originally titled Promise) was the first book I wrote that not only had a beginning, middle, and end, but that I still loved enough when I finished the first draft to want to keep working on and improving. I’d written fiction when I was younger, but I’d never been able to finish my stories, or when I did, I was done with them. Once I knew what happened, I lost interest in taking it further. Not only did I finish A Demon’s Promise, but I had solid ideas for the entire series. I haven’t looked back since.

ST: What inspired the characters of Sundae and Trevor from Supernatural Chronicles: The Wolves?
KC: Sundae and Trevor are minor characters in my Soul Savers series. They show up a few times in a couple of books and Sundae’s pack is featured in a couple of the short stories in Wonder: A Soul Savers Collection of Holiday Short Stories & Recipes. Sundae is somewhat young, and obviously female, yet a pack leader and alpha of one of the oldest and largest packs in my world. The Supernatural Chronicles project gave me the perfect opportunity to explore her story and how she became leader. I hadn’t planned it, but discovered that her path to leadership was kind of similar to Alexis’s in the main series. I’m glad I chose these two for the Dynamis project, because I had a lot of fun getting to know them better and writing their story. I’ve fallen in love with Sundae and see Trevor in a whole different way now.

ST: You traveled across the United States in a super amazing camper this summer (I saw the picture! It was EPIC!), gathering inspiration for the next chapters of your stories. Did anything events/people/places you came across on that trip make their way into The Wolves?
KC: We made two stops in New Orleans – one in May, before Supernatural Chronicles was even an idea and one in September, specifically to research the cemetery for the story. The first trip did inspire some character ideas – trust me, the French Quarter has no end for character ideas. But visiting the cemetery and doing a tour really helped me place the story there. The history is amazing and you can’t help but be inspired by the City of the Dead.

ST: Who are the most inspirational figures in YOUR life?
KC: My kids. They’ve always kept me on my toes to be the best I could be for them. Now that they’re older and becoming young men with their own hopes and dreams, I’m so inspired to continue reaching for mine. And their experiences and some of the things they say – great fodder for my books. Lol

ST: Trevor. Yum. Thanks for him. :) In the Hollywood Drive Thru Window of casting, who inspires you enough to invite to a casting for the roles of (a) Trevor's spectacular face (b) Trevor's glorious hair (c) Trevors divine nekkid torso (d) Trevors drool-worthy arms (e) Trevors Alpha Male personality?
KC: Hmm…probably Josh Brolin for face and hair, Joe Manganiello for torso and arms, and Alexander Skarsgard/Eric Northman for alpha male personality. I know you like that, S.T. *wink wink*

ST: Takk, Kristie, for inspiring me beyond words . . . and for giving us ANOTHER hunky male to dream about! We love you!
KC: Thank you for having me! I hope you all enjoyed it. ☺ 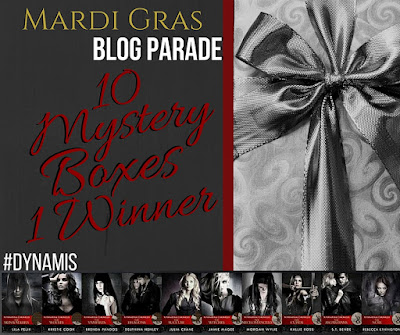