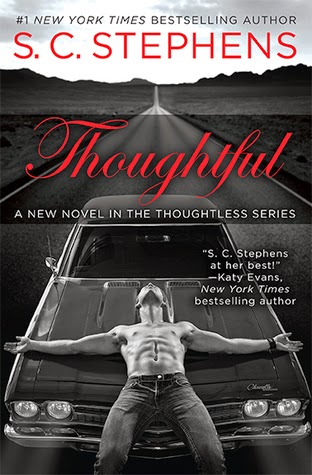 BLURB from Goodreads
Every story has two sides, and in this new book, the epic love story between Kiera and Kellan is shown through his eyes. All Kellan Kyle needs is his guitar, and some clean sheets of paper. Growing up in a house that was far from a home, he learned a hard lesson:You're worthless. Now his life is comfortably filled with passionate music, loyal band mates, and fast women...until he meets her. Kiera makes him ache for more. Makes him feel for the first time that he'sworth more. But there's one problem - she's his best friend's girl. Just when Kellan thought his emotional defenses were rock solid, Kiera's indecisive heart wreaks havoc on his soul, changing him forever. Losing Kiera is not an option.

INITIAL THOUGHTS
As the new year was approaching I had decided to try and read some titles that were a little out of my usual comfort zone. So when I was asked to read and review this title as part of the blog tour I decided to give it a go. I'm not totally sure what to expect, other than this book is the same as Bk#1 only from a different point of view.

REVIEW
I received a free e-copy of this via Clara, in exchange for my honest review and posting the review during the blog tour. The cover features a man laid across a car bonnet, which is from a scene within the book. The cover is in black and white other than the book title and the authors name. Would the cover make me pick this book up in a book store? Being totally truthful, I don't know. I mean being on a shelf with colourful covers it may stand out as being different. I guess I'd pick it up to read the blurb.
As I have said earlier, Thoughtful Bk#1.5 is basically the same plot as Thoughtless which is Bk1 of the Thoughtless Series but told from the point of view of Kellan Kyle.
Kellan didn't have a very good childhood in fact it's fair to say he was beaten up for the majority of the year he spent living at home with his parents. Kellan was a "mistake", his mother cheated on the man she was married to, which was possibly the reason Kellan never felt welcome at home, he was a constant reminder of infidelity. The only break in Kellan's daily beatings and verbal abuse was when his parents decided it would "look good" if they took in a foreign exchange pupil. That pupil was Denny. Whilst Denny was around Kellan's parents tried to be careful, though during one heated exchange, Denny ends up being caught in the crossfire and taking a punch from Kellan's dad. This incident stops Kellan's daily beatings. . . However they soon start up again when Denny returns home. Kellan and Denny became close firm friends in fact they end up with an almost brother like relationship. So when Denny telephones Kellan years later when he has been offered a new job and needs a place for himself and his girlfriend to stay. Kellan immediately suggests they both stay with him. Denny and his girlfriend arrive at Kellan's home. The home that his parents left him, that didn't even have a childhood photograph or any of Kellan's childhood possessions in it.
There is an immediately sizzle of chemistry between Denny's girlfriend Kiera and Kellan. When Denny has to travel due to his work, he gives a friendly warning to leave his girlfriend alone. Kellan does have a reputation of being a womaniser which totally fits with being the lead singer/guitarist of the "D Bags". The band consists of Kellan and Evan who usually write the lyrics and music, they are the two original members. Then Matt who takes the bands booking. The last member of the band who really lives up to his "Douche-Bags" name is Griffin. Griffin and Kellan are the guys who constantly "hook up" with "D-Bag" Fans. Griffin is the guy that continually brags about his conquests and thinks it is some sort of competition.
Circumstances keep throwing Kellan and Kiera together. In short they go from friends, to just friendly flirting, to flirting and acting on it, back to just friendly flirting. Obviously Denny finds out but who does Kiera choose, and when she does make the choice will either of the guys in question still want a relationship with her?
The book is well written and the author makes it so you, the reader, really can't help but to fall for Kellan a little, even though he cheats with his best friend's girl. It's quite a sad, how Kellan falls in love so easily with Kiera as she shows him, acceptance, love and kindness, the very things that his parents never gave him. After continually being told he was/is worthless Kellan has chosen to believe it. That is another reason why Kellan has only ever had one night stand meaningless sex.  I do feel he becomes a little too gullible around Kiera though, who in my opinion isn't as sweet and innocent as she is depicted.
I do like the closeness and banter between the band members. The whole business of they can turn up on each other doorsteps any time day or night and be welcomed in. I enjoyed the insight into Kellan's writing from the heart process. I adored the guitar pendant and the reasoning behind it. The pace of the book was a tad slow for me I was at time thinking come on get on with it.
So did I enjoy the book? Yes, though at times I felt frustrated with the characters. At more than one point I felt like grabbing Kiera and shaking her whilst screaming "just choose now!"   I felt that Kiera was leading Kellan on a lot of the time whilst she continued on in her own little perfect world with two men hanging on her every word and action.                             Would I recommend the book? If you like romance with a little steam and sizzle then this is for you. I think it is New Adult/Adult aimed because of language used and content.
Would I want to read the next book in the series? I'd like to catch up with Kellan, Kiera and Denny, I also have a feeling that the whole fidelity issue surrounding Kiera will be a part of the next book. Hey there's a saying "once a cheat, always a cheat"
Would I read other titles by S.C. Stephens? I would certainly check other titles out by S.C. Stephens as I did enjoy her writing style. 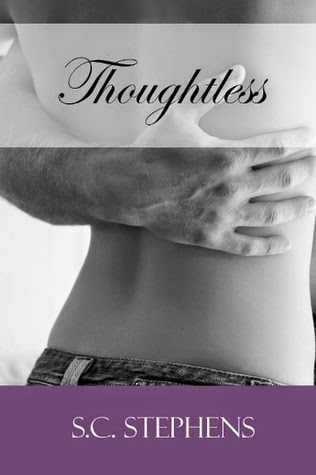 BLURB from Goodreads
For almost two years now, Kiera's boyfriend, Denny, has been everything she's ever wanted: loving, tender and endlessly devoted to her. When they head off to a new city to start their lives together, Denny at his dream job and Kiera at a top-notch university, everything seems perfect. Then an unforeseen obligation forces the happy couple apart.Feeling lonely, confused, and in need of comfort, Kiera turns to an unexpected source—a local rock star named Kellan Kyle. At first, he's purely a friend that she can lean on, but as her loneliness grows, so does their relationship. And then one night everything changes...and none of them will ever be the same. 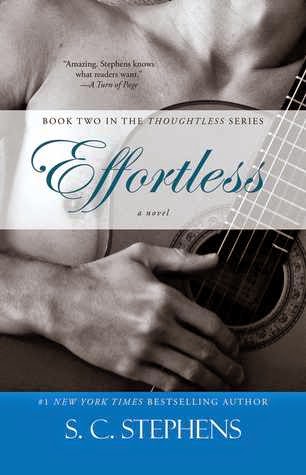 BLURB from Goodreads
After being caught in the middle of a love triangle that led to a devastating betrayal, Kiera pledged to learn from the mistakes she&#8217;d made. She was determined to never again inflict that kind of pain on anyone, especially the soulful, talented man who held her heart. But life offers new challenges for every relationship, and when Kiera's love is put to the ultimate test, will it survive? Love is easy, trust is hard. 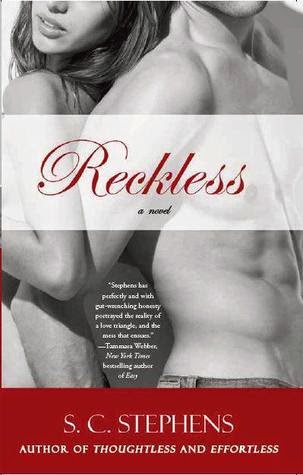 BLURB from Goodreads
Can love survive when life gets Reckless?When the band hits it big, Kiera and Kellan must ask themselves: Can their love for each other survive the constant pressures of superstardom? The friendships they've formed, the new family they've found, and the history they've forged will all play a part in helping them navigate the turbulent waters of the band's exploding popularity. A greedy executive hell-bent on success, a declining pop star looking for an edge, and a media circus that twists lies into truths are just some of the obstacles the lovers will have to overcome if they are going to remain together. Fame comes with a price-but will it cost Kiera and Kellan everything?

S.C. Stephens is a New York Times and USA Today bestselling author who enjoys spending every free moment she has creating stories that are packed with emotion and heavy on romance. Her debut novel, Thoughtless, an angst-filled love triangle charged with insurmountable passion and the unforgettable Kellan Kyle, took the literary world by storm. Amazed and surprised by the response to the release of Thoughtless in 2009, more stories were quick to follow. Stephens has been writing nonstop ever since.In addition to writing, Stephens enjoys spending lazy afternoons in the sun reading fabulous novels, loading up her iPod with writer's block reducing music, heading out to the movies, and spending quality time with her friends and family. She currently resides in the beautiful Pacific Northwest with her two equally beautiful children.


REST OF THE TOUR 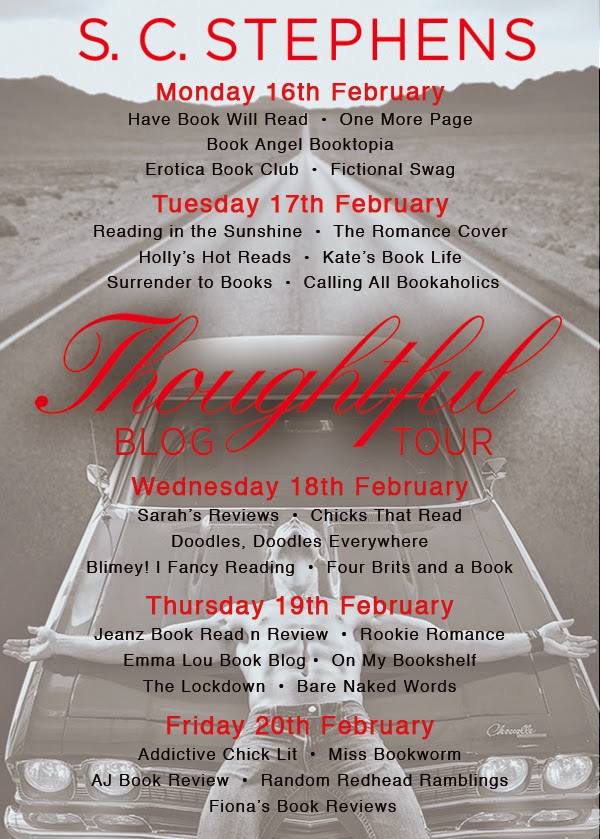 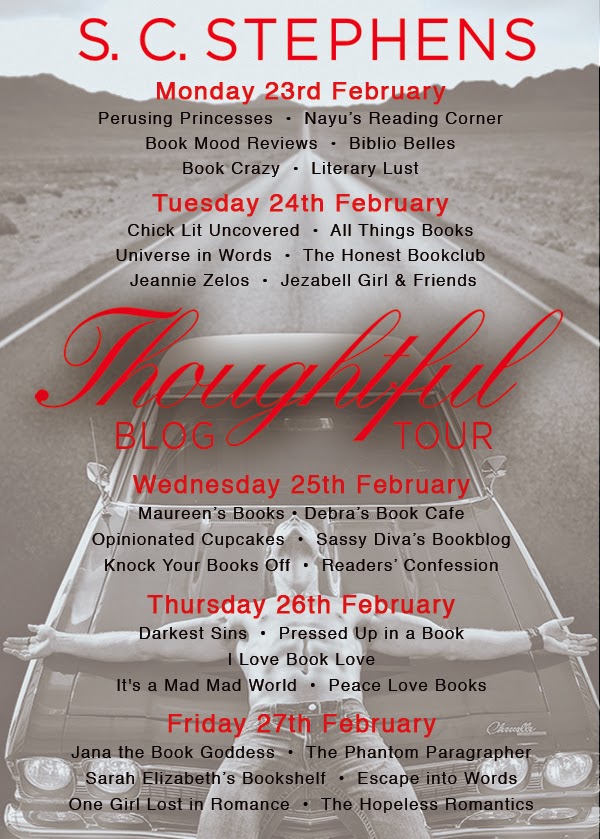