REVIEW - AMONG THE NAMELESS STARS BY DIANA PETERFREUND 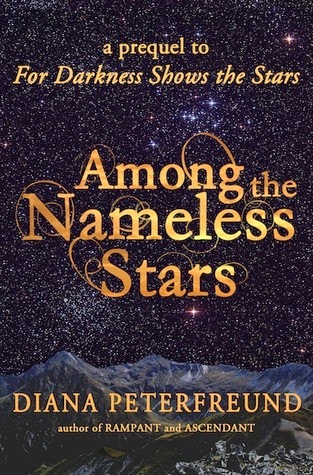 BLURB from Goodreads
Four years before the events of FOR DARKNESS SHOWS THE STARS, the servant Kai left the North Estate, the only home he’d ever known, and Elliot North, the only girl he ever loved, in search of a better life. But the journey was not an easy one.Featuring narrow escapes, thrilling boat races and at least one deadly volcanic wasteland.

INITIAL THOUGHTS
I read a short novella within an anthology by Diana Peterfreund and had been looking for a series by this author to start reading for a while. I'm not sure whether I should have read the first book in the For Darkness Shows The Stars prior to reading the novella but I thought it would give me a taster of the series, before I invested in the novel length books.

MY REVIEW
I downloaded this one for free from Amazon UK.
So this novella is set four years before first book takes place. The main character is Kai and the book is told entirely from his point of view and the letters he writes, or thinks of writing but never posts to Elliott. Elliot North is the girl that Kai left behind at the North Estate where he was born and brought up and had lived fairly well at, prior to leaving to gain his freedom and make his fortune. Elliott is the daughter of the Estate owner. When reading the book you realise as does Kai that he really had a fairly good life back at the North Estate.
Kai had wanted the Estate owners daughter Elliott, to sneak off with him, which was fairly naive, why should Elliott leave with him when he had nothing at all to offer her. As daughter of the North Estate owner, Elliott was used to the finer things in life, not having to work her way up the way she would have needed to if she had fled with Kai.
The journey across the wasteland almost cost Kai his new found freedom and even more precious he almost lost his life. Then things begin to look up for Kai until he catches the attention of one of the main men in the area. He is left little choice but to accept the mans job offer. Kai finds himself in a worse situation than he was on the North Estate.
Though Kai does seem to make friends wherever he travels, he trusts someone to help him in a scheme to become free of his new employer, initially this backfires and leaves him dreading his forthcoming punishment. However hope seems to arrive for him right at the very end of this novella. Maybe his dreams of travelling and having some sort of freedom isn't as far away as he initially thought.
So did I enjoy the novella?  Yes, I did. Though it was a novella, it was a great story in itself as well as a taster of what is to come in the series. I certainly want to read more.             Would I recommend the novella? Yes, it's a great way to see if you like the writing style of the author without initially committing to a full length novel. Would I want to read more of this series? Yes, I do want to read more of this series. Would I want to read more by Diana Peterfreund? Yes, I like the sound of her Unicorn series too.
Posted by Jeanz xx at 03:00