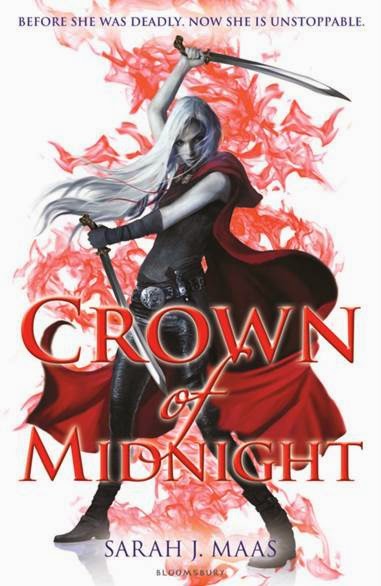 Crowned by evil.
Bound by duty.
Divided by love.

Before she was deadly, now she is unstoppable.

Eighteen-year-old Celaena Sardothien is bold, daring and beautiful – the perfect seductress and the greatest assassin her world has ever known. But though she won the King’s contest and became his champion, Celaena has been granted neither her liberty nor the freedom to follow her heart. The slavery of the suffocating salt mines of Endovier that scarred her past is nothing compared to a life bound to her darkest enemy, a king whose rule is so dark and evil it is near impossible to defy. Celaena faces a choice that is tearing her heart to pieces: kill in cold blood for a man she hates, or risk sentencing those she loves to death. Celaena must decide what she will fight for: survival, love or the future of a kingdom. Because an assassin cannot have it all . . . And trying to may just destroy her.

INITIAL THOUGHTS
The one thing bothering me about this one is that it's such a long time since I read Book One. Will there be lots of references to book one, to things I may have forgotten? Then there's the fact that I loved book one so much, so will this book live up to my quite high expectations for it?

MY REVIEW
First of all I should say a thank you to my daughter, Rachel of Rai29BookReadNReview for suggesting that I read this book. I was pondering a few titles and she was insistent I should read this book now! (To the point of getting my kindle and placing the e-galley in my "Reading Now" file!) She said I would love the book and I did!
I received an e-galley of this title from Netgalley and also a treasured paperback for our "keepers" shelf. I really like the ongoing theme of having Celaena on the cover in her "warrior mode". Its dramatic, eye catching and fits both the individual book, and the series well. I'm hoping for a paperback copy of Heir Of Fire to complete the trilogy on my "keeper's" shelf.
The book picks up more or less as the first ended. Celaena is the Kings Assassin, and basically kills whoever he wishes. If Celaena should step out of line, the King has threatened the safety of Chaol. Celaena has feelings that run very deeply for Chaol, and we learn in this book that he has those same deep feelings for her. The problem with them having a relationship is where Chaol's loyalty would be, if he ever had to choose between his love/loyalty to Celaena and his loyalty/servitude to the King.
Once again there's so much happening in this book. The King starts giving scraps of paper with names on for Celaena to murder, and she appears the "good little assassin" by providing proof of her kills to the King. There's also much more danger and conspiracies within Crown Of Midnight, which at times leave you wondering just who are the good guys, and who are the bad ones.
Archer appears back in Celaena's life, in fact his name is written on a slip of paper that the King hands to her. Can Celaena go ahead and kill the guy she used to crush on so much? This is also when we learn more about the extent of Chaol's feeling's about Celaena.
Nehemia is also all mixed up in the mystical/spiritual side of the book, helping Celaena learn some of the Wyrmarks. Nehemia finds herself in a very awkward position where a sacrifice may need to be made for the greater good. Who or what will the sacrifice be, and will it even be worth it?
We learn a lot more about Celaena in this book. I love the name Celaena! I have also grown to love Celaena as a charcter. Her character has so many facets, she is so many things to so many different people. Celaena bottles up her emotions a lot in this book to the point of explosion. Will she be able to control her explosive energy, to save those close to her that are in danger. Or by using her power is she just putting herself in more danger.
You do become more invested in the characters and plot in this book, it kind of grabs you and squeezes you tight! You do see the softer sides of some characters, that were previously portrayed as having all tough exteriors and very little heart & softness.
So did I enjoy the book? To be totally honest this book isn't of a genre that I read a lot of, but I really love this series. Would I recommend the book? I'd highly recommend it.
Would I read more of this series? Yes please, I'm seriously looking forward to book three after becoming more enlightened about Celaena's heritage. I'm seriously thinking of reading The Assassin's Blade (0.1 to 0.5), and the other novella's too!  Would I want to read other titles by this author? Yes, I'd like to read A Court Of Thorns And Roses too, the main character sounds like another tough female.
Posted by Jeanz xx at 03:00