THE GUYS ARE PROPS CLUB BY INGRID SEYMOUR 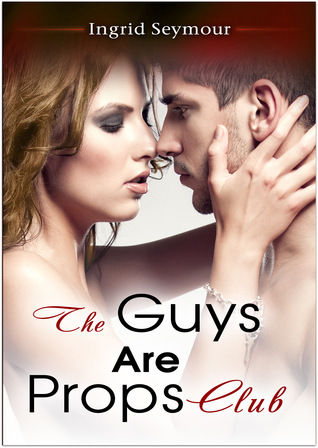 BLURB from Goodreads
During her senior year in high school, Maddie Burch promised herself not to ever fall for a cute guy – or any guy – again. Cute guys are players and not to be trusted, a fact she learned the hard way when her first boyfriend ran her heart through a paper shredder. Two years later, her promise is still intact, and she’s determined to make it through college without falling victim to another creep. She has her job, school and The Guys Are Props Club to keep her mind and hormones in check.The club was founded by Jessica, Maddie’s best friend. It is a sisterhood of girls who have fallen prey to heartless jerks and who have vowed to turn the tables. Once a semester, Jessica requires members to “do onto others as they’ve done unto you.” Setting the example, Jessica’s next play is Sebastian Capello, a theater major with heartthrob looks and a flair for Latin dance, whose heart she plans to break the way hers was once broken.What the friends don’t know is that Sebastian is different. Despite his perfect looks and popularity, he’s not a jerk. He doesn’t play games to get his way. Instead, he keeps it real and goes after what he wants with honest intentions. And what he wants is not a bombshell like Jessica, but a down-to-earth girl like Maddie – even if it causes a riff in the girl’s friendship. Even if it means getting Maddie to break her personal vow.
*** Due to language and sexual situations this book is recommended for ages 17 and older.

I received an e-copy of this book in exchange for my honest review and posting as part of the blog tour run by Oops I Read It Again Blog Tours
The cover features a man and a woman in a rather steamy looking clinch, which does suit a scene or three from the book. I like the font style of the title, and the way neither the title nor Authors name is infringing on the cover, which is good.
So the story is based mainly on Jessica and Madison, who have both had their hearts broken and trampled on by a guy or two. They decide to get together with other girls in the same situation, which all goes well, they get together and share their heartbreak stories. Then Jessica decides to take things further and suggest the girls make a kind of game of “playing the guys” You literally pick a guy, flirt etc, lead him on, go out with him a few times, then suddenly just dump him, hopefully breaking his heart in the process. It’s a type of revenge. There are also a set of rules, such as you can’t steal someone elses “Play” . . . . which ends up causing problems. Though Madison doesn’t wholly agree she gets swept along by the louder, domineering girl Jessica. Jessica has everything, her parents have money so she has no financial worries unlike Madison who is on a scholarship and has to budget carefully.
The girls end up breaking many of their Guys Are Props rules and end up falling out with rather disastrous consequences for Madison. Can the girls ever have the same close friendship again.
I won’t go into detail as I think if I say too much it will spoil the book. The book is well written, it’s a mixture of paces, sometimes there seems to be lots happening, other times the book seems to “drag it’s feet” somewhat. I saw the notice about the book being a 17+ so was expecting a little sexual content, but not quite as much as there was. Personally I’d say 18+ as in my opinion if it were a movie it would be 18+ Looking back now at the cover I should have realised that there would be some “spice and steam” in the book and I’m okay to an extent with that, but I thought the book was aimed at the New Adult or Older Teen market. Without the "steamy, sexually descriptive this book would have been ideal for the YA market too, and I think it would have been pretty popular too.
So did I enjoy the book? It was okay, I liked some parts better than others. I liked Madison’s interaction with Hunter the young cancer patient in the hospital she is working at. The parts I didn’t like were the in my opinion overly descriptive sexual scenes. The story really didn’t need it, more could have been left to the imagination. It's sad to say but at times I kind of felt "bored" in that I'd think oh not not another sexually related scene. Would I recommend the book? Being totally truthful here I probably wouldn’t go out of my way to recommend it. I would be more likely to warn about the content and suggest the 18+ age restriction. Would I read a Bk#2? The impression I came away with at the end of this book was that it was a standalone novel. Would I read other books by this Author? I would check the age rating on them first, then make an informed