REVIEW - THE AVIARY - THE UNCAGED SERIES BY EMILY SHORE 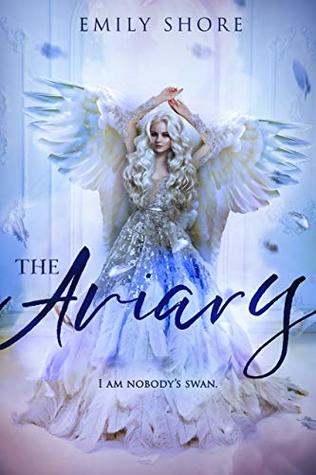 Sixteen-year-old Serenity has spent her entire life in hiding to protect her from this exact moment. In a world where beauty is bought and sold on the streets like a corporate commodity, Serenity's natural assets are more like liabilities. Despite her parents' best efforts, she's been taken—ripped from her home and the only life she's ever known—to find herself on sale to the highest bidder. And that bidder? Enigmatic and dangerous, Luc is the director of The Aviary—an elite museum where girls are displayed as living art by day…and cater to the lascivious whims of the highest bidder by night. In this elaborate and competitive world, girls go by names like Raven and Nightingale, and will stop at nothing to become top Bird.

Luc comes to idolize Serenity's purity and aims to turn her into his grandest exhibit of all time—The Swan. In no time, she becomes one of the most coveted exhibits in Aviary history. When she discovers Luc holds the key to finding her parents, she must learn to play The Swan to perfection…to win his heart and earn his trust. But she doesn't anticipate falling for him in the process. Now she faces an impossible choice: escape The Aviary and lose her only chance at finding her parents—or become Luc's Swan for good and lose her identity forever.

REVIEW
I had seen this book cover and fell in love with it quite a few months ago, whilst on a dystopian book group on Facebook. The beautiful ice blue hues of the cover with the silver white blonde-haired female dressed in an outfit made with white feathers, complete with wings made from feathers. As you read the book you realise the image on the cover is in fact the main female character of Serenity, when she is made into the Swan by Luc Aldaine, the director of the museum of birds. Once I read the blurb I knew I had to but it to read as soon as I could.

Serenity has spent all her life so far hiding in various homes or hotels as she travels with her family. IT is dangerous to be female as you risk being captured and sold. She never goes anywhere alone, if her parents aren’t with her Skylar is with her acting as her bodyguard, ensuring she doesn’t get into any trouble. So, it is quite irresponsible of her to sneak out after dark, after closing time to swim in the hotel pool. Serenity loves water and after waiting for Skylar to return she becomes impatient and reckless and decides to go for a swim alone, she really doesn’t see the danger and the water seems to call to her.
Serenity is captured and finds herself in a cage in the Glass District being sold to the highest bidder, which happens to be Luc Aldaine, director of the second largest museum. (The biggest being The Temple and is run by Director Force). The auctioneer wants to start the bidding at one hundred thousand dollars and is visibly shocked when a bid for fifty million is bid. Serenity finds herself sold. Not one to hold back or hide her feelings, when Serenity is removed from her cage and finds herself standing behind the auctioneer who just sold her she cannot risk the temptation of revenge. Serenity brings one leg up and kicks hard, landing a flawless bulls-eye into the auctioneer’s pudgy ass. She hadn’t intended what happened, which was the auctioneer to topple off the stage! Serenity has a sedative patch slapped onto her arm.

Serenity has been sold to Luc Aldaine, a museum director and amateur historian. His museum has girls representing different birds. Serenity is given the immortal implant, that removes any flaws in her skin and heals bodily injuries much quicker to heal. She is also branded with a silver feather on her shoulder.
It soon becomes apparent that Serenity is to be the jewel in the crown for the museum, she is to take up the role of a Swan. Luc has been searching for years for that one girl who would be his swan. Serenity is also valuable as she is a virgin. Her virginity will be something else someone will pay an expensive price for, and she will have no say at all who she will be sleeping with. It soon becomes apparent that Luc is somewhat obsessed with Serenity even though she refuses to give him her real name. As Serenity is such an expensive, envied commodity Luc hires a guard to watch over her. Luckily for Serenity, Skylar has managed to acquire this job, though as he is in the Bird’s Museum his name is Vulture. The girls at the museum call Luc, Director or Owl, which is probably why Serenity/Swan insists on calling him Luc. Serenity has to quickly learn how to put on the character of The Swan as well as what her rank is in the bird museum, there are a few birds only too happy to put her back in the position they think she should be in. All the girls are known by their bird, so Serenity becomes “Swan”.

When Skylar manages to be alone and not recorded in any way, he tells Serenity he needs to continue to act as if she is going along with everything, to give hm time to find out where her parents have disappeared to and rescue them. He also gives Serenity her mother’s journal saying she needs to read it as there are certain things, she now needs to know that her parents were keeping from her. Serenity already knows her father, Kerrick rescued her mother from the largest museum, The Temple which is run by Director Force who was a violent and cruel master to her mother who was his Unicorn. There are many revelations contained in the journal that Serenity hides in her wardrobe to read away from the camera’s and recording devices that are in the museum both openly and overtly.

I could honestly go on and on about this book, I truly loved reading every word of it. I particularly enjoyed getting to know the other girls/birds at Luc’s museum. It’s interesting to learn how the girls/birds ranking effects some of their personalities. So, the former top three positions belonged to Nightingale, Peacock and Blackbird. Serenity/Swan is warned quite quickly who she needs to stay away from if at all possible, by the caretaker she has been assigned, Dove, who also tells her that all the girls have a good life here at Luc’s, though Serenity thinks it is bad enough being stared at in the exhibitions and thinks it abhorrent that the girls/birds have to take private clients in rooms to make money for the museum. Despite promising Skylar that she will play along with being the Swan until he has freed her parents she is determined to escape before she has to go in a private room with clients.

Now onto my favourite characters, of course I instantly loved Serenity/Swan and Skylar/Vulture, I enjoyed their familiar relationship that at times allowed them to communicate without words. Hmmm, I sort of warmed, up to Luc Aldaine/Owl the director of the bird museum, I certainly didn’t instantly like him, I was more wary and waiting for him to do something awful and unforgivable to Serenity/Swan. It’s bad enough he bought her, a man thinking its acceptable to own women! Then you learn about the other museums and the fates that the “free” girls in the Glass District face on a daily basis. I did instantly want to protect the character of Finch, a hatchling, a young girl in training who takes a liking to Serenity/Swan. Finch is quite happy to sit next to Serenity/Swan at meal times they all attend together happy to steal food from her plate. It amuses Serenity/Swan and she adores the hatchling, tirelessly answering all her questions. At one point in the book, Finch is about to get punished and Serenity/Swan flings herself down some stairs as a distraction, which works when the other girls/birds then push Finch behind them out of sight. This does go some way into the girls/birds accepting Swan as one of them.
I also liked Blackbird, Mockingbird, Dove and Flamingo. I grew to like Nightingale throughout the course of the book too.

I found this book really easy to read, it is written in a way that it just flows beautifully. I was very keen on the world building and how the author introduced the girls as different birds, their characters, and personalities. I enjoyed the “mean girls” aspect that was in the book, with Nightingale as former head girl being surpassed by Swan. The descriptions and depictions of Finch made you cherish her as much as the other characters in the book do.

I really enjoyed reading this book, the society created, the world the characters created are living in and the different girls as birds is brilliant! I enjoyed learning the girls, different temperaments, looks and backstories as well as how well they matched the birds assigned to each girl. Seriously I hated having to put this book down to do chores or go to sleep! I found the book to be an amazingly different dystopian. What would I compare it to? The Lone City by Amy Ewing, The Belles by Dhonielle Clayton and also a little of the Perfected Series by Kate Jarvik Birch. I have added the rest of The Uncaged series to my “Want To Read” list and am looking forward to reading more when I get the chance.