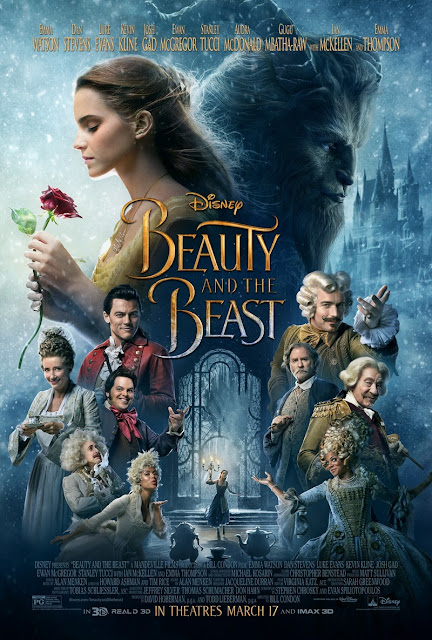 The story and characters audiences know and love come to spectacular life in the live-action adaptation of Disney’s animated classic “Beauty and the Beast,” a stunning, cinematic event celebrating one of the most beloved tales ever told. “Beauty and the Beast” is the fantastic journey of Belle, a bright, beautiful and independent young woman who is taken prisoner by a Beast in his castle. Despite her fears, she befriends the castle’s enchanted staff and learns to look beyond the Beast’s hideous exterior and realize the kind heart of the true Prince within. The film stars: Emma Watson as Belle; Dan Stevens as the Beast; Luke Evans as Gaston, the handsome, but shallow villager who woos Belle; Kevin Kline as Maurice, Belle’s father; Josh Gad as Le Fou, Gaston’s long-suffering aide-de-camp; Ewan McGregor as Lumière, the candelabra; Stanley Tucci as Maestro Cadenza, the harpsichord; Gugu Mbatha-Raw as Plumette, the feather duster; Audra McDonald as Madame De Garderobe, the wardrobe; Hattie Morahan as the enchantress; and Nathan Mack as Chip, the teacup; with Ian McKellen as Cogsworth, the mantel clock; and Emma Thompson as the teapot, Mrs. Potts.

So this is another remake. This time the classic Beauty & the Beast in a live action form as opposed to the animated version. To be totally honest I am super, super critical when it comes to Disney remakes or Disney animations turned into Disney live action. In that I love some I hate some, kind of like “marmite”.

Basically, it is exactly the same story with real life actors mixed with the excellent Animations/CGI we have come to expect from Walt Disney Studios. This version of Beauty & the Beast has lots of big musical scenes. I’m probably going to show my age here but the big songs made me think of the likes of Carousel and Oklahoma.

A character that performed flawlessly in my opinion was actor Luke Evans as Gaston, the arrogant hunter who desperately wants Belle to be his wife. Speaking of Belle, the honour of being her went to well known actress Emma Watson (probably best known for being Hermione Grainger in the fantastic Harry Potter Series). I honestly had my doubts as to whether I would truly like her as Belle but I was pleasantly surprised and ended up adoring her portrayal of Belle.
For me not everyone was cast 100% right so what I thought to the other actors/actresses . . .Though I did love Mrs Potts, both in animated form and in life/human form, I felt Emma Thompson portrayed her satisfactorily. However in my opinion, and you can call me an old softie but no one, no one at all could ever beat Angela Lansbury as Mrs Potts. To me Angela Lansbury is the perfect Mrs Potts! Of course, Mrs Potts is only half of the great endearing yet comical duo, with Chip being the other half. In this DVD Chip is played very well by Nathan Mack. Other animated favourites that underwent the transformation fairly well were Cogsworth, voiced and acted by Ian McKellan. Madame de Garderobe  was actress, Audra McDonald. Of course, there are lots of animated favourites to be transferred into this live action version of the film. Continuing with Lumiere, the candelabra, which was really well performed by Ewan McGregor. One quite sizeable difference in the animated version of Beauty & the Beast and the live action one was the “maid” as I remember her from books and the older animations. In this modern live action, the character is referred to as Plumette, the feather duster and is played by actress Gugu Mbatha-Raw. Maybe it’s just my memory that has mixed things up but I really thought she was dressed as a maid?!

So now what I personally thought to the DVD and this newer version of what I would describe as being a popular Disney movie. I felt there was not enough emphasis on Belle and the fact that she adores books. (Yeah, I do admit I identify with Belle & her books 100%). I felt some of the actors & actresses were trying to put on too much of a “silver teaspoon in your mouth” British voice. Some of the casting just didn’t feel the right “fit”. For me, there was a few too many big song productions, though they are done well. It felt like it was trying to compete with the big classics such as Oklahoma, Carousel and childhood favourites such as Bedknobs & Broomsticks. It just felt a bit too much. I wanted less songs and more backstory on my favourites such as Mrs Potts and Chip, Lumiére and Plumette and Cogsworth. I guess it comes down to personal taste.

My immediate thoughts after watching the DVD were that I still preferred the 1992 fully animated version. Emma Watson made a beautiful, believable Belle. Luke Evan’s the actor portraying Gaston was well cast. But I did not like the actor who played Beast when he is transformed into the human Prince, he just didn’t fit my vision of what the Prince should look like.
As soon as I finished watching the film, I did a list of how well I thought the actors and actresses were cast and portrayed. It's not a full cast list, just the stand out characters in the fairy-tale itself.
(I have scored a selection of them out of ten.)

So, have you watched both versions of Beauty & the Beast? Which do you prefer? Are there any actors or actresses you didn’t like or thought could be portrayed better by someone different?