REVIEW - THE TRUTH ABOUT ALICE BY JENNIFER MATHIEU 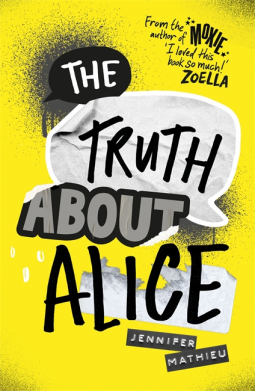 BLURB from Netgalley
Everyone knows Alice slept with two guys at one party. But did you know Alice was sexting Brandon when he crashed his car? It's true. Ask ANYBODY.

Rumour has it that Alice Franklin is a slut. It's written all over the 'slut stall' in the girls' bathroom at Healy High for everyone to see. And after star quarterback Brandon Fitzsimmons dies in a car accident, the rumours start to spiral out of control.

In this remarkable novel, four Healy High students - the party girl, the car accident survivor, the ex best friend and the boy next door - tell all they know.

But exactly what is the truth about Alice? In the end there's only one person to ask: Alice herself.

REVIEW
I felt in the mood to read something more contemporary for a change and when I read the title of this book it immediately made me curious, I wanted to know who Alice was and what her story was.

The cover of this book is bright yellow so really grabs your attention. When you read the book you realise that it is a representation of the toilet cubicle wall at Healy high. The title of the book is written in a social media/graffiti style that works well. The authors name is done in a font/style that could be a pupils name on their locker perhaps which continues the school theme very well. There is also a recommendation for how good the book is by Zoella the author of Moxie. This book should really stand out on a bookstore shelf!

The genres I've seen listed for this book are Children's fiction, Teens & YA which is the age group the book is aimed for and fits well. I would also add contemporary and realistic fiction to the genre list.

This book is set in and around Healy High and it's pupils. Healy is very proud of it's sporting achievements and the boys in the team often get given extra time or an extra helping hand to complete assignments.

This book's main character is Alice, a teenager who at the beginning of the book is firmly within the circle of the popular gang at school. Alice doesn't have an easy life, there's just her and her mother at home. Her mum is always going out leaving Alice at home to fend for herself. Being in the popular clique doesn't come cheap, you need the latest fashionable clothes, as well as the make-up and confidence to pull it all off. Alice has always done odd jobs here and there for people to earn her own money. During the summer Alice got a job at the sports centre where the older good looking male Tommy Cray and Mark Lopez both work as lifeguards. Alice's best friend at the time also hangs around and flirts with the guys.


Everyone that's anyone is at Elaine's party it is the place to be seen. Even though Elaine and Alice had a run in years ago about Alice making out with Brandon, whilst Brandon was supposed to be with Elaine. Though Elaine and Brandon were on and off so much I don't know how Alice was supposed to know if they were on or off! Anyhow Elaine certainly hadn't forgotten or forgiven. So when someone says that Alice has had sex with both Brandon and Tommy on the same night upstairs in one of the bedrooms during Elaine's party it soon gets around.

Then more fuel is added to the fire when the drunken Brandon Fitzsimmon's and best friend Josh Waverly are involved in a car crash. Brandon dies and Josh is taken to hospital but thankfully survives to tell the tale. Josh is of course questioned by the Police who have already tested samples of both boys blood and know they were well over the limit. Josh is stunned and set completely adrift by the loss of his best friend, Healy High star sports player Brandon. Josh really is devastated and when his best friend's mum comes to see him asking what happened, and if Brandon was distracted. Josh is still kind of shell shocked but manages to blurt out that Brandon had been distracted by texts from Alice Franklin.

So now the whole school has a real grudge against Alice as it is she that caused the death of Healy High's star sports player. That combined with the other gossip about her having sex with two different guys inn one night gives the popular girls enough ammunition to make her life hell. No one actually confronts Alice face to face.. It is all done behind her back by those she once thought her friends. Even best friend Kelsie shuts Alice out. In fact Kelsie goes even further to cement her place in the popular clique. When the popular girls, headed by Elaine are all in the toilets one day talking about how disgusting, and how much a slut  Alice is Kelsie just blurts out that Alice had an abortion too! The girls believe Kelsie as they know her stictly religious mum makes her go down to the abortion clinic to protest against abortion so it seems viable that if Alice went to get an abortion that Kelsie & her mum would have been there and seen her go in. The girls look at Kelsie quite doubtful of what she has just revealed. Kelsie panic's and has to quickly think of something to do that will ensure her place with the popular girls so she takes a black sharpie and writes something nasty about Alice then hands the pen to another girls. One by one they write something on the toilet cubicle wall which soon becomes widely referred to as the "slut wall".

I really liked the character of Alice, had she been a male character in the book who'd had sex with two girls on the same night at a party she would have been patted on the back and congratulated for it! It would have been another two notches to add to the belt or bedpost.
It just shows how society view things from totally different angles and their opinions differ depending on the persons gender. I don't want to give away the whole story or even hint at it so I can't really go any further on that point. I do feel sympathy for Alice. Even though Alice sort of shrugs her shoulders, keeps her head down and just tries to go through the motions of school. Even her schoolwork begins to suffer. Which brings me to my other favourite character in this book, Kurt Morelli, the quiet loner at school who is the nerd who is great at maths and science. His parents died in a car cash and he is being brought up by his grandmother. Kurt lives near Brandon, in fact they sometimes share a beer whilst sitting on Brandon's roof, though neither of them would tell anyone about this. Kurt and Alice become friends when he offers to help her with her homework. Initially dubious Alice thinks he wants sex with her but that is not Kurt's true intention. Sure I think if Alice had offered maybe Kurt would have thought about it but his feelings for Alice are more admiration and he is mainly wanting friendship.

My immediate thoughts upon finishing reading this book were that this was a very realistic tale that could well be happening in any high school near you.

It is the combination of a rumour, some gossip and a large portion of peer pressure that make what happens in this book so convincing and life like. The whole writing graffiti on the toilet cubicle wall that has been going on for years. It just takes that first person to set the ball rolling by being the first to write something. The book illustrate very well how one small lie can lead to another and how quickly it can all get out of control.