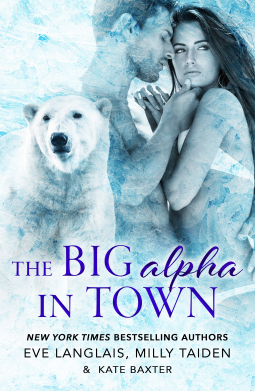 Bearing His Name
Meeting his mate should have been cause for celebration. There’s just one teeny tiny problem. Jade thinks Ark might have impregnated her sister. He didn’t, but convincing Jade is going to take a bit of honey.
Owned by the Lion
Keir’s been told to stop playing the field and settle down—difficult advice for a hard and hot man with a lion’s heart to follow. But his sights have always been set on Ally. She’s his mate, plain and simple. With her sweet and delicious curves, she’s nothing but sugar and trouble all rolled into one. But he’s known her and sparred with her for years. She’s his best friend’s little sister, and it’s going to take a whole new level of convincing that he’s the mate for her.
No Need Fur Love
Moving with his pack to the tiny town of Stanley, Idaho has Owen Courtney a little on edge. With literally no women in sight, Owen will be lucky to find a date, let alone his true mate. But you know the saying about a werewolf walking into a bar…

Gorgeous wood nymph Mia Oliver is on a mission: Find a suitable male to get her good ‘n pregnant and provide her with an heir. But when Mia decides to pick up a gorgeous and oh-so willing werewolf at the bar, she realizes she might be in over her head. …
Goodreads Link

REVIEW
Once again I was asked if I would be interested in reading and giving my honest review of this trilogy of steamy shifter tales by the publisher. After reading Thanks Fur Last Night trilogy and surprising myself by really quite enjoying it I decided this was a book I actually wanted to read. I was aware some of the content was steamy and maybe a little explicit but I feel there is enough plot and story line that I can still enjoy reading.

The genres I have seen listed for this book are Anthology and Romance which certainly fit. I would also add shapeshifter, and paranormal to that list too.

So this book is made up of three separate tales, Bearing His Name by Eve Langlais, Owned By The Lion by Milly Taiden and No Need Fur Love by Kate Baxter.

Bearing His Name
I really enjoyed reading this story. The central characters are Jade and Ark and I adored both of them. Ark receives what can only be described as a blackmail note accusing him of making someone pregnant! Ark approaches his cousin Stavros who is not only a bear shifter but also works for the Police too. Stavros reveals to Ark that he is not the first to approach him with a blackmail letter. It is Jade Cadeux that has sent the letters because it is her sister Ruby who is pregnant. When Ark knocks on her door and she opens it he instantly knows she is his mate! Though he knows better than to try to tell Jade that until they figure out who is the father of Ruby's baby.
I really enjoyed reading this tale by Eve Langlais, I liked how she played on the bear shifter and his love of honey and how he needed "honey" or rather had to sweet talk Jade quite a lot! Ark really has his work cut out to get Jade to believe him that he is not the father of her sisters baby. Ark has to use all his powers of persuasion because Jade's father abandoned her when she was younger so she is suspicious of any man.
I thought the cliff hanger at the end about Stavros finding a green eyed female by the bins was brilliant. I hope Eve Langlais tells his story of perhaps finding his mate soon. I am definitely interested in reading about more the family of Ark & Stavros.

Owned by the Lion
I adored this story, it is set around some of the same characters that are in Bought By The Bear that is featured in the Thanks Fur Last Night anthology. This time the lucky bear that finds his mate is Xander's best friend and work colleague Keir. Of course things don't go straight forward for him. Keir has a reputation for dating lots of different women and he thoroughly enjoys his lifestyle. His father wants him to take over the family business the bank and settle down, though Keir is reluctant to settle down with anyone he knows that he will have to take over the family business sooner or later. We meet more female characters this time and they enjoy playing match maker with Keir and Ally. In fact Xander and the others find it amusing that the one woman that Keir wants isn't falling at his feet as other women do.
I really loved this story and totally adored the fact I got to catch up with Xander and Josie as well as meeting new characters too. I definitely want to read more, both by this author and set in this world with its great characters. My favourite character in this tale had to Keir, he was so perplexed when Ally didn't just fall for his charms and into his arms straight away like most women usually did!

No Need Fur Love
I did enjoy this tale but I have to admit it took me a little longer to feel drawn into it. Once the story got going I didn't want to put it down! Again this tale takes place within the same setting as The Alpha And I was. (from Thanks Fur Last Night)
The two main characters that are mates in this story are Owen a hot werewolf shifter and Mia a beautiful, mysterious, conniving wood nymph. Mia's father wants to choose her a mate and for her to get pregnant to produce an heir! Mia doesn't want an arranged match so she comes up with the idea to go out and get pregnant, thinking that if she produces the heir he wants he will not force an arranged pairing on her. It just happens that Owen is sat in a pub drinking and thinking he will never find his mate. He readily admits he is jealous of his Alpha Liam who has found his true mate Devon. Mia just happens to be searching for someone to make her pregnant in the very same bar and she soon sets her eyes on the rather hot looking guy at the bar.
There is so much going on in this tale, there's the werewolves settling into their new territory oblivious to the fact that there is a group of wood nymphs with a crazy male leader who wants them out of what he considers his territory. Why can't they co-exist there is lots of land and space for both groups. I really loved the character of Owen. To begin with he is so overwhelmed that he has set eyes on his mate he gets carried away and they fall straight into bed. It's when he wakens the next day and Mia has gone that his worries begin. Naively he thinks its because Mia doesn't understand the true mate bond. Between the deception by Mia an the war Mia's father wants with the werewolves there's loads going on in this tale. I really didn't want to put it down. I would certainly love for more tales about Owens pack as shifters are one of my favourite paranormal beings to read about. I admit I was a little skeptical about a wood nymph's as I haven't read about them before but Mia was an interesting character, though werewolves remain my favourite!

This anthology as a whole was a really great read. I enjoyed reading more by these authors, and definitely would want to read lots more by them. I readily admit I have avoided books and authors who write erotica but having read a couple of tales by Eve Langlais I would be interested in reading other titles by her now, though not those labelled as erotica. I found I loved all the tales and certainly want to read more by all these authors.

My immediate thoughts upon finishing this anthology were, Wow steamy, sizzling hot shifters! I want more!

Once again, this great anthology has indulged my love of werewolf shifters and also introduced me to other shifters and paranormal beings. I always used to be of the opinion that I loved only werewolf shifters but these anthologies have encouraged me to read about other paranormal beings, such as the bear shifters, lion shifters and wood nymphs. I honestly loved revisiting the settings and characters from Bought By The Bear by Milly Taiden and The Alpha And I by Kate Baxter, which featured in Thanks Fur Last Night. I would love more stories in all the settings featured in this book. Are there going to be more anthologies and when can I read them?