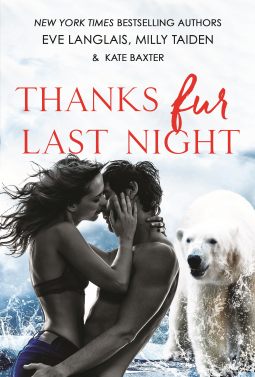 BLURB from Goodreads
Bearing His Sin by Eve Langlais
Cole should have killed Anja the moment he realized she was his mate. Instead, he let her live and now they’re on the hunt, chasing the morons who think they can force her to marry another man. Like hell. And while this shapeshifting bear might have his share of sins, he’s not going to let little things like murder and mayhem prevent him from having the woman meant to be the keeper of his heart.

Bought by the Bear by Milly Taiden
Josilyn Martinez just needed the money to help raise her nephew. That's it. There's no other reason she would take a job posing as a shifter's mate so he can assure his grandmother he's settled down. There's no reason to stay at his place so they learn "more about each other." And there's definitely no good reason she should get involved with the hard, hot, and handsome shifter that's hired her.
Xander just needs a fake mate for a week to get his grandmother off his back. But what's a bear shifter to do when the impostor mate he hired turns out to be his actual mate? All sweet, luscious curves and a heart of gold, Xander's not going to let his mate get away. Now all he has to do is show her that they belong together, one kiss and touch at a time...

The Alpha and I by Kate Baxter
Devon Kincaid is happy with her new life in Lowman, Idaho. Her little bar on the outskirts of the tiny, isolated town is doing well, and she’s not even interested in finding a man. But when she finds a bleeding man—a hot, hard, handsome, naked bleeding man—in the snow one night, Devon brings him home to care for him. He’s definitely not like any man she’s ever met before, but what she doesn’t realize is that he’s not just a man…


Liam Murphy isn't simply a werewolf. He's the Alpha. In a heated battle with a deadly bear shifter, he's moved his pack to the Sawtooth Wilderness in order to draw danger from them. He was hoping to escape his problems—but the last thing he expects to find in the isolated Idaho wilderness was his mate. Fragile and unfamiliar with the violent supernatural world, the only way he can protect Devon is to make her what he is: a werewolf. He only hopes that in the process convincing her to enter fully into his world, that he doesn’t drive away the one woman he can’t live without.

REVIEW
I approached reading this novella with trepidation as I know through checking on Goodreads that both Eve Langlais and Milly Taiden have series that are classed as erotica and it is a genre I usually steer away from, but this anthology is listed as paranormal romance and it was suggested I may enjoy it as I love shifter books so I decided to give it a go. For Kate Baxter I have found her books listed as paranormal romance so feel I should certainly get along with her novella okay. I haven't really read anything before by these authors but decided this Anthology would be a great way for me to try out three new authors.

The cover background has either an ocean or lake with a bear splashing his way through it, this part of  the cover could certainly fit a scene from within the first novella by Eve Langlais. In the foreground of the cover is a rather passionately kissing couple. I love the title with the play on the word Fur/For. I immediately understood it and it made me smile and want to know more about the anthology.

The various genres I have seen listed for this anthology are Paranormal, Fantasy and Romance, Anthologies and I agree with those genres. I would also add it to "Novella's" as the Anthology is made up of three novella's.

I think the blurbs for each novella give away enough about them so my reviews are merely my personal thoughts and views on the individual title.

Bearing His Sin by Eve Langlais
So I'm being totally honest, as always, this did have rather explicit or what I term as erotica type descriptions which at time were a little off putting, but I guess that's down to my own personal reading preferences and my personal comfort zone. I found this novella a bit slow to start off, and felt it jumped about a bit too much and was in my opinion fragmented somewhat. I stuck with the novella and in the end I found a fairly good read. Would I want to read more titles by Eve Langlais . . hmm maybe.


Bought by the Bear by Milly Taiden
This novella was a faster paced read and even though it had some steamy hot scenes they were so well in context that it felt "right". I loved the character of Josilyn, how she is working a quite literally back breaking job to feed herself, but more importantly her nephew Nick, whom she has cared for since his parents died in a car accident. I adored the way the once womaniser Xander was totally out of his depth with Josilyn. I did really enjoy this novella, so much so I've put some other titles by Milly Taiden on my Want To Read List already! I really didn't want this novella to end!

The Alpha and I by Kate Baxter
This novella was also a really good read, enough to make me check out the authors other available books too! I love that Liam the Alpha werewolf who is used to everyone doing as he tells them without question has to try and go against his alpha nature and not just tell Devon how things are going to be. I liked the element of the whole will she choose to become a werewolf and the process and was a little disappointed when we didn't get the whole bite scene etc. The third novella in this anthology and the second one that I didn't want to end. I could imagine reading a whole series about the fantastic shifters in this novella!

So the anthology as a whole was a really good one. I've discovered two new authors I'd like to read more of. I usually avoid anything that has been labelled erotica like the plague but the publicist that recommended these authors to me thought I would love this anthology, so I decided to give it a go, not knowing what to expect and ended up with a great surprise read and a couple of authors I maybe wouldn't have given a chance before.

My immediate thoughts upon finishing this anthology were, Will definitely be checking for other titles by these authors. This anthology definitely allowed me to indulge my love of the werewolf & shifter genre.