Addiction and redemption, love and despair. Clean will have you hooked from the first page. 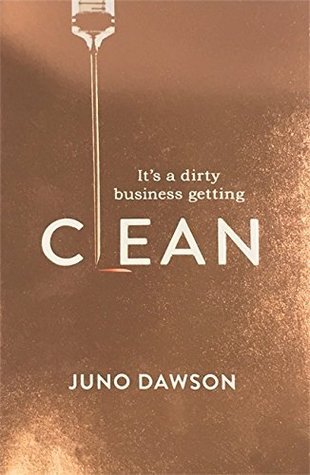 BLURB from Goodreads
A razor-sharp, adrenaline rush of a novel from award-winning author Juno Dawson, Clean is Gossip Girl meets Girl, Interrupted.'I can feel it swimming through my veins like glitter ... it's liquid gold.'When socialite Lexi Volkov almost overdoses, she thinks she's hit rock bottom.She's wrong. Rock bottom is when she's forced into an exclusive rehab facility.From there, the only way is up for Lexi and her fellow inmates, including the mysterious Brady.As she faces her demons, Lexi realises love is the most powerful drug of all ... It's a dirty business getting clean ...

REVIEW
The cover initially attracted me to this book, making me curious as to who was having the needle, what was in it and why etc. Also being totally honest and up front I had read a few mixed reviews about this book, suggesting it should carry trigger warnings and that it covers sensitive subjects etc and I wanted to know what the fuss and controversy was all about!

The cover is quite stark, with the background possibly a clinical tabletop or perhaps a dressing table top with a syringe and some liquid from it forming the L in the title Clean. I think the cover certainly has an impact and instantly makes you wonder what is going on with the needle. There's also the sort byline on the cover which when you include the book title says "It's a dirty business getting clean" The cover really fits the book in its title being Clean and the cover design being clean too.

The genres I have seen listed are Teens & YA and Contemporary which I personally think fit the book well. I think the book would also fit the NA category too. It also has a "coming of age" "angst of being a teenager" vibe too as the different characters all have different types of addiction.

As I mentioned above the book deals with all different types of addiction and shows different ways that the individual characters and the families of those addicted cope and try to come clean in the controlled and safe environment of the Clarity Centre.

The central character in the book is Lexi Volkov who is the privileged daughter of the Russian Volkov's that own so many luxurious Hotels. In fact Lexi and her older brother Nikolai live in suites within the different hotels their parents own. Lexi and Nikolai's parents have divorced, mum is off doing her thing in the Cayman Islands and her father has his new younger model girlfriend, so maybe that's why they haven't seen their daughter is seriously out of control. Lexi is the ultimate party girl who attends all the parties places "one should be seen at."

So their are so many great characters that I really liked and want to mention in my review. I'll start with Dr Isaac Goldstein - really came across as a sympathetic, understanding man from the very beginning. Then later in the book he reveals something about his own past which answers the question as to how and why he is so empathetic about addiction. I'll briefly mention the fact that the Clarity Centre has been set by a couple, one of whom we meet in the book because their son struggled with addiction and they saw the lack of places to help teens troubled by addiction.
I thought the relationship between Nikolai Volkov and his sister was amazing. It shows how much Nikolai really felt for his sister that he dragged her off to "rehab".
I could go on and on about the fantastic characters of Kendra, Brady, Sasha and the others but that would spoil the way you learn of their individual addictions.

I thought the interaction towards the end of Lexi's stay at the Clarity Centre with a rather tough, brash character called Sasha, who ends up trying to get off the island via a boat was amazing. They were both scared, unsure, in need of help and both had addictions and emotions to deal with yet they only had each other. Do they both crack their tough "I don't need anyone" attitudes and survive their escapade? That is just one reason you have to read this book!

My immediate thoughts upon finishing reading this book were that is was a totally different genre to my usual reads but that I had really enjoyed reading this one. It's very different to other books out there at the moment.

So as I explained earlier in my comments, I had read a few mixed reviews about this book, suggesting it should carry trigger warnings and that it covers sensitive subjects etc. The thing is I want to give my opinion but without going in to detail and giving away spoilers, so please excuse me if I seem a little vague at all. There are many sensitive issues within this book centering around addiction, grief, sexuality, and toxic relationships but these are issues that our teens of today are facing. In fact it isn't just teens, its pre-teens too in our "full of pressure" world. To be totally truthfully, in my own opinion I think that this book, read in the right setting, could help many more people than it could hurt or offend. I'd go so far as to say that I believe it may make an excellent conversation starter. It could be read by teens at schools, then the "issues" within the book openly discussed. Hey I know not everyone that reads this book may think that but in today's instant communication age and our teens being more candid and forthright with their opinions I think I'd almost say it really is a "must read" book. Our society needs to learn to be more tolerant of others. We have never all "been the same." As a society we may have once put on a "front" and presented an image of conformity and had strict ideas of what "normal" is. Today's more forthright generation see no reason to conform, or hide away any "problems, issues or addictions" they may have.