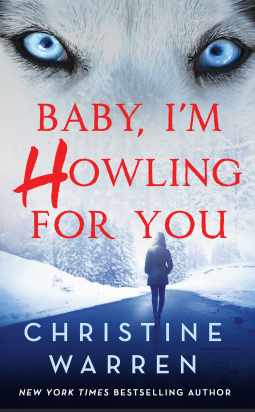 BLURB from Goodreads
WELCOME TO ALPHAVILLE, where the she-wolves and alpha-males play. . .for keeps.Renny Landry is a wolf on the run. Pursued by a shapeshifting stalker and his slobbering pack of killer coyotes, she is forced to flee her job as a librarian to find sanctuary in the wooded hills of Alpha, Washington. A well-secluded safe space for troubled shifters, Alpha is Renny’s last hope. But the first person she meets there is a gorgeous alpha male with fiery eyes, fierce tattoos, and one ferocious appetite—for her…Mick Fischer thought he left his past behind when he moved to Alpha. But fate has a way of biting him in the tail when a female wolf shows up on his property. Wounded, desperate—and disarmingly hot—Renny brings out the snarling, protective alpha beast in Mick like no other woman he’s known. Can these two haunted, hunted wolves manage to mate for life…even as the deadliest past demons howl at their heels?

REVIEW
I only discovered this series when I was asked if I'd be interested in being part of the Blog Tour by Justine at St Martins Press. ./After reading Something To Howl About, I knew I wanted to read much more of this series! I was hoping to meet more of the Alphaville residents, maybe even learn more about the characters of Jonas, his family and the newcomer, Dr Annie Cryer that I had already met in Something To Howl About.

The cover has a woman walking along a road, surrounded with forest that is covered in snow. After reading the blurb I automatically guess this lonely female figure is Renny. At the top section of the cover is a wolf shifter with piercing blue eyes, maybe Mick? The shifter on the cover would attract my attention to at least pick up the book to read the blurb, so I'd say it does its job well.

The genres I have seen listed for this book are Paranormal, Fantasy and Shapeshifter which all fit well. The label of shapeshifter fits as there are not only werewolves in this book, there are bears, lions, lionesses, cougars and coyotes. I love a good shapeshifter book though admittedly I usually stick to werewolves so the other shapeshifters were a new element for my that I found I did enjoy.

The book begins with Renny on the run from a group of coyotes, she is heading to the once place that may offer her help and refuge, Alphaville. Alphaville is a place that is populated by various different shifters. So Renny doesn't feel so guilty if the coyotes follow her there, as it is a place where there are no fragile humans. Renny has been on the run for quite a while now. She just seems to settle and then Geoffrey locates her again and sends his coyote bullies to find her again and the she has to pack p and leave as she doesn't want to endanger humans. Renny's car runs out of fuel so she quickly abandons her car and clothes and shifts to her small red werewolf form and runs as fast as she can knowing she is well out numbered should the coyotes get her cornered somewhere. Renny does end up fighting and being injured but she doesn't give up as she knows what fate awaits her if the coyotes catch her and take her back to their Alpha Geoffrey. Geoffrey made it clear to Renny that he wants her and though she tried to let him down gently at first, then ended up being more forthright and flatly saying no! Geoffrey gets what he wants and he is obsessed with getting her irregardless of her feelings, or rather lack of  loving feelings towards him! Renny is fully aware she is running for her life! She desperately needs to get inside somewhere or find people as this will discourage the coyotes from attacking her. Blindly running, with the coyotes hot on her heels she ends up almost on the doorstep of Alpha werewolf shifter Mick.
Mick has lived at Alphaville, or rather the outskirts of Alphaville for sometime now alone. he doesn't interact with a lot of people preferring to keep himself to himself. Mick lost his mate Beth and has been alone ever since. When he see's Renny in her red wolf form she reminds him of Beth so much he automatically protects her from the coyotes and telephones for help to come and sort out her wounds. Its not long until Mick realises his inner wolf has decided that Renny is theirs!! and though Mick can be stubborn, his wolf is determined and it's not long until Mick joins his wolf in wanting to claim Renny.
Now Renny isn't alone and has made a few friends she relaxes a little hoping her being around other shifters will put off Geoffrey and his coyote crew. Sadly for her it doesn't, in fact the coyotes seem to think its acceptable to attack Renny in broad day light in the middle of Alphaville. Naturally Mick takes it upon himself to protect Renny and enlists the help of Aplhaville's Police and Mayor and a few other shifters willing to fight and get rid of the coyotes, including Geoffrey once and for all.
I don't want to reveal any more of the plot as it needs to be revealed as you read the book for yourself. I enjoyed the writing style and pace of the book. It has plenty of great characters with the promise of more in future books too.

I really liked most of the characters in the book. I loved the way both Renny and Mick could feel their mate bond but were both very wary of discussing it with each other. I enjoyed how though they both felt and instant bond, they developed their relationship a little slower and didn't always see eye to eye. Renny may be a small werewolf and Mick a large werewolf Alpha that is much bigger than her but she still stands, digs her heels in and readily argues for her own way and her own indeoendence.

I also really liked the brother/sister banter between Zeke and Molly. A quirky character in the book is Marjory Caples, the current librarian who is desperate to retire and very eager to train her replacement. I love the way she speaks to Mick as though he is a naughty boy and she is his school teacher. It's really funny to read how the tough, grumpy Alpha, turns meek, mild, well mannered host when Marjory visits him to speak with Renny.

I also think the character of Geoffrey is also really well written and I thoroughly enjoyed hating him and his coyote henchmen too.

My immediate thoughts upon finishing this book were that I loved the main characters of Mick & Renny as well as some of the others such as, Zeke & Molly. There's plenty of action right up to the end of the book. I didn't want to put it down! I am seriously looking forward to reading more of this series.

I really loved this book, as well as the prequel novella Something To Howl About too. The pace of the book was perfect, I really did not want to put this book down once I began reading it. If you love shifters, then I think you'll really enjoy this book. It does have a couple of explicit steamy scenes but they are well within the context of the plot of the book. I definitely want to read more of this series as well as check out Christine Warren's The Other Series as well as some of her other series too.