REVIEW - SEVEN DAYS OF US BY FRANCESCA HORNAK 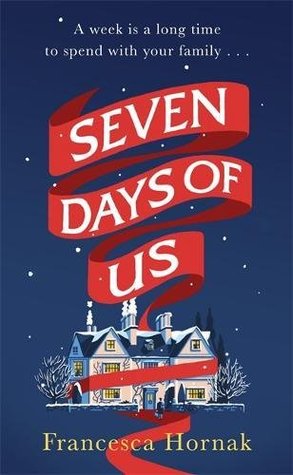 BLURB from Goodreads
A warm, wry, sharply observed debut novel about what happens when a family is forced to spend a week together in quarantine over the holidays...It’s Christmas, and for the first time in years the entire Birch family will be under one roof. Even Emma and Andrew’s elder daughter—who is usually off saving the world—will be joining them at Weyfield Hall, their aging country estate. But Olivia, a doctor, is only coming home because she has to. Having just returned from treating an epidemic abroad, she’s been told she must stay in quarantine for a week…and so too should her family.For the next seven days, the Birches are locked down, cut off from the rest of humanity—and even decent Wi-Fi—and forced into each other’s orbits. Younger, unabashedly frivolous daughter Phoebe is fixated on her upcoming wedding, while Olivia deals with the culture shock of being immersed in first-world problems. As Andrew sequesters himself in his study writing scathing restaurant reviews and remembering his glory days as a war correspondent, Emma hides a secret that will turn the whole family upside down. In close proximity, not much can stay hidden for long, and as revelations and long-held tensions come to light, nothing is more shocking than the unexpected guest who’s about to arrive…

REVIEW
After discovering a few general/contemporary genre reads I have enjoyed I felt like reading another, but with perhaps a Christmas feel to it too. This one fitted that bracket well.


This book has various covers, in fact I have featured three of them below in a cover compare feature. The cover shown above is my favourite of the covers I have seen. It has a very Downton Abbey-esque house featured on the cover which when reading the book we discover is Weyfield where the Birch family have planned on spending their Christmas in quarantine. The cover has a subtle festive feel to it with the smoke coming from the chimneys at Weyfield and the snow falling.  The red ribbon weaving around on the cover with the book title within is very appealing, perhaps representing the ribbon on a Christmas gift also adds to the festive feeling of the cover. I think this cover as been done very well meaning the book cover appeals regardless of the time of year.
I love the byline of "A week is a long time to spend with your family. . . ." as you read the book it becomes more and more apparent that though all the characters at Weyfield are family that they seem to not know one another very well. all the characters have communication issues with each other.

The genre I have found listed for Seven Days Of Us are General Fiction, Contemporary and Christmas/Holiday. I agree with all the genres and would like to add there is a little dash of Romance within the the book too. Though Christmas is featured in the book I would go so far as to say it is a book that could/should only be read at Christmas. There is a strong feeling of family and individual relationships inside the family dynamic. The book has a lot of different emotive issues featured within it. I would say that it contains a snippet of comedy too.

I felt immediately pulled to this book by its cover and blurb. I don't know what the initial thing was that attracted me to the book but I just really fancied reading it. From the very start of the book I felt pulled into it. It certainly captured my interest and held on tight to it. I really looked forward to curling up in bed with this book to read each evening.

I'll tell you a little about the basics of the book, Olivia is the eldest daughter of Emma and Andrew Birch doesn't often come home for Christmas. However Olivia has been away volunteering abroad treating the Haag virus. There she has met a gorgeous man and they have been secretly starting a romantic relationship even though it is against the rules, as Haag can be spread so easily with body fluids. So when Olivia returns she will have to be quarantined a full seven Days, and her parents have agreed to be under quarantine thinking its a small price to pay for some quality time with their eldest daughter. The younger sister of the family Phoebe is not so happy about the quarantine and the fact she won't see her boyfriend for a whole week.

The Birch family decide to have their quarantine at Weyfield, which is Emma's original home that has been passed down through the generations along with its customs. This family Christmas is especially significant for Emma as she has just learnt she is very ill but more tests and treatment cannot start until after Christmas. Emma decides not to tell her family as her illness means she is more susceptible to contracting illnesses. Emma knows if she reveals this fact that her thoughtful, older daughter Olivia will spend her quarantine elsewhere. Emma wants a family Christmas, knowing it may very well be her last. So Emma rushes round purchasing gifts for her girls who so rarely even speak to each other now. Emma reflects on how her daughters are polar opposites, though she hopes being together during the quarantine may bring the whole family closer to each other.
The other characters are introduced Andrew the father who has his own secret that is threatening to come right up and literally fall through his door.
There's Phoebe who is so materialistic and just wants to be married so much she doesn't really stop to wonder if she is with the right guy for her.
As well as the family we have the characters of Jesse and George. George is the "new money" that wants to marry into "old money" and the prestige it would bring, but then it is revealed he isn't overly sure what or who he wants along with who he really is himself either.
Jesse is a totally different guy who knows what and who he wants from his trip over to the UK. He has left his adoptive family behind this Christmas in the hopes he can search and find his last living birth parent.

The book is very well written and you become quite engrossed in the characters, their individual secrets, as well as their hopes and dreams for the perfect Christmas and beyond. ?It certainly soon becomes apparent that the quarantine is going to be the least of this families issues over Christmas!! Secrets & surprises, some possibly good some already sadly bad. This book builds the suspense slowly but surely in more than one plot line keeping the book a very captivating, interesting read. I like the books format of being diary/blog 'esque.' from Andrew Birch's reviews of restaurants, to Olivia's blog about her time treating the Haag virus. Then there are the secret phone calls Emma makes when she can get telephone reception, ringing her friend  for support and to talk about her own secret. This book really is a tangle of twists of fate, and of strange coincidence.

Part of the way through the book Phoebe finds out about her mums secret when sneaking a look at wedding venues on her computer. Phoebe is a rather selfish, materialistic character at the very beginning of the book. What ever drama occurs her first response is how this will affect her. In fact Phoebe actually promises not to say a wrod about her mums secret until after the quarantine yet blurts it out in an angry exchange with her older sister Olivia. Olivia also mysteriously begins to feel ill. She has already had the awful news her colleague is in isolation in hospital with the Haag virus. Though he had taken many more risks than her Olivia is still worried she may be coming down with the virus herself. Poor Jesse ends up stumbling into all this drama himself quite by accident really. It's a stroke of luck for the family as when Olivia collapses and the Birch clan basically freeze and don't know what to do, Jesse takes charge of the situation.

My favourite characters were Emma, how strong she tries to stay, keeping such large news to herself so as not to spoil Christmas for everyone else. I love how she attempts to still do the Christmas traditions despite the other family members being openly reluctant to do so. I also really loved Jesse, who on the spur of the moment books a flight to the UK. Having stalked his remaining live birth parent online and learning what area they live in he heads there alone. Explaining to his adoptive family he feels he has to go to the UK to record some footage for a project he is doing. Jesse tries to contact this birth parent via email on numerous occasions. Other favourite characters were Olivia and Sean, but I think that was more to do with their illicit relationship and the fact the fact they cannot contact each other due to keeping their relationship quiet for a while so as not to get into trouble with their volunteer administration. As well as the fact Weyfield seems to be in a black spot for communications.

I really don't want to say much more about the book as you need to uncover the characters secrets as they are slowly revealed in the book for yourselves. I thoroughly enjoyed reading this book all the way through it. This book is actually a debut novel for author Francesca Hornak, and I have to say its a great start. I loved the style of it centred around different family relationships and the different forms of communication used for example Olivia's blogs and her emails to Sean that at first she knows he is not well enough to answer. Olivia seems to use these emails as therapy, a way to cope with not being able to just pick up a phone and speak to him. I liked the little intricacies of the different family relationships, so you have Olivia and Phoebe, like chalk and cheese. Olivia doing good in the world and so caring about others willing to sacrifice materialistic things to help them. Then there's Phoebe who is only interested in planning her wedding. Even when she discovers her mothers secret her first thoughts are for herself, her wedding venue and even wondering how her mums secret will affect her wedding photographs!

My immediate thoughts upon finishing this book were that it was very different to my usual fantasy/paranormal genre reads.This is a more contemporary genre based on the Birch family. I have to say that I loved it and had a tear or three in my eyes as I finished reading the book. You ride along with the emotional highs and lows for each of the characters featured in the book.