REVIEW - MUTTS LIKE ME - THE AWAKENING BY KERI ARMSTRONG 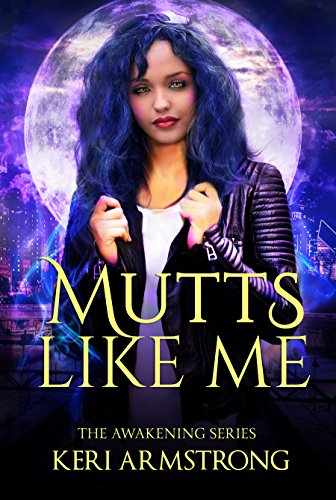 BLURB from Goodreads
All I ever wanted for the holidays was to have my family together. Unfortunately, with my mother dead, my grandmother drunk most of the time, and my dad... well, who knew who he was, much less where he'd disappeared to. No brothers, sisters, or cousins that I knew of. Until now. I just found out there's a whole other world out there that I'm a part of, thanks to my dad. Who it turns out is a freakin' werewolf. And still missing, by the way. But now it seems I might be able to track him down - if I can just survive long enough to learn the truth about what happened to him, and somehow resist the pull of the silver-eyed fox who kidnapped me. Happy flippin' holidays to me. Mutts Like Me. The stand alone first in a series set in the world of The Awakening, where every supernatural creature you ever heard of is not only real, they're coming out of the closet and into the streets.

REVIEW
To be totally truthful I really fancied a paranormal shifter book to read and I had downloaded this one when it was either reduced price or free, so decided it was the right time to give it a go.

At first glance I really liked both of the covers I had seen for this book but I have pictured the one I preferred above so will start by describing that one. The background shows tall buildings, with a full moon also present. The main focus of the cover is the female on it with all her black curly hair and unusual eyes. As I began reading the book I automatically thought the female was the main character Marti. However after finishing the whole book I'd say that the female on the cover could also be Cass. Both females are wolf shifters with eyes that change colour. This cover would make me pick it up from a book store shelf as the females eyes, the kind of swirly blue mist and moon all suggested shifters and/or magic to me. So yep this cover does its job perfectly.

As you can see below the other cover features a male and female, whom I would say are Marti and Toshi, but there seems to be something not quite right in the skin and angle of the womans pose to me that makes it look awkward. There is the addition of a cryptic byline featured on this cover which says "Getting kidnapped by a sexy shape-shifter wasn't on her wish list, but maybe it should have been" which is good. Would this cover (below) have made me pick it up from a bookstore shelf? I'd like think I would still pick the book up to learn more, as if not I would have missed a good read! 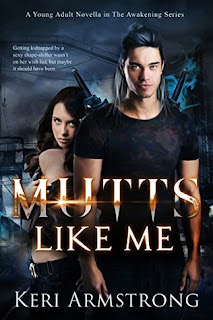 So we meet the main character Marti who is at this time living with her alcoholic grandmother. Marti's mum died years ago and her father . . well she doesn't know his name or anything about him. Her grandmother is drunk as is usual and collapses on the floor. Marti gets a pillow for her grandmothers head and a blanket to cover her then attempts to sleep herself. Only to be awoken by a strange male figure bent over her. This stranger we later learn has been watching over Marti for a while knowing she would be experiencing her first shift soon. Her father had planned to be there to explain everything to her but he is missing so its Toshi that ends up taking things into his own hands to try and help Marti. The last thing he wants is to draw attention to them so when she screams he squeezes a pressure point in her neck and she fades into unconsciousness. The trouble with that is that now Marti knows nothing of who the people are that have her or what they want. Naturally Marti is suspicious and scared of those around her.

There is a complicated story within the book about people known as "The Awakened" and the fact they want to kill all the shifters. I found that I could have done with "The Awakened" to be explained a little more to fully understand everything that was going on. I loved all the interaction between the various shifters and how poor Marti had to learn what she was and how to control it in the midst of all the fighting and action.

I loved Marti as a character, she has to deal with a pretty big loss in the middle of learning she is a wolf shifter. Then finding out about her dad only to be told he is now missing! I was also strangely fond of the current kick-butt alpha female Cassandra who took an immediate dislike to Marti which I think is because she is jealous of the chemistry in the air between Marti and Toshi. There are lots of different shifters in this book, Toshi is a Kitsune, Alex a fox, Sunjoo a dragon to name just three!! There are more wolves and kitsune, witches, nago/snakes as well as many hybrid cross-breeds. I think as this book hopefully develops into a series and we will meet even more paranormal's and be introduced a little more thoroughly to the Awakened.

There's plenty of action within the book, but I will say that thee are parts that don't quite flow together as well as they could. there are also a few formatting and grammar issues along with the odd missed word here and there. I don't know how else to describe it other than it need tightening up a little. I still read and enjoyed the book its nothing so major that it totally spoils the book. It left me wanting to read more of the series.

My very first thoughts upon finishing this book were that it was a good start to a potentially highly addictive series. It's a brilliant mixture of Shape-shifters, Witches and Vampires. There's also so much more to be revealed about Marti's father and the continuing battle with the Awakened too.