REVIEW - THE BARRIERS - THE BREEDERS SERIES BY KATIE FRENCH 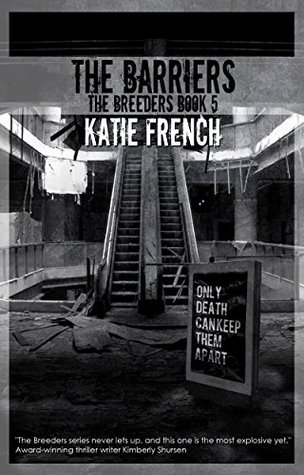 BLURB from Goodreads
Riley hasn't seen her boyfriend Clay or her nine-year-old brother Ethan for two months. Between violent road gangs and ongoing clashes between the Breeders and the Free Colonies, are they even still alive? But Riley will never stop looking. Her search takes her to Kirtland Air Force Base, where she finds the remains of a battle and one glimmer of hope: rumors of the boys heading toward the Free Colonies and a man who can help her get there. The only catch? He nearly murders Riley the first time they meet. Meanwhile, Clay, Ethan, and Betsy struggle to steer clear of bandits, thieves, and slavers. Their water is gone, along with Clay’s memory and Ethan's patience for Betsy, who only makes things worse by trying to convince Clay they're in love. With Clay's mind muddy, it’s up to Ethan to keep them alive long enough for Riley to find them. The route back together is paved with trials—and how many more have to pay for their freedom with their lives?

REVIEW
So after reading The Brothers and learning more about Riley's mother, Arn, and Auntie Bell as well as who Riley's biological father was, I really wanted more Riley & Clay! I also want more of the other characters of Ethan/Cole, Auntie Bell and of course Doc. It's so clear he has feelings for Riley though her heart belongs firmly with Clay.

Again with this book there are two covers. I have shared the cover for the book when I originally got it and it is featured above. Once again it has the grey, worn, battered and broken scene. This time it is the escalators in a shopping mall, or as we would call it in the UK a shopping centre. This is a scene straight out of the book where Riley has to brave its deep, dark depths, in exchange for using technology to attempt to trace Clay and Ethan. I really like that its a scene from the book, I also think the cover immediately tells you its genre of post apocalyptic.

The Barriers still has the two separate groups desperately trying to survive and be reunited with each other. In one group led by Riley is Auntie Bell and Doc. Doc still has a real crush on Riley despite having had no encouragement from her. Riley has been totally honest always searching for her one true love Clay. The other group is led by Clay, who is still extremely confused from the surgery that his mother Vanessa Vandewater did on his brain. Also in his group who was quite literally the guinea pig for the brain operations is Betsy. The only one in the group who doesn't have memory or behavioural issue dues to their brain being operated on is Ethan. Though Ethan is Riley's younger brother he goes along with the fact that Clay thinks he is his younger brother Cole who died years before and Clay carries a lot of guilt around his tragic death.
So in this book we meet some new characters along with Riley that are scientists, geneticists and doctors that used to work for Vanessa Vandewater. This group of scientists are led by Dr Corra Washington they have been left the Breeder Hospital a while and they didn't leave empty handed, they took some of Dr Vanessa Vandewater Plan B experiments. Corra says that here in an underground facility they have found they are attempting a supposedly kinder way of getting their "subjects" pregnant. They are working on shortening the gestation and somehow speeding up the fetus growth cycle. Unfortunately not all the subjects are willing and Subject Seven has become overly aggressive. Subject Seven has managed to break out of the underground facility and taken one of the other subjects too. Subject Eight, that has been taken, is an even more valuable one because its easier to handle and is much more placid to work with. Corra insists to Riley that they do not hurt the subjects and that they have a better life than the ones with Vanessa Vandewater.
So Corra cuts a deal with Riley, she has to go find and return Subject Eight alive and uninjured. In return Corra will use the facilities technology to help search for Clay & Ethan, so that instead of wandering around searching Riley, Doc and Auntie can go directly to Clay & Ethan.
Clay is on a similar mission. Betsy is doing her best to convince Clay that he is her boyfriend. Clay manages to wander off whilst Betsy sleeps, Ethan doesn't notice because Betsy has locked Ethan away as a punishment for  not going along with her plan to replace Riley in Clay's affections. Betsy & Ethan and Clay end up "captured" by a nearby settlement. They have to barter for freedom/acceptance in the group, which involves Clay taking a home made unstable bomb through a ventilation system to blow up the nearby underground facility.. .. ..

So there's lots of potential for tragedy in this book with both Riley and Clay finding themselves yet again in really dangerous situations. More of the stark realities of Dr Vanessa Vandewater's Plan B experiments are revealed and once again Riley finds herself being pulled right into the centre of it all. Things seem to be going from bad to even worse for both the main characters, Clay and Riley both on missions they must complete before they can reunite with others in their group to then search a for each other. Having said that the situation is far from safe or perfect for those they have left behind or have being prevented from being on the mission with them, (as in Auntie Bell, and Cole) This book is certainly action packed and keeps you guessing what will happen next! Could Plan B actually have worked even if only partially? If some of the Dr's have achieved this from a couple of test subjects, what had Vanessa Vandewater accomplished in the basement of the Breeder facility??

I'm looking forward to the next book, and am eager to find out what happens with the extra addition that tagged along with Riley when they all parted company with Corra and the scientists. I'm also interested to see if Riley's secret will revealed that she had to hide in this book. Will she tell Clay? How will she cope herself? How will life turn out for them now? Where will they live? Will they get any peace? Will they be able to join the free colonies?


My very first thoughts when finishing this book were . . .Absolutely love this series! Looking forward to reading more. When's the next one available?!