Today, as part of her Virtual Book Tour, I have the great pleasure of hosting Lisa April Smith, who has agreed to answer a few questions. Welcome, Lisa.
Thank you for inviting me, Sandra. Great to be here. 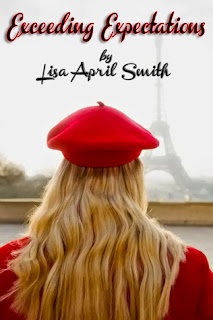 If you could have any author of your choice (dead or alive) over for dinner and a chat who would that be?
Tough decision. I think if I had to choose one it would be Mark Twain (Samuel Clemens). He was a brilliant author, entertaining speaker and daring social commentator. Portraying black characters as brave, loyal, admirable human beings with souls, he took a stand against slavery and social injustice. Black or white, his characters were memorable, flawed and real.  Clemens’ life was dotted with failures, loss and personal tragedy, but he was known for his wit and engaging disposition. He was often billed as a “Humorist.” How I would love to sit down with him, over dinner and wine, to listen and learn.

If you found a magic lamp and were permitted to choose another career, what would you choose? Do you have another job as well as writing?
If that magic lantern could give me incomparable talent, I’d like to be George Gershwin’s successor. (No point in wasting a magic wish opportunity by aiming at anything but the top.) Being an incredibly talented painter would be my second choice. It’s second because, as much as I love art, with the exception of Picasso, it’s hard to find an artist that made a decent living and lived a long happy life.
And do I have another job as well as writing?  I have many, just none that I get paid to do.

If you found a magic lantern and were permitted to choose another career, what would you choose?
If that magic lantern could give me incomparable talent, I’d like to be George Gershwin’s successor. (No point in wasting a magic wish opportunity by aiming at anything but the top.) Being an incredibly talented painter would be my second choice. It’s second because, as much as I love art, with the exception of Picasso, it’s hard to find an artist that made a decent living and lived a long happy life.

If Exceeding Expectations was made into movie, have you given any thought as to casting?
That’s a question often put to me at book events. I can see George Clooney as Jack Morgan at fifty. He has the talent to play serious and comedic roles, and the looks and sex appeal to play Jack. The problem is, what actor could make viewers believe that he’s George Clooney at twenty-five? Maybe false eyelashes would help. Deborah Previte, the Bookish Dame, thinks Raul is Andy Garcia’s clone. I’d love to hear suggestions from readers. As for my heroine Charlie, I see a young Gwyneth Paltrow playing her. Sadly, I don’t know how to turn back time.

The first chapters of your books are free on your website but we’d love a short excerpt. Can you do that without giving away too much of the story?
She raced toward his front door. Alan caught her as her hand reached the knob. Tears cascaded freely down her cheeks and chin. To his astonishment the slight figure collapsed into his arms. She clung to him as she sobbed — massive body-racking sobs. A new emotion overtook him, flooded his being like a powerful narcotic. Growing up with four older brothers, an alcoholic father to knock him about, and only an overburdened sister to look after them all, Alan had never been the object of compassion or warmth. If pressed, he could not explain what he felt as he held Nicole in his arms. He had known passion and desire. He knew the companionship of friends. He knew pain and laughter. But simple tenderness had eluded him.
Where do you get your inspiration?
My books are generally inspired by media coverage of events and people that I find intriguing. In 1998, television and newspapers were reporting a story of a local socialite (ironically named Fagan) arrested for kidnapping his daughters eighteen years earlier, when they were 2 and 5 years old. The primary reason that it had taken eighteen years to find Fagan was that he had successfully reinvented himself. As William S. Martin, a handsome widower with two young daughters and no apparent means of support, Fagan had met and married a wealthy widow. After their divorce, another affluent woman agreed to wed and maintain his family’s plush lifestyle.
Neighbors, friends and the teachers at the girls’ tony private school all described him as “likeable,” “charming” and “devoted father.” Throughout his arrest and subsequent proceedings, his loyal third wife steadfastly stood by him, as did both daughters. Perhaps what most surprised people who followed the case was that the girls’ mother, a research scientist teaching at the , through the media and her attorney, repeatedly begged her daughters to meet with her and they refused. To my knowledge, that continues to this day.
As I was following the case I found myself thinking that there was an even juicier story behind this headline-grabber and set out to create one. I began with a few core facts. A man with an invented name and history, twice married to wealthy widows, living in , playground of the mega-rich and famous, and involved in a crime. Two adoring daughters unaware of their true identities. Over time my imagination happily supplied the rest. A townhouse off . A sprawling estate in . Romantic Paris in the years prior to WWII. A riveting past for Jack Morgan: skilled lover, lack-luster artist and irresistible rascal. A full-blown range of challenges and hard-wrought triumphs for his traumatized daughter Charlotte (Charlie).
Do your books require much research?
Absolutely! Some books more than others. I’m a stickler for accuracy. When I find the 2nd or 3rd critical error in a book or movie, that’s it for me. I’m done. Fortunately, I love history and find research fascinating. I estimate that for every researched detail I use, thirty are waiting to be plucked from my Word files or taking up needed space in my brain. Is it any wonder I have problems remembering names?

What particularly pleases you about writing fiction?
The creative experience. I’ve always envied painters, sculptors, composers. Imagine applying oil to canvas and fashioning a masterpiece. Imagine hearing wonderful music in your head that hasn’t been heard before. Imagine turning a shapeless lump of clay, or block of stone, into an object that produces emotions in viewers. Writing is an art too. With words as their sole tool, authors weave them into stories and place invented people into invented problematic situations. If the author is truly skillful, she not only entertains, she touches, transports and meaningfully moves readers. That’s a powerful and addicting drug.

I understand that Exceeding Expectations has a sequel. What is the title and when will it be available?
Thank you for inquiring. It’s a question I love to hear. Readers have been asking when it will be available, practically since Exceeding Expectations launched. It’s titled Paradise Misplaced and fans can expect it about six months from now. Check my website http://www.LisaAprilSmith.com for updates.