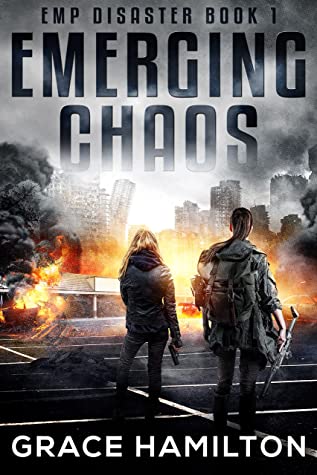 BLURB from Goodreads
No power. No lights. A world in chaos…

When a Coronal Mass Ejection causes an EMP catastrophe that shuts down power worldwide, Melanie Pearson must embark on a dangerous journey to reunite with her husband and daughter. But to earn a spot in a secure fortress along the way, she agrees to help her boss find his own son first. And it quickly becomes clear she may have made a deal with the devil himself…

Meanwhile, her husband Mark vows to do whatever he can to protect their daughter Shona. There’s no way to turn the power back on, and their home town of Knoxville is quickly descending into chaos. His only goal is to find a way to get his family to safety.

As they struggle to come together, this fractured family must face off against a society gone mad. And when even greater tragedy strikes, they will need to find a new way to survive. But what is the cost of survival in a world on the brink of collapse?

REVIEW
It was the cover that initially attracted my attention and then once I read the blurb, I knew I really wanted to read the book. I have also read other books by this author so like to take a look at other releases written by her. The cover shows two armed women looking at a fire that is nearby. This could actually be a snapshot of a scene from the book, the two women being Melanie and Lizzie. The cover does its job well as it encourages you to wonder who the women are, why they are armed with guns and what is going on around them.

The book begins with two of the main characters, Melanie and Lizzie being coerced into staying after clock off time to tidy up after the Christmas Party at Beaton’s food factory, where they have worked for years. It used to be a great place to work with their previous manager, but since his son, Derrick took over things have changed and not for the better. Despite most of the other workers leaving, Melanie & Lizzie are crawling about on the floor under the tables cleaning up spilled food and drink. It’s when they are tidying reusable items away that they discover a closet full of supplies that are about to become very useful.

Then the EMP hits and Melanie & Lizzie are compelled into helping their rather miserable, overbearing boss to help him track down his son, Nathan who sneaked out of the factory and is now outside alone in a breaking down world. Things are rapidly going downhill, people are taking whatever they want from those who have it at gunpoint! It soon becomes apparent to the two women that they cannot reason with people like Derrick and those around them, they have to become tougher and fight for what they need. It becomes rapidly apparent that Derrick is more than just a prepper. Derrick has plans, big plans to be in charge of his very own safe haven, the Beaton’s Food Factory! Any supplies Derrick doesn’t have, he will send his mini army of fellow preppers out to take at gun point if necessary. When Melanie and Lizzie realise the true horror of Derrick’s big plan, and what life would be like living under his dictatorship they decide they need to get away from him, but he’s not an easy man to get away from. Despite the fact he has found his son, he doesn’t want to let the two women leave. Whilst Melanie and Lizzie are being forced at gunpoint to stay with Derrick, trying to work out an escape plan whilst avoiding being shot. Melanie’s husband has found their daughter Shona, and they are trying to find Melanie. In fact, they end up finding Melanie and Lizzie at a pivotal moment for the two women. The Pearson family and Lizzie realise just how bad things have got when they get to Lizzie’s parents’ address and find her parents injured. When Mark is possibly fatally injured it soon becomes apparent the nearest and maybe only place to access the supplies they need for Mark is Beaton’s Food Factory.

If I had to pick just one favourite character it would have to be Melanie, who seems to have had a rather chequered past, but the skills she was very proud of at the time and the fact she actually taught some of them to Lizzie’s dad end up coming in very useful. It seems like Melanie has been through a lot in her life and it only really began to turn for the better when she came in to contact with her best friend, Lizzie and her parents.

I really enjoyed reading this book and felt pulled in almost immediately! The book began relatively “normal” with two women being almost forced by their rather overbearing boss to stay behind to clean up the Christmas party. Then the EMP hits and the world changes rapidly to an extremely dangerous place when it is ruled by those with the most guns! The book ends on a real cliffhanger, with Melanie and her group of survivors under attack, though this time they are in a slightly better position.

My immediate thoughts upon finishing this book were, that this was a really great start to a potentially brilliant series.

To sum up I am looking forward to more of the characters, more of this world and definitely eagerly awaiting more of the series!