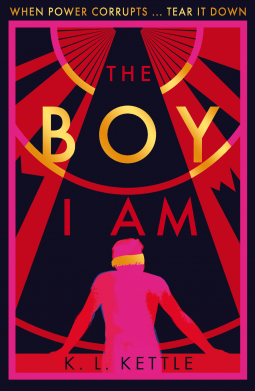 Title: The Boy I Am
Author: K. L. Kettle
Publisher: Little Tiger Group, Stripes Publishing
Genre: Teens, YA, Thriller, Dystopian, Suspense, Futuristic
Release Date: 7th January 2021
BLURB from Goodreads
They say we’re dangerous. But we’re not that different.Jude is running out of time. Once a year, lucky young men in the House of Boys are auctioned to the female elite. But if Jude fails to be selected before he turns seventeen, a future deep underground in the mines awaits.Yet ever since the death of his best friend at the hands of the all-powerful Chancellor, Jude has been desperate to escape the path set out for him. Finding himself entangled in a plot to assassinate the Chancellor, he finally has a chance to avenge his friend and win his freedom. But at what price?
Goodreads Link
PURCHASE LINKS
Amazon US
Amazon UK
REVIEW
The cover was the thing that first caught my attention, it instantly made me think of The Handmaids Tale by Margaret Attwood. Then the blurb made me think of The Lone City Series by Amy Ewing which as I adored this book had to go straight on my Want To/Must Read List!

The odd thing was as I began reading the book, the very thing that attracted me to it (it reminding me of The Lone City Series by Amy Ewing, but with the gender roles reversed) ended up making me feel put off by it.

The central character we follow during the book is Jude Grant, or lot 150 when he is being viewed for ladies to bid, or reserve him. The rich females of this society are the ruling class, they are the ones objectifying and those purchasing the boys at auction. The other women in this society work in the different houses, such as the House Of Peace, being the Lice (police).

Boys have to work their way up through dormitories, gaining merits, in the hope one day before they are too old, they will either be chosen or be able to buy their way into the House Of Boys. The House Of Boys then trains them to dance, smile, how to walk, how to dress etc in the hope they will be bought by one of the women from the richer houses. The richer the women the better the lifestyle for the boy they buy. A lot of the women have had their family merits handed down to them as opposed to earning them, as perhaps the less wealthy women have to, to make their way up in social standing. Unfortunately for the boys in this society the very best they can hope for is to be bought by an affluent woman. The boys are born with the debt of the males, they are named after. The boys are also charged for the time and care they receive in the Surrogacy House. There are no “relationships” as we would recognise them. Boys are “made” and put to work, as well as being trained to become wards of those women affluent enough to purchase.

Life at the House Of Boys is not easy, naturally there's rivalry, some camaraderie, a lot of bullying, that turns quite violent at one point within the book. Prior to being purchased at auction the boys that are on the “House Of Boys” have training and have appointments with women. The women can just come for a chat with their friends and be served by one of the boys of their choice. Or it can be more of a one on one, meeting, though the boys have to be given permission to speak and of course are still blindfolded. There are rumours of life “outside” the Houses within the Tower. The Chancellor says it is inhabited by people she refers to as “Hysterics”, and they are dangerous. All Jude wishes to do is be bought by the Chancellor as he has a plan, he needs to carry out. Walker, one of the Chancellors currents wards who is charge of some of the boys training.

At the head of everything is the chancellor, a devious woman who both men and women are afraid of. Even those rich women at the head of the different Houses do not totally agree with some of her practices and the things she wants to change, and the alterations and operation she wants to have done to the boys. The boys are prepared, groomed, taught dance, encouraged to look good, all in the hope of bringing a good price at auction. Boys can also be given cosmetic surgery by those who have appointments with them. These boys really are at the whim and mercy of the rich women who are ruled over by the Chancellor.

In this society being bought by a rich woman really seems to be the best these boys can hope for. Can one boy called Jude possibly change this society? With the help of a daughter from one of the richest houses, maybe they can...maybe there is hope and help outside the walls of the tower.

My favourite character is Jude despite all the horrors and mistreatment Jude goes through he still tries to help those around him where ever he can. Jude is so trusting and thinks people are his friends and even when they stand by whilst he is beaten by other boys, he doesn’t blame them. Jude worries about the girl that smells like rain, the one that books him for appointments, especially when she cries. I adored the “relationship” Jude has with Ro, a female debutante from an influential family, yet to choose which House she will work in.

I loved the writing style of the book, the way Jude is constantly having an internal dialogue with the boy who the Chancellor bought at auction last year. That boy was called Victor, or Vik by the other boys. Jude doesn’t know whether Vik is alive or dead, or just “gone.” The book may be a work of fiction but it really deals with a lot of difficult subjects, with violence, rape, and discrimination being just three of them. I thought the small quotes/poetry at the beginnings of the different sections of the book were a really great idea. This book was a change from the usual case of females being portrayed as the weaker sex, the slaves, lower class and the oppressed. Instead, it is males that are being used as slaves, sexual objects, and as entertainment.

My immediate thoughts upon finishing this book were that this book has once heck of a twisting, turning plot!

Summing up, I really adored this book, the characters and what an ending! The plot and universe created by the author certainly keep you on the edge of your seat, holding your breath. How the plot ended it makes sense as a standalone book, however if there was going to be more, I would be interested in reading more about Jude and Ro, and this female led civilisation. It would be fascinating to learn, if and how Jude could change the universe and future of society.